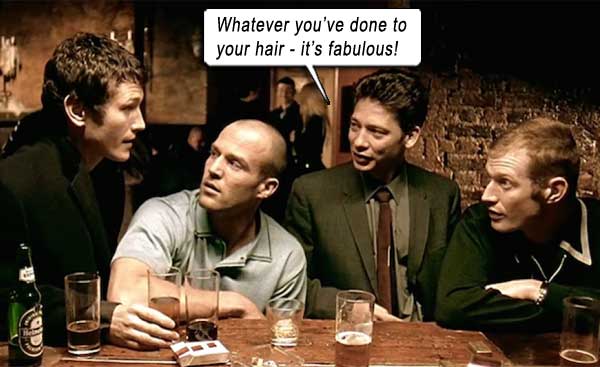 LOCK, STOCK comes at us with two smoking barrels.

“Right! Let’s sort the buyers from the spyers, the needy from the greedy and those who love me from the ones who don’t…” 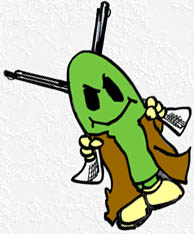 Bacon (Jason Statham) and Eddie (Nick Moran) work a street crowd with their hot merchandise. Cops. They flee. When the film suddenly crashes into super-slomo, and a hard, street-savvy narration kicks in (Alan Ford‘s voice) telling us of Bacon’s and Eddie’s street chicanery on its last legs, we hark back to the opening of PULP FICTION (where Tim Roth and Amanda Plummer are dialoguing intriguingly and cooing like lovebirds over coffee in a diner one minute and in the next, suddenly viciously holding up the joint). Like PULP, this Guy Ritchie-penned and -directed trash whore promises to be a dialogue-luscious film with a rabid style all its own.It is.

With a frenetic energy that few films today possess, LOCK, STOCK AND TWO SMOKING BARRELS is the work of a film-maker who remembers that movies are, first and foremost, Entertainment. Guy Ritchie is Danny Boyle (TRAINSPOTTING, 28 DAYS LATER) on crank. 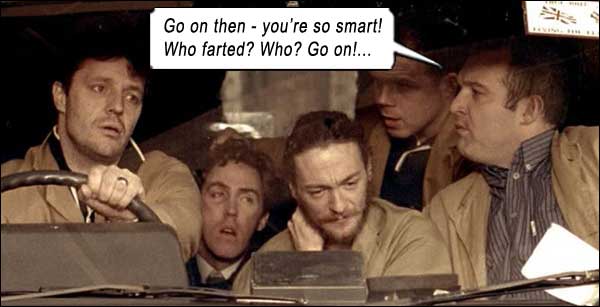 So begins Eddie and the boys’ crooked quest to deliver “half a million knickers” to Harry before Harry’s bulldog, Barry “The Baptist” (Lenny McLean) starts claiming their digits as vig.

That’s the short version. In the final telling, LOCK, STOCK – filmed with a leached look that makes London look even stinkier and gloomier than it actually is – is a Mobius strip of black comedic robbery and nihilistic bloodletting, shot through a revolving-door of criss-crossing, cross-killing, kill-switching plots.

Concurrent with our desperate hero foursome (calling them anti-heroes does not even suffice for their level of “anti,” so let’s drop the prefix and stop pretending we don’t support bad guys), there are the dazed and confused marijuana farmers led by the willowy Winston (Steven Mackintosh), whom we first meet inanely arguing over locking the front gate; there are Eddie’s neighbors, a gang of thieves as ruthless as they are inept, led by a chilling sadist, Dog (Frank Harper), whom we first meet as he swipes golf balls off the nose of a victim while machete-ing another hanging upside down; there is a black gang of giants led by a cockney midget with a fashion-challenged ‘fro, Rory Breaker (Vas Blackwood), whose introduction to the story sees him setting a man on fire for insisting he change the pub television channel; then there are the two clueless, low-rent bandits (Jake Abraham and Victor McGuire) who burgle the smoking barrels of the title with knicker-knotting consequences; there’s Big Chris (Vinnie Jones), a merciless hitman who is yet intent on raising his son with manners, and a hardened bar owner, JD, who shuns the maelstrom, not for want of street-cred, but because he is miles beyond mustered (played by Sting, as hard as the day he formed The Police).

With a source-music soundtrack that swivels effortlessly between savage, scarring guitars to ska figures and traditional Jewish plinkings, and slang so rich your ears will gain ten pounds (“not with Liberia’s deficit in ya skyrocket,” “orders an aristotle of the most ping pong tiddly in the nuclear sub”), LOCK, STOCK wends its complex way to a furiously satisfying climax, twists aplenty and a final shot that will renew your faith in creative storytelling like a date with a drunk Hans Christian Andersen.

This movie is a modern classic.

No matter the Serious Critics denigrating style over substance, LOCK, STOCK – stylistic to a fault – defiantly does not lack for substance. It is no secret that the nature of the medium is reliant on style, so it is as silly to say that a movie should lack “style” as a rock band should lack “image” – these are the selling points of the products. Style is an integral aspect of a modern director’s toolbox and Ritchie has consciously chosen to present his product this stylishly – and his cup overfloweth with substance too.

Yet Ritchie’s stylistic verve earns him his share of detractors, some rationally decrying the new breed of crash-cutting, shotgun storytellers, some just too slow-witted to keep up with the swagger of the Ritchies, Tarantinos and Boyles – subsequently, there are only two ways to take this movie: either not at all, or lock, stock and two smoking barrels…