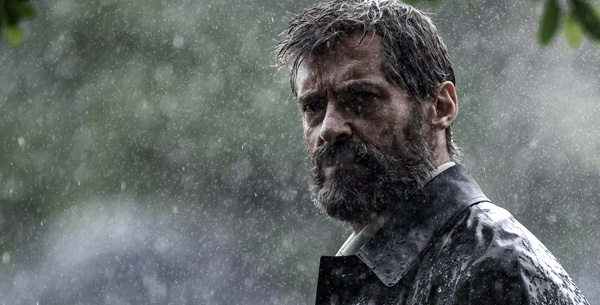 I call this look “Park Bench At Sunrise.” You like?

Bring Your Daughter To The Slaughter…

It’s not really a swansong for Logan. It’s not exactly an elegy for The Wolverine. No, LOGAN is actually the final curtain for Hugh Jackman as Wolverine. Because Jackman, so perfectly cast 17 years ago in X-MEN, became so adamantium-grooved into the character, that he is inextricably identified with the Canadian mutant known as James Howlett/Logan/Wolverine. So in order for the 48-year-old Jackman to hang up his claws righteously and go have a donut, he also had to bring the character to an end. Thus, we must ask ourselves, who then are we crying for when the final cross is turned sideways to mark an X over the grave?

There will be spoilers. If you haven’t guessed by now.

Sad, somber and ultra-violent, LOGAN is truly – as Hugh Jackman hoped – the UNFORGIVEN of superhero movies, where we meet the anti-hero well past his prime, forced to go on one last quest, and inadvertently finding a bittersweet redemption. 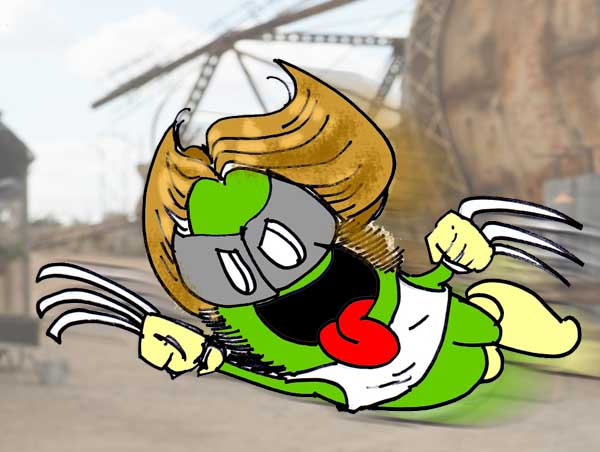 Elegy for a Cucumber…

Year 2029. All the mutants with the form-fitting costumes and metrosexual hairstyles are dead, and no more mutants are being born. Professor Charles Xavier (Patrick Stewart), now in his doddering nineties, is in hiding with Logan (Jackman) and another mutant named Caliban (Stephen Merchant – yes, the man behind THE OFFICE, in an excellent dramatic turn as the albino tasked to care for Xavier and hurl insults at Logan. We never quite figure Caliban’s mutant power, except maybe making his whining bearable due to his British accent.). Logan has adopted his birth name, Howlett, and drives limos for seedy clients along the Mexico/U.S. border, planning to save enough money to buy a boat and sail off into the sunset with Xavier, who is slowly losing his mind. It’s a pipe dream, fluttering around the edges of sanity, as their existence also seems to be.

The adamantium in Logan’s skeleton that makes him invulnerable is poisoning him, faster than his mutant healing factor can regenerate his cells. As he painfully pushes bullets out of his chest wounds, it dawns on us that he is becoming mortal. Whether it’s a blessing or a curse, Logan is finding out the hard way.

I will say, it’s a shock to the system seeing Jackman/Wolverine in this pathetic physical state: though he’s still built like a freight train, he limps, he’s shoddy, unwashed, unshaven – his infamous half-beard has grown into an unambiguous full beard (is there nothing sacred?) – and he’s keeping himself drunk and irritable. Logan is sad, exhausted, distrustful, and when he goes berserk in this R-rated movie (a trait that could never be fully realized in previous PG-13 outings), the violence is brutal and blood-drenched. Charles Xavier is also worn out, feared and discarded by society, his telekinetic powers not entirely under his control. No matter how much we might pine for the simple cartoon characteristics of old, LOGAN is not for the weak-hearted. 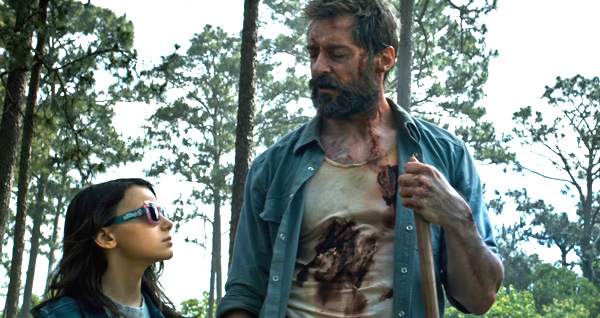 “So this is how Bruce Willis feels during a DIE HARD movie.”

And the language! I do declare, Beauregard! Well, I never! It is easy to digest Logan swearing like a street scrapper, but to hear Xavier swearing is jarring; I mean, he’s a learned professor – even if he put up with Logan’s potty mouth, one would think he would not stoop to that street vernacular himself. Is this what the world has come to? Xavier saying, “I’m fucking 90!”

When Logan is tasked to transport a scrappy little girl, Laura (Dafne Keen), to an apocryphal destination, the movie comes into focus. Government spooks led by a steel-armed merc named Pierce (Boyd Holbrook) are after Laura, and stumble upon a bonus: “As I live and breathe – the Wolverine!” (When Pierce says the name, a thrill flirts up our spines – just the mention of that name makes it all snikt powerfully into place!) Xavier is another prize quarry for Pierce, who explains that the government wants to register Xavier’s brain as a Weapon of Mass Destruction; and we kinda see the sense as Pierce explains how “dangerous a degenerative brain disease would be in the world’s most dangerous brain.”

Richard E. Grant is another government scientist. Unlike other X-Men movies, the government is no longer scared of muties and don’t want to kill ‘em all, or cure ’em for that matter – they want to weaponize them, which is why they pursue.

Exposition is a little clunky as Xavier and Logan watch hidden camera footage (edited as cogently as a ROCKY montage) and discover Laura is called X23, a mutant engineered with Logan’s own genes in a secret gubmint lab. Hence, retractable double-claws in her forearms – and foot claws for added sass. Other mutant children are seen escaping the lab. X23’s quest: to rendezvous with them at a mutant haven called Eden, described… in an X-Men comic! Worlds collide as Logan denounces X23’s X-Men comics, “Maybe a quarter of it happened – and not this way…”

Both Xavier and X23 consider Logan her “father,” but Logan is not so quick to agree: “Look, kid. I’m not who you think I am!” 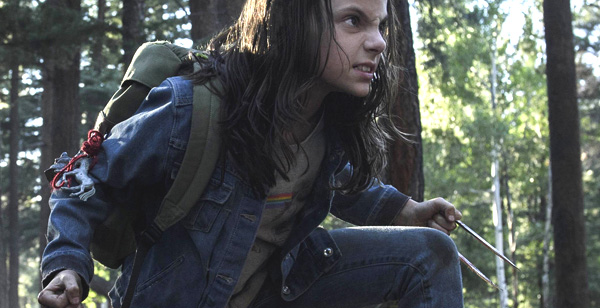 So cute she can disembowel you before you think about playing with her My Little Pony.

The gore is exceptional. A scene where Logan struggles against Xavier’s mental concussion waves, to kill a bunch of assailants in seeming “slow-motion.” His arm-katanas creamily injected through skulls and chests and bellies, flesh parting, blood gouting, illustrating how lethal those claws are. We have to imagine this is what was happening throughout Logan’s killing sprees – but off-camera. When he jumped off the balcony in X-MEN 2 and sliced into four assailants, they all died off-camera. Now we see the graphic consequences of having adamantium claws “that can slice through vanadium steel like butter” (whatever that means – Wolverine comics used to love that phrase).

And there is the inspirational fury of X23, that gives us a spark of hope that the legacy will live on. After all, in comics, X23 has already gone on to bear the code name Wolverine. And though Dafne Keen is only the age of Hit-Girl in KICK-ASS, her ferociousness stirs something feral in our loins [and is there any way I can say that WITHOUT sounding like a perve? I guess not…], with an acting maturity far beyond her pre-teen years. One can only speculate what the future holds for the Wolverine brand…

When a farmer’s horses escape a trailer on the highway, Xavier tells Logan to stop and help. Logan snarls, “Someone will come along.” Xavier: “Someone has come along.” He closes his eyes and psychically corrals the horses. Not only is this a poignant scene illustrating Xavier is not totally gone (he is kept medicated – in his words, “pharmaceutically castrated”), it is a lesson in behavior for this fractured, polarized society. Yes, you can walk past someone in need, knowing “someone else” will come to their aid – but you are here RIGHT NOW. Why not you? If not now, when? 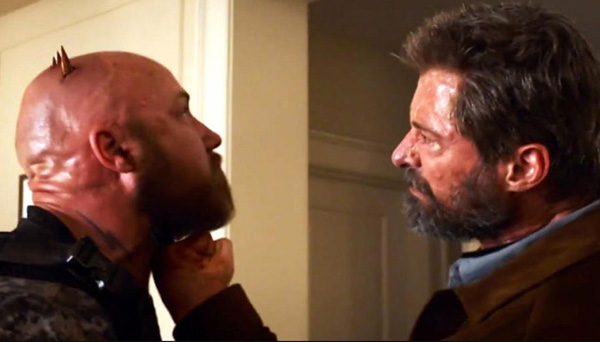 Stopping for the night at the farmer’s home (Eriq La Salle, Elise Neal and Quincy Fouse as the family), we experience a quiet respite from the bloodsport. Soothing. The polar opposite of adamantium murder and frenzied decapitation. And Xavier tells Logan, “This is what Life looks like. A family, people who love you. You should take a moment, feel it.” Logan brushes it off with a grunt.

Thus, Logan’s dying breath can be taken two ways: “This is what it feels like…”

Some think Logan is referring to dying, a condition he has been deprived of over centuries, yet if we hearken back to Xavier’s words, and add the final whimper of X23 as she holds him close, “Daddy…” we see the movie has come a long way to rend our hearts. We realize that the brusque Logan, guarded, lonely, selfish and wary (“Bad shit happens to people I care about”), in his last flickering moments, experienced Life as Xavier described – the elation of caring for someone else and having them care for you.

Probably only one moment of levity in this almost depressing saga: After delivering Laura to Eden, Logan lies unconscious… while the kids of Eden, to his chagrin, trim his beard into the half-beard/sideburns we know so well. It’s a laugh for them because they only know him from the comics – a legend, a wraith in yellow panties and Astro Boy hairstyle; and it’s a laugh for us – to at last recognize our berserker hero, wolfen ‘do and pumped in fury as he locomotives headlong into his final battle. 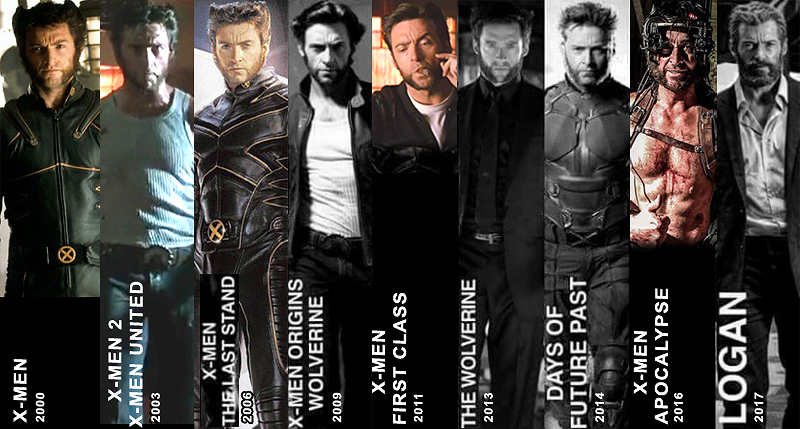 Wolverine, the Marvel superhero character created in 1974, will surely be back on the silver screen, in another incarnation in an alternate future, although I doubt anyone will inhabit the role as legitimately as Jackman. Seeing him bid goodbye to the character is as saddening as if the character is dying for good. For no matter the younger actors that will don the sideburns henceforth, no matter the swankier production values, the poutier muscles, the funkier hairdo, the grander adventures – this iteration of Wolverine is lost to us forever.

LOGAN is like a ménage a trois between SHANE, TRUE GRIT and UNFORGIVEN, but mostly TRUE GRIT (a hardened gunslinger protecting his young charge, no matter the cost), not SHANE (a hired gun helping landowners, with a young boy on the periphery of the story), even though Laura and Xavier watch the latter in a hotel room, Shane’s dialogue neatly summing up Logan’s regrets, “There’s no living with a killing. There’s no going back from one.” (In the final scene, Laura repeats Shane’s words verbatim, that he utters to the strange mannequin boy, about “running home to mother.”)

The theme of every killing taking its toll is presupposing you have a conscience. Though Logan has a conscience, Laura does not. She has been raised as a sociopath, so Shane’s words do not hold any resonance for her, even though the filmmakers (writers Scott Frank, Michael Green and James Mangold, also director) would like to believe they are emulating an old time classic.

Many were disappointed in Wolverine’s first solo outing, 2009’s overwrought X-MEN ORIGINS: WOLVERINE (directed by Gavin Hood), but the film was not bad – it just lacked the gravitas we expected from a character so damaged and dark; then James Mangold’s THE WOLVERINE (2013) was praised for “getting it right,” even though in retrospect, we realize that film only retained the character names from Wolverine’s first intensely psychological solo adventure and none of the gravitas. Now, Mangold sharpens his claws and actually does snikt it out of the park with LOGAN. Gravitas an’ all. 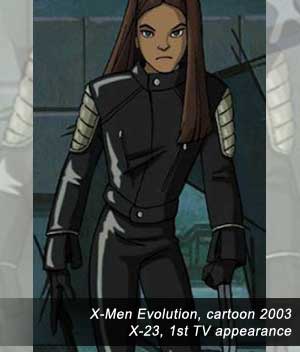 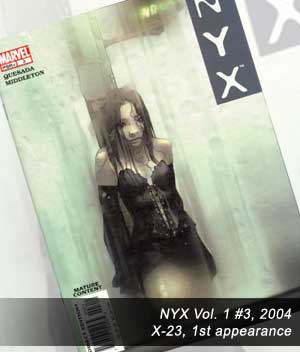 Iron Maiden ♦
Bring Your Daughter To The Slaughter