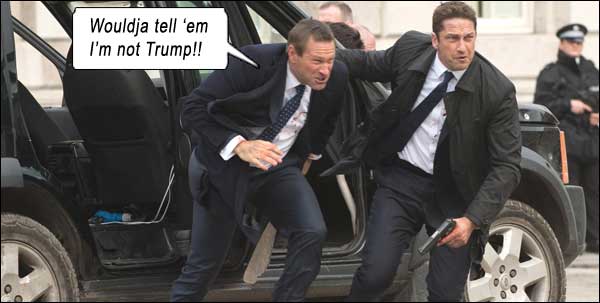 LONDON HAS FALLEN follows in the same vein as its predecessor, OLYMPUS HAS FALLEN – a gritty actioner that puts the American president in peril, so his bromantic bodyguard can save him.

The terrorists are winning again.

Movie opens on a Middle Eastern wedding party near Pakistan, which is blown sky-high by an American missile, taking the lives of over 200 people, 2 of whom are sinister-looking guys planning revenge killings. Scorecard: 2 potential criminals, 198 innocent civilians. Told you the terrorists were winning—oh, you took it for granted I meant Middle Eastern olive-skinned people when I said “terrorists,” and not the American military with drones, attacking from a base in Nevada and murdering in cold blood from afar like cowards? The mission officer even tells the guy flying the drone, “You’re clear to execute.” He uses the word “execute.” And gets away with it because – America…

The explosion cross-fades into an American flag – as if to rub our noses in it. (‘Watch us murder with impunity and then wrap ourselves in the stars and stripes to justify it!’) Title card tells us it is Two Years Later…

We meet American President Ben Asher (Aaron Eckhart) and his bodyguard Mike Banning (Gerard Butler) jogging; the youthful, sexy Pres once again amazed at the iron constitution of his chief protector running rings around him. Little does he know his taut-buttocked guardian is writing a Resignation Letter, expecting his first child (with wife Radha Mitchell).

But then – the British Prime Minister dies and every world leader must attend the funeral in London. Not knowing Banning intends to resign, Pres calls on him to make the trip. Banning accepts, telling his understanding wife, ‘One last time.’

With every world leader in London, the city is blown to hell, in a massive coordinated strike that leaves few leaders alive. One of my favorite newsmen, Lawrence O’Donnell, represents Generic American Newsguy: “the attack decimated most of the British landmarks. Five world leaders confirmed dead.” (I’m presuming Londoners would be a tad more impressed with this film than the rest of the world, seeing their landmarks blowing up in such realistic detail, as we Angelenos appreciated the novelty of L.A. landmarks torched by special effects in VOLCANO).

A Pakistani named Barkawi (Alon Aboutboul) takes the blame, the same guy whose daughter was blown up at the wedding earlier. So this is blowback for the American attack. Barkawi was one of the 2 sinister-looking guys – and he didn’t even die, which means the Americans blew up all those innocent people for nothing! (The innocent victims are later referred to as “collateral.” Who are the terrorists again?) And now the Americans seem surprised when arms dealer Barkawi comes after them righteously for blowing up his whole family! These “terrorists” and their vendettas! Why can’t they just let America blow them up without retaliating?! 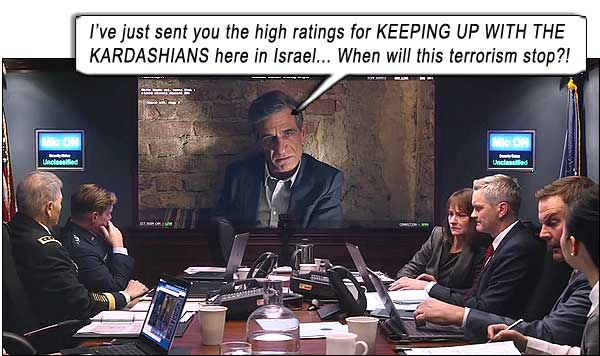 In the midst of the Pretty Orange Explosions and gun battles, President Asher and his boy Mike Banning, fight their way to the chah-pah! It’s all blam-fest from there on in, superguy Banning providing protection level services that only a man-of-steel could likely get away with.

All the main characters reprise their roles from OLYMPUS: Morgan Freeman is VP, Angela Bassett is Secret Service director; Robert Forster and Melissa Leo in the president’s cabinet, drawing on their reserves of Concerned Face No.7 around the White House conference table; Jackie Earle Haley joining them with Concerned Face No.9.  Colin Salmon is head of British security (the man who should be the black James Bond); and there’s cute and sexy Charlotte Riley as Jacquelin (Banning warns, “Don’t fuck with her!”), dealing with a mole in the British Secret Service, who helped coordinate the London strikes.

Co-written by the writers of OLYMPUS (Creighton Rothenberger and Katrin Benedickt, and directed by Babak Najafi (hey! He sounds like one o’ dem terrorists), LONDON HAS FALLEN is a brutal R-rated bullet-fest with premium swearing and savage, violent deaths. There is a scene where Banning shoves a knife slowly into Barkawi’s son, just so that man’s brother (listening on the walkie-talkie) can hear him scream and die. The president asks Banning, “Was that necessary?” Banning’s curt reply, “No.” It’s comedy gold—but wait! Shouldn’t the Pres be horrified, thinking, “Whoa my God! My bodyguard is a SADIST!”? But no. Funny. Because – American.

The Pres and Banning make it to the chah-pah, called Marine-1. In an amazing sequence (for more than one reason), the convoy of three helicopters runs out of flares to deflect the missiles coming at them from the ground. We hear on the com, “Marine-2, prepare to sacrifice.” Marine-2 says, “Copy”– wait—what?!— Marine-2 simply has to take it in the ass for Marine-1?! And we see Marine-2, without hesitation, fly into the path of the oncoming missile, without any lube. 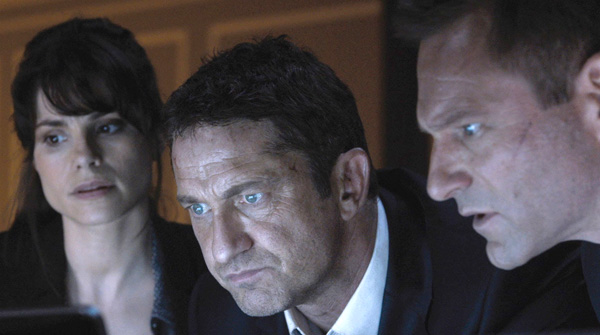 “Don’t worry, sir. That CNN interview with Kellyanne Conway
has already been logged under “cyberterror.”

Cliché Alert: The Pres and Banning drive through a hail of bullets and get clear, then start laughing, “We fucken made it!” Isn’t this ALWAYS the moment that the attack comes ‘pon the side? The Pres is nabbed by the villains, who plan to execute him live on the internet (which should trend for about 3 hours, and then be replaced by news of the Kardashians).

It’s amusing that Gerard Butler’s character name (Banning) is so close to the actual name of the white supremacist Hutt in the 2017 Dumbo Donald administration (Bannon). This movie makes us wish someone would kidnap Dumbo Donald and beat the shit out of him, as they do President Asher, although one might wonder what principles the villains would make Dumbo Donald renege on (as the pathological liar is devoid of principles or loyalty to any country or creed), or what national secrets they could beat out of him that he hasn’t divulged himself without any prompting? This is why Dumbo Donald – the president who has insulted every other world leader with his ignorance – has not been kidnapped yet. Firstly because everyone knows that no one would try to get him back, and secondly, because there is no ethos there, no system of belief that can be denigrated on the world stage. And really, how far would Dumbo’s Bannon go to rescue his senile, retarded Nazi boss? And we could bet no helicopter would throw itself in the path of an oncoming missile for that obese mongrel swine.

Cliché Alert: Humanizing the Americans – Pres cares for his son, Banning cares for his wife, Morgan Freeman wants to catch a big fish… How come we never hear how much Barkawi cared for his daughter? His emotion for her is relegated to revenge on London. They say he deals weapons to America’s enemies. But didn’t America sell arms to the Afghans, Iranians, Iraqis, Pakistanis, Palestinians, the Mujahideen, Al-Qaeda, the Taliban, Hezbollah, and ISIS? Oh, that must have been some other country named The United States of America.

Cliché Alert: Jacquelin discovers the mole betraying British Secret Service. Instead of alerting a whole squad to go pick him up, she confronts him alone in a parking garage. (Just because you’re sexy doesn’t make you smart.) With gun in hand, she then proceeds to tell him how she figured he was the mole. How about saving it for the trial, honey? Then she tells him softly to “Get on the floor.” We know he’s going to back away towards his car, where there is a gun waiting for him. We know she’s going to say it louder, “Get on the floor!” while he continues to back away with his hands up. And we know she’s going to scream “GET ON THE FUCKING FLOOR!” before he lunges for the gun and she is forced to shoot him dead. She could have wounded him, but no. So  when reporting the incident, how will anyone know she is in the right? Maybe she shot this man in cold blood and PLANTED all that evidence making him look like the mole? This scene is so stupid, it made Jacquelin even hotter. 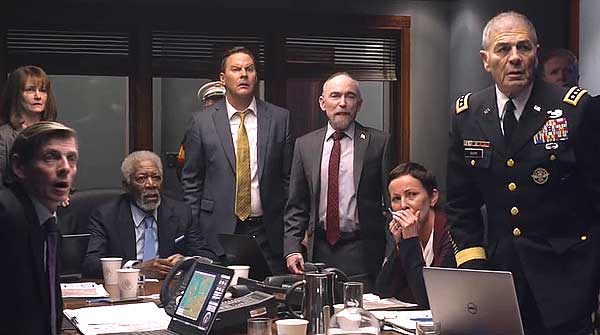 Being reminded of all the damage America has done to the world
always makes the cabinet recoil in horror.

Movie ends by blowing up Barkawi. And to pander to Social Justice Warriors, we clearly hear, “Ground asset confirms: clear of civilian presences.” Yeh, royt. So this makes up for murdering those innocent 195? Because you CHECKED this time for “collateral”? I guess we owe America an apology.

If you love action movies, LONDON HAS FALLEN is a good proponent. It’s well-acted, and may squeeze a poignant tear in small sequences. The set-up scenes in the first act are very compelling for their detail, editing and direction. And production values are exceptional: there is a firefight where our heroes are running towards their objective at the end of a street, while being fired upon from that point, and we can see fiery streaks of heavy duty rounds coming at us from a vanishing point. We see the flares of the firing, hot bullet trails in the air, impact points, meticulous sound design; the blocking and cinematography in this scene alone is stunning. It separates LONDON from its copycats.

It’s a highly predictable film of course, because no American president is killed in an American movie (unless it’s Lincoln or Kennedy). Especially by so-called “terrorists.” Terrorists have to lose in this current fearful political climate. It’s not so much fantasy as wish-fulfillment.

But the funniest thing is, even though movies portray terrorists as being from Anywhere But America, America has proven itself the greatest terrorist threat to the world, especially with a madman at the helm (Dumbo Donald): not even counting the innumerable American gunmen who terrorize schools and malls, America “boasts” the largest nuclear armory in the world, disallows other countries to amass nuclear weapons, uses the threat of WMDs to keep other countries cowed; has military bases around the world holding the boot on other countries’ necks, owes debt to other countries with no intent to pay it back, with the threat of sanctions, embargoes and loss of support, should those countries pipsqueak their dissatisfaction.

And though all other countries still try to outwit America the old-fashioned way – with bombs and guns and man-agents dressed as women – Russia eventually got it right, installing a dimwit sociopath wannabe dictator in the White House in 2016 to do their bidding (much like America installed the Shah of Iran in 1953), and this Dumbo Donald is systematically dismantling the tenets of democracy one freedom fry at a time.

The terrorists have won.