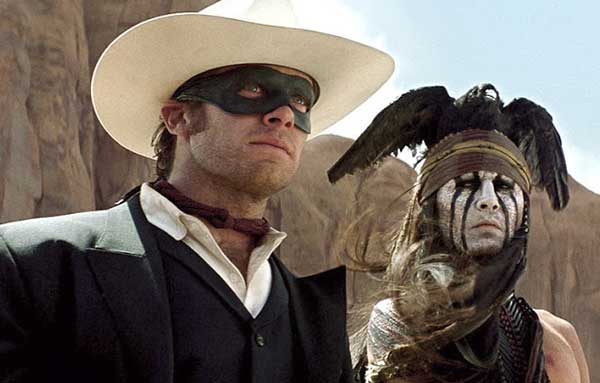 “I say, Tonto, another fine day to be righteous and white, eh?”

The Lone Ranger (in radio, television and film) has made Gioachino Rossini’s galloping theme so famous that the term “intellectual” has been defined as “a man who can listen to the William Tell Overture without thinking of the Lone Ranger.”
— Wikipedia.

No one’s a stranger to the Ranger. Popular in entertainment media since the 1930s, if you are alive right now, you were exposed to The Lone Ranger at some point in your life.

The story of the masked Texas Ranger who seeks Justice with his Native American sidekick has always been a pretty simplistic endeavor, which probably explains the Lone Ranger’s popularity. I remember the cartoon best. Straightforward. Baddies were one-dimensionally bad and good guys were just as one-dimensionally good. As far as I can remember, The Lone Ranger was never shadowed by the darkness of vigilantism or moral ambiguity. Even the irony of him operating outside the Law to bring Justice is lost on his demo.

THE LONE RANGER 2013 retains this same simplistic notion of bad and good, with a little origin story thrown in, cartoonish action pieces, and a lot of people holding a gun on someone else and talking instead of shooting.

The team that brought us the PIRATES OF THE CARIBBEAN create this kids’ adventure tale (writers Ted Elliott and Terry Rossio, and director Gore Verbinski); thus, a kid is the voice of the audience. The tale is told in flashback, after a young boy (Mason Cook) at a 1939 San Francisco fair, dressed in Lone Ranger duds, visits the Wild West exhibit and encounters an ancient Tonto (Johnny Depp) as one of the exhibits. Tonto spins a tale of what really happened 60 years ago, deconstructing the Lone Ranger legend. So the movie proper (set in 1869) is interrupted jarringly at intervals by these scenes of the boy and old Tonto, the boy voicing some plot hiccup or mythology we’d all like to point out at that juncture.

It’s like the movie is being too self-effacing; playing devil’s advocate with itself too harshly; like it’s attributing outlandish plot elements to the ravings of a senile Injun. And that old adage “If you don’t like yourself, how can anyone else like you?” works against the filmmakers, because these segments prove they do not have faith in their own product; that it needs some kind of self-conscious apologia. They seem to scoff at the childishness of the Western format and the unblemished integrity of the lead character.

Armie Hammer is the new chiseled face of the Ranger aka John Reid, a lawyer who returns from the big city to bring law to the frontier via the gavel, not the gun. Riding with his Sheriff brother (James Badge Dale), their posse is ambushed by the Butch Cavendish gang (William Fichtner). The whole posse is killed, with Reid left for dead. Tonto, also on the trail of Cavendish (believing he is a Wendigo spirit, throwing nature out of balance), finds the wounded Reid and, at the prompting of a mythic white horse, nurses Reid back to health.

Tonto urges Reid to wear a mask whilst seeking his “killers,” the rationale being: they think him dead, “better to stay that way.” Which spurs the running gag, “What’s with the mask?” A very modern phrasing that rankles on the “legend” aspect.

Tom Wilkinson is the railroad baron, laying track through hostile Comanche territory. (Wasn’t he the railroad baron laying track through hostile territory in THE GHOST AND THE DARKNESS?) Ruth Wilson is the Michelle Monaghan lookalike whom Wilkinson threatens with rape and whom Reid crushes on – it’s Disney, so any chance that we’ll see rape or sex is dashed before it ever progresses to hand-holding. Helena Bonham Carter (veteran of starring alongside Depp) is a whore. And here, she plays a whore. Barry Pepper is a cavalryman with a mungabush to rival Custer’s. And Stephen Root is a councilman with a mungabush that puts Pepper’s to shame.

Saginaw Grant, legendary Native American elder, states the most profound truth, when told that attacking the white man will cause war and ultimately the death of his people: “We are already ghosts to them…”

THE LONE RANGER is best appreciated by younger folk not picky about the cartoonish nature of its bombastic action, where people escape explosions right next to them, and walk away without a bruise from massive falls that would kill a lesser Wile E. Coyote. Some of the stunts and gags are original, and the soundtrack will eventually cascade into the majestic gallop of the William Tell Overture during the final audacious chase scene. But this finale, atop two trains on two different tracks, rolling alongside each other along cliff faces, is especially made for that young audience, as I lost count of how many times I wanted to punch the movie, with its coupling and decoupling of carriages, crashes and explosions and splinterings, shooting across moving carriages, jumping on and off train roofs and generally doing all those things that only Bugs Bunny and the Roadrunner can get away with. 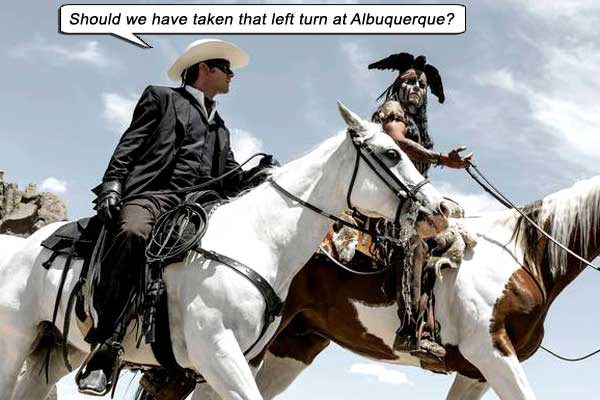 This Western can’t quite figure if it wants to be a comedy with high action or a statement about villainy told comically. While it’s trying to decide, it keeps losing favor in many ways:

No one’s a stranger to the Ranger. But this Ranger is a stranger to us. THE LONE RANGER deconstructs the legend so thoroughly that the Ranger comes off looking like an “unwitting” hero, not the instigator of justice. Tonto is clearly the brains behind the outfit, while the Ranger is led by the aquiline nose like a righteous, vapid blonde. (Hammer played this role once before (in MIRROR MIRROR); if he’s not careful, he’s going to end up Brendan Fraser.) This rejiggering of the partnership’s power structure was not to deconstruct legend, but because it just looks screwy in this age of pc tolerance – for a red man to devote himself so unquestioningly to a white man like a – ahem – slave… In the early 1900’s, there was no question that the “noble savage” would aid the righteous white man as he trampled the beloved frontier into “civilization,” but now, that inherent subservience doesn’t wash. Hence, Tonto is boss, and on his own mission.

And even THIS doesn’t quite wash. Because the underlying reason Depp is cast as Tonto is because they couldn’t realistically cast a Native American who would be lording over an actual white man. No audience would stand for it! That’s how deep the racism river runs! They HAD to cast a white man in the role of red man because he was written to be the leader of the duo. And we can’t have an ACTUAL red man as boss now, can we, racist America?

The one time the Ranger rears up on his horse with that famous cry, “Hi-Yo, Silver!” a startled Tonto berates him, “Don’t ever do that again!” With the film’s rancid critical reception, it’s a safe bet he won’t…

1920, 1927: IMDb lists two shorts called THE LONE RANGER during these years, but I cannot verify if they are the same popular character we know.

1933: radio show on WXYZ Detroit. The first verifiable appearance of the masked avenger on the white horse fighting crime in the Old West, with his Native American sidekick, Tonto.

1936: novel, The Lone Ranger (by Gaylord DuBois). More than 18 more Lone Ranger novels would appear until 1956, all written by Fran Striker. 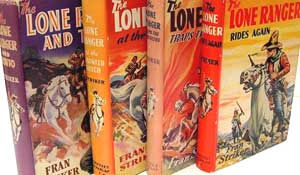 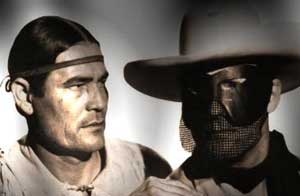 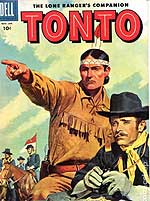 1949-1957: TV series, THE LONE RANGER, starring Clayton Moore and Jay Silverheels (and others).

1981: movie, THE LEGEND OF THE LONE RANGER, starring Klinton Spilsbury and Michael Horse. 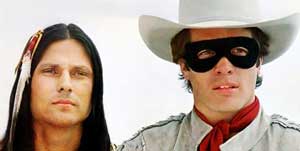 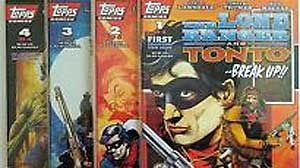