Grabbing Deutschland by the Muschi.

What if Hitler came back in the YouTube age?

With modern media at his fingertips, how might Adolf Hitler’s nationalist-socialist message be received? And with most media-drenched dunderheads trigger-ready to follow demagogues, would history repeat itself on a much quicker, more efficient scale? Conversely, if such a charismatic person ever appeared on our clickbait stages, COULD we be firewalled from such a magnetic personality; one that drives views and dictates public discourse, and therefore sells advertising? These are the questions posed by author Timur Vermes in his 2012 novel, Er Ist Wieder Da, and brought to the screen by director/co-writer David Wnendt.

LOOK WHO’S BACK is a fish-out-of-water comedy. At first. Then it gets dark, as the last few scenes presciently showcase the rise of the demagogue, and the prosaic state of political discourse in our terrifying modern reality.

To be clear, note the date on Timur’s satirical novel – 2012 – and the production date on this German film – 2015. Both are prior to Dumbo Donald bestriding world politics like a Colossus of Imbecilia. They were not created in reaction to Dumbo Donald (even though it seems that way in retrospect). LOOK WHO’S BACK thus becomes a scathing portent of how ignorance and stupidity can unravel a nation when a person with overbearing charisma appears to the Low Information Sheep who need a leader to guide them.

Adolf Hitler (Oliver Masucci) wakes up in a Berlin park in 2014. Simply appears in a puff of smoke. In full uniform, disoriented, bewildered, his overcoat torn and slightly burnt, he wanders the streets, into the tourist-clogged Brandenburg Gate, thinking everybody has gone completely mad. People laugh and consider him an Adolph impersonator. By sheer coincidence, the paper he picks up to verify the date – shows Vladimir Putin on the front page!

Hitler finds shelter at a newspaper stall with a kind clerk (Lars Rudolph, the William H. Macy of Germany), who introduces him to his nerdy friend Sawatski (Fabian Busch). After hearing the authenticity of Hitler’s rant about conquering Poland, Sawatzki, a down-on-his-luck video journalist, thinking Hitler is a method actor, hits upon the idea to produce a TV segment, whereupon he drives Hitler across Germany, filming him speaking to the common people about the problems of voting, democracy, invasive immigration, with Hitler assuring all his growing crowds, “I will fix it!” Hitler basically finds the Deep South in Deutschland. (Amazing how this all sounds so similar to the wannabe tinpot dictator who ravaged America’s heartland in 2016.) 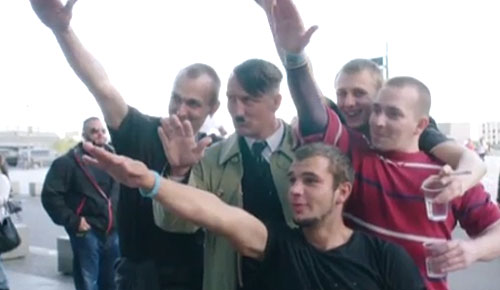 These Dumbo Donald supporters are everywhere!

Sawatzki frames it as Hitler “marching through modern Germany” – and Hitler takes it seriously, finding “a silent anger and political disenchantment that felt like 1930.” He prefers the Green Party “because they protect nature and the country.” (To Hitler’s jingoistic ears, the “country” leaning was paramount.) And he was outraged that television – “such a great propaganda device” – was nothing but nonsense: “Goebbels would be turning in his grave!”

Driving in the car together, Hitler asks: “What is this noise?”
Sawatzki: “Hip hop.”
Hitler, listening to the lyrics, asks: “Nigger, nigger?”
Sawatzki assures Hitler it is praise.
Hitler: “Praise? It’s a swear word! Every child knows that!”

This sets up one of the many guffaw moments when, at a white supremacist gathering, Hitler blurts in ecstasy, “You’re my niggers!” to the dismay of the crowd.

A cute Satanist chick (Franziska Wulf) shows Hitler the internet, and gives him a screen name (to Hitler’s chagrin, adolph.hitler was already taken); he recruits troops on facebook, he winds up on a Vegan Neo-Nazi internet cooking show; ultimately, he ends up on a popular show called WHOA DUDE! with the German Rowan Atkinson (Michael Kessler). It is here the film takes its dark turn.

Hitler stands before the studio crowd, drenched in charisma and power; a combination of Peter Finch in NETWORK and Mel Gibson in BRAVEHEART. He lets the silence simmer, his inner voice describing the tactics of letting the crowd stew, trying to reconcile his reality with the media images fed to them over the years. And he speaks. And everyone finds themselves agreeing with him. He makes sense.

He gesticulates, and it’s eerie how Masucci has the moves down! At first, we might’ve thought Masucci a tad built, a mite tall, to play what we have come to believe was a sallow, sickly creature, but now we see how perfect he is for the role of the larger-than-life Fuhrer. Masucci’s performance never falters from that of the egotistical force of nature, and his expansive frame begins to represent Hitler’s enormous “presence” in any room, any gathering, any exchange of insane ideas.

Stellar plotting weaves in peripheral characters, like Sensenbrink (Christoph Maria), a bullied TV executive, who in turn bullies his underlings, including Sawatzki. We reach a point of insane parody when Sensenbrink, exactly in the manner of the Hitler character in the movie DOWNFALL (2004, aka DER UNTERGANG), furiously cusses out his staff, spittle flying, while others hear the fury from outside the room, some in tears… 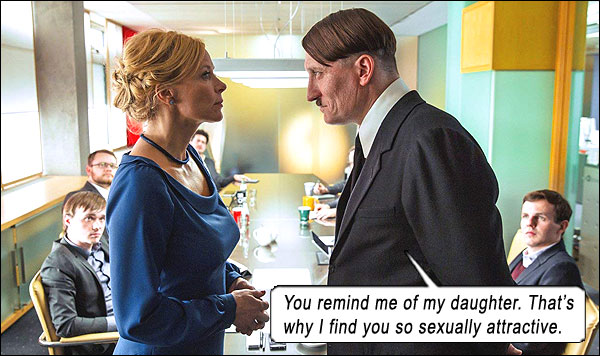 The network managing director (Katja Riemann) would be taken by Hitler’s speeches on her air; a 40-ish busty blond with ice-blue eyes and chilling ferocity, in a final shot, as she sits next to Hitler in an open car, we realize she is his Eva Braun.

Hitler’s words should send a chill down the spines of all those encumbered with the Russian-puppet wannabe-fuhrer of modern times: “In 1933, people were not fooled by propaganda. They elected a leader who openly disclosed his plans in great clarity. The Germans elected me.” (Like the Americans openly elected a pussy grabber who promised to be a white supremacist.) “If I am a monster, then you have to condemn the people who elected the monster. Have you never asked why people elected me? Because at their core – they are just like me!” (And the unsheeted Klanfolk who call themselves Dumbo Donald supporters rejoice in ignorant abandon.)

The surprising ending should horrify anyone who remotely believes in the greater good of humanity. LOOK WHO’S BACK tells us Evil will win, if – as in America 2016 – all the conditions are reich.