Trust me, Gentle Viewer, if you’ve not seen the first two installments of this bloated, beguiling masterpiece, or if you’ve not read the rambling, roiling Lord Of The Rings book (often regarded as a trilogy), do not watch THE RETURN OF THE KING. It will only necessitate calling the Dial-A-Geek Hotline to elicit logical explanations as to how a supernatural being could manifest itself as an all-seeing Eye and then have the Abbot&Costello mentality to only monitor the spots where this Eye is actually “looking”; and why Gandalf, who rescued Frodo from Mount Doom at movie’s end with the aid of deus ex machina giant eagles, could not have done the same three hours ago and flown Frodo to Mount Doom in the first place; and why Viggo looks so masculine in RETURN OF THE KING and so gay in HIDALGO.Us outsiders to the Dungeons & Dragons phenomenon will never know…

If taken as a movie unto itself, it is merely noteworthy, though disjointed. But this movie should be regarded as the last three hours of a grand tale so epic and awe-inspiring that it needed nine hours to faithfully tell it. (Even so, we get the superfreaks complaining that it was too short!). 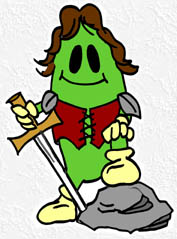 Of the eight endings in the film, there was one in which Aragorn actually found some soap. There was also another ending in which Jackson let slide the fact that we could clearly distinguish (in rear views) the child-actors in place of Hobbits; thrown in somewhere was a happy ending, a sad ending, a token African-American ending and one which involved everyone jumping on Frodo’s bed in slow motion like a lingerie ad.I must admit to shedding a lonely tear whenever I think of how massive the delight of J.R.R. Tolkein might have been had he the opportunity to see his masterpiece transformed into such a – well, a masterpiece. Director Peter Jackson is a genius – there’s no doubt about that. And these RINGS films are unparalleled in cinematic history. Words fail. The wealth of creative staff employed by Jackson brought a depth to the visualization of Tolkein’s wonders that Tolkein himself would never have had the capacity to envision – case in point: those elephantine war-chariots. Take a close look at their armaments and battle-ornamentation and then imagine a lad from 1950’s British society seeing this on screen – to him, this “reality” would be literally as magical as the tale he was telling.

Nonetheless, I find I am constantly torn between piling praise on Jackson’s herculean movie-making task and nitpicking plot holes in the storyline, which is no fault of Jackson’s, and which, if Jackson is to remain faithful to the book, must necessarily be integral to the film’s storyline.

For example, if all elves are immortal, shouldn’t they all attain a certain age and then stop aging? Ultimately, your father should end up looking exactly like your brother – and fathers and daughters would look like brothers and sisters – correct? Yet why does Elrond look like Liv Tyler’s drunken, old, cross-dressing uncle? And why should they all go sailing off somewhere into the sunset in order to be immortal? Immortal is immortal, no matter where you spend your days cross-dressing.

In TWO TOWERS, why is Theoden’s Kingdom located so far from their stronghold, Helm’s Deep? In order to retreat to this supposedly strategic bastion, one must put the lives of the whole kingdom at stake by taking women and children over unprotected miles of open ground – good strategy! Wouldn’t it make better sense to simply make your kingdom’s residence at Helm’s Deep?

And those Dead Souls from the Mountain – did they really have to take a boat to the battle at Pelennor Fields?

And I simply cannot stomach predestination in any form; too much prophesying and foretelling and precognition and idiot phrases like, “What does your heart tell you?” If Elrond foresaw Frodo’s demise in delivering the Ring to Mount Thunder (Galadriel tells him this via some kind of mind-meld in TWO TOWERS) – well, why go at all? Oh, that’s right: because we have the power to change our destiny – well then, all your prophesying and soothsaying is HEARSAY anyway!

Whenever Theoden shouts orders amidst a battle, or when Saruman speaks to 10,000 slavering orcs, I’m reminded of MONTY PYTHON’S LIFE OF BRIAN, where Jesus speaks to the multitudes and those in the back are yelling, “Speak Up!” and “He said, ‘Blessed are the cheesemakers!'”

The biggest question of all, surrounding this whole shebang, is, of course, if a supernatural entity has the wherewithal to forge a talisman of illimitable power – The One Ring, that which all the poking and puking is over – upon losing it (which would seem almost impossible in the first place, for a being who can “sense” The Ring’s presence) – well, why not simply forge another? End of story.

Poor Frodo and Viggo and Don Gandalfino, when all they had to do was tell the Big Dark Guy to make another ring and leave us be; instead spending three years putting on the sour pusses and being covered in poo.

Anyone got the Dial-A-Geek hotline number?