Gandalf is SUCH a badass!

Wizard against Balrog in a film opening so power-hammering it is astonishing that writer-director Peter Jackson didn’t score a cross-promotion rollercoaster ride at Universal Studios called The Falling Balrog. 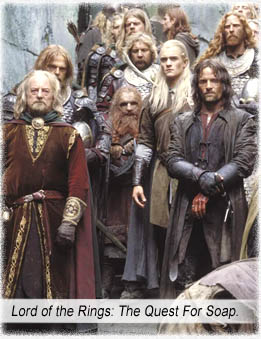 THE LORD OF THE RINGS: THE TWO TOWERS opens at the middle of the last film, THE FELLOWSHIP OF THE RING (2001), as our friends (hobbits, men, elf, dwarf and lots of poo) flee through subterranean caverns, pursued by a towering flaming demon that only Gandalf (Ian McKellen) has the ‘nads to face down. When he thunders at the advancing Balrog, “YOU – SHALL – NOT – PASS!” and thwacks his staff upon the stone floor (in a sound which any comics fan should know is written as “KRA-KHOOM!”) it is every superhero personified and every man-fantasy of impressing chicks combined.

Then they both fall.

There is that “falling” metaphor passim in Tolkien’s writing. (Only to rise again – the Superman trope, which is Nietzsche’s Ubermensch, formerly Christ’s resurrection, which in turn was plagiarized from every life-death-rebirth deity that came before, from Asia to Akkadia.) Later, Aragorn is swept off a cliff by a wolf, and dwarf Gimli (John Rhys-Davies) reports to Eowyn, in a poignant moment that is moving as much for Rhys-Davies’s throat-catching performance as for his words, “He fell.”

When Gandalf is resurrected as Gandalf The White and thwarts the surprise attack of Aragorn, Gimli and Legolas – what a badass! – Aragorn, dismayed, says to him, “But you fell…”

Even the ultimate fall of Gollum into the lava in THE RETURN OF THE KING, though it means the death of that poor conflicted special effect and the destruction of the One Ring, signifies a “rebirth” of Middle-earth.

TWO TOWERS is where “that gangrel creature” Gollum (motion-captured performance by Andy Serkis) comes into his own, in a mind-blowing, pioneering special effects coup for WETA Digital, Peter Jackson’s efx company. Like an evil Gandhi on crack, Gollum allies with the two star hobbits, Frodo and Sam (Elijah Wood and Sean Astin) on their quest to Mordor; they go to destroy The One Ring, Gollum goes for any opportunity to reclaim the Ring, his “precious.” Thus opening a new era in effects creatures interacting with humans onscreen. The sightlines between Gollum and the hobbits never falter, and when they engage in physical contact, their interaction is so “real” we never doubt it, watching the movie completely entranced by its story rather than marveling at Gollum’s “reality” or how his scanty panty never falls off. 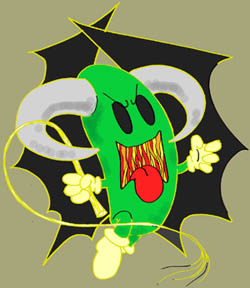 In THE TWO TOWERS, all our friends from the previous film wend their separate adventures in a dynamic, kinetic story full of middles. Being that TOWERS is – ahem – Middle-earth’s middle film (the red-headed child of Peter Jackson’s nonpareil RINGS trilogy), it very sensibly has a middle, more middle, lots of other middle, a legendary medieval battle that will stamp itself into filmic history, and more middle.Frodo and Sam find Mordor with Gollum’s help, decide to backtrack and find it again from the other side; the fruity B-hobbits, Merry and Pippin (Dominic Monaghan and Billy Boyd) stop being carried around by orcs and get carried around by a tree; the Nazgul have graduated to riding excellent bat-winged dragons with VOOMP-VOOMP! wingbeats; sexy Aragorn (Viggo Mortensen), his blonde elfin babe, Legolas (Orlando Bloom) and their husky child Gimli, run around the countryside, presumably in search of a good hot shower; while the mighty Gandalf slays a Balrog, drives the spirit of Saruman (Christopher Lee as Edgar Winter) out of Theoden King, and leads a cavalry charge on the Uruk-hai at Helm’s Deep – what a badass!

So many characters, so many strands of plot, yet Jackson holds it all together with an iron grip that never flags – from its broad battle strokes to its poignant personal relationships. Theoden King (regal Bernard Hill) wells the tears in our eyes when he weeps over his dead son, “No parent should have to bury their child”; Faramir (David Wenham) laments Boromir, “He was my brother” (even looking like Jesus – and, ironically, probably scoring more chicks for it – doesn’t help); such a cute touch that Legolas and Gimli count their battle-slain in overt jovial contest. And for the girlies, Jackson focuses maybe a little too much on Aragorn pining over his elf-boo Arwen (Liv Tyler, with pointy ears that just scream “Do me Elf-Style!”); add Arwen pining over Aragorn in slomo and whole chariots of tiresome love butter clog this film’s arteries. (And it’s hard to sympathize with Aragorn missing his pointy-eared woman, when Eowyn (svelte Miranda Otto, a shieldmaiden of Rohan) is bursting all over him like a romantic raincloud.)

Left for dead, when Aragorn arrives solo at Helm’s Deep, a grand, sweeping 360-degree pan frames him, in a scene befitting a resurrection, and necessitating the invention of big screen plasma TVs.

We wish we could comfort Eowyn more than the two-dimensionality of the silver screen would allow when Aragorn makes his grand, poo-covered entrance at Helm’s Deep: We see Eowyn, tears edging her eyes, dying to rush into his arms, suddenly halted by the sight of Legolas returning Arwen’s amulet to Aragorn (in imperceptible slomo, cos it’s romantic, see); played beautifully by Jackson, like he has hours to spend on relationships alone, when he will soon cream our bellbottoms and skull-rape our eye-sockets with…

The Battle of Helm’s Deep.

There is only one way to describe this battle scene which somehow does not lose us in its madness, conveying clearly the pitch and yaw of victories and defeats, focusing on every character involved yet encompassing the grand scope of the madding war tableau… actually, there is NO way to describe it. Just watch it. I don’t know how he did it, but Jackson keeps us hanging in suspense and excitement during every minute of what most other filmmakers usually turn into generic rumbling. A truly incredible feat of direction, editing, choreography and creativity.

I wonder what a Tolkien scholar would think of THE LORD OF THE RINGS?

In staying true to Tolkien, Jackson seems like HE is not thinking strategically, but plot deficiencies are Tolkien’s, not Jackson’s: why would Theoden King send his people cross-country to hole up in a mountain fortress with no exit strategy? Jackson rewrites certain plot points for drama, but cannot escape broad strokes: so 10,000 orcs are sent to decimate 300 people? If Saruman just ignored this veritable “village” he could still rule Middle-earth pretty much without any resistance.

At the end, while a montage of battles cascades before our wondrous orbs, Samwise Gamgee gives one of those speeches that makes your flesh crawl, “…that there’s some good in this world, and it’s worth fighting for” (uh, isn’t that an oxymoron?), whereupon the hobbits share a moment so romantic we feel we shouldn’t be watching them.

And just like the movie, I’m going to end in the middle of–