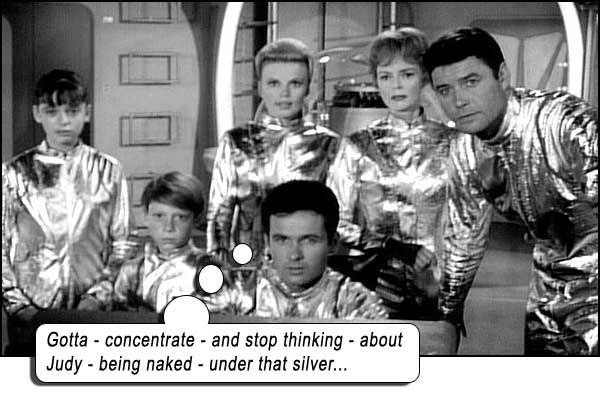 LOST tries to find its way…

“No Place To Hide” is the unaired pilot (Episode 00) of the 1965 TV series LOST IN SPACE, where the Robinson family, on their pioneering quest to Alpha Centauri, is thrown off course and into deep space adventures.

The Robinsons crash-land on a planet, battle a giant Cyclops and get caught in a maelstrom; not exactly pioneering storyline, but nonetheless moderately exciting that it is all happening on another planet…

LOST IN SPACE is arguably the first TV show of its kind. There were kiddie space series in the 50s, like SPACE PATROL and SPACE COMMAND, but LOST IN SPACE is the first space series allocated a considerable budget (over $130,000 per episode in Season 1) and taken “seriously” by the studios, as a vehicle that would attract adults as well as kids. Creator-writer-director Irwin Allen attempts to show us how serious by front-loading a Narrator with dialogue detailing every little tech gadget on the Robinson’s spacecraft while it awaits liftoff, and introducing each of the Robinson family members by revealing their qualifications as they board the craft.

This is something that is neglected in the actual Episode 01 (“The Reluctant Stowaway”), where it seems like your average American family is just playing at being astronauts. Here, the Narrator (Dick Tufeld, who would become the voice of the Robot when the series went to air) painstakingly outlines each resume: Dr. John Robinson (Guy Williams), Professor of Astrophysics; his wife Dr. Maureen Robinson (June Lockhart), biochemist; Will (Billy Mumy), their 9-year-old son, a graduate of a science school; Judy (Marta Kristen) is in the arts, and Penny (Angela Cartwright) has a startlingly high IQ. The pilot of the ship, Major Don West (Mark Goddard), is a graduate of radio astronomy and made the Kessel Run in less than twelve parsecs. Or something just as specious…

Of course, the jargon-filled introduction to the characters and tech is to qualify the show itself, i.e. to pummel the viewer with so much garble, we’ll get confused into thinking the show is more sophisticated than it really is.

Everything is same-yet-different in this Episode 00:

After 3 years, the Gemini crashes on an unidentified planet – but in that short a time, they would have been hard pressed even getting past the real Jupiter (a 6-year journey!) That is: they can’t possibly be that “lost.”

After getting the nod to produce the series, creator-writer-director Irwin Allen and co-writer Shimon Wincelberg did a very smart rewrite, adding Dr. Smith and the Robot, to jolt the drama into high stakes. Rather than the environment of deep space or inhospitable planets being the enemy (which was an amorphous concept at best), Dr. Smith was a tangible villain within the fold of the family; and the Robot was a tangible metaphor for the futuristic technology that the Robinsons would have to conquer in order to move forward into their uncertain future. Both these elements made the actual first aired LOST IN SPACE episode tension-filled and compelling! Fruit was at least 8 episodes away. 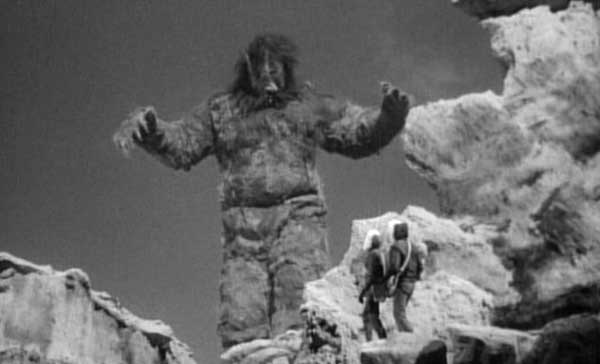 Don and Judy (the pointiest bra of the group) have a “thing,” innocent though it is for 50’s network television: Penny narcs that “Don was kissing Judy’s hand!” And the Robinson parents share a couple of half-passion mouth kisses. There is an unspoken premise that the Robinsons would ultimately populate the new planet orbiting Alpha Centauri, but there seems to be very little to work with, with just one family and one single guy… (Would Don have to impregnate both Judy and Penny, and would Will and John Robinson have to take over from there with those kids? The mind boggles…)

Professor Robinson is seen occasionally writing in a diary (wait – he’s writing in an age of space travel?! Not dictating digitally, or typing into a computer?!), his voiceover narrating the journal’s banal entries: “domesticating the local animals” (wait – there are myriad life forms on this planet they landed on, including thousands of species of plants, and this doesn’t excite their scientific curiosity in the least? He writes as if they’ve crossed an Earth ocean to a village in Papua New Guinea).

There is a chimp dubbed Debbie, cross-dressed to look alien, that is playmate to Penny (no quarantine issues or alien diseases running rampant, in either the humans or the chimp), and there is breathable air. If LOST IN SPACE taught us anything about our galaxy, it’s that ALL PLANETS HAVE BREATHABLE AIR FOR HUMANS. At least in this first episode, unlike every single episode after it, they did an analysis of the atmosphere before walking out with no helmets.

Robinson writes they’ve been trapped on the planet 6 months. There doesn’t seem to be any tension at all – until Robinson and Don find a giant footprint, and run into a Cyclops (a guy dressed in what looks like homeless rags, and made to look gigantic with a process shot), who corners them, while the stock source music ramps the tension to almost-zero.

Back at the ship, Will uses some kind of magic scope to view his father’s predicament, and while the girls all flutter and lament, “There’s nothing we can do,” Will – the 9-year-old BOY (i.e. the male) – grabs a “laser gun” and runs to the rescue. It must also be noted that while Will was doing something “scientific” (searching for his father with a scope), the women were all relegated to what were considered womanly duties: Unbelievable that the filmmakers couldn’t think of anything for Maureen to do other than wield a LAUNDRY BASKET and load a washer, while the two girls are GARDENING!

After the Cyclops incident, the family loads up their CHARIOT to travel south, to escape dire weather conditions. Yes, the Chariot – that cool, tank-tread, windowed excursion vehicle that was all-terrain and seaworthy! Technology! There was also the one-man Jet-Pack (used only minimally during the series) that Robinson would don to look for the lost Penny – in closeups, he’s in front of a rear projection screen, but in long shots, that’s really a guy flying (on a cable obviously, but very well disguised). Much time is taken up lovingly showing off their “special effects” – driving past the dead giant, the jetpack flying, the Chariot in the sea, etc. 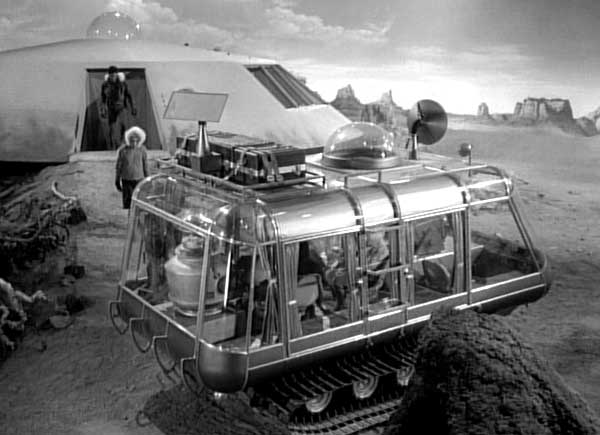 This episode’s plot line would be incorporated into two episodes in Season 1, Episode 04 “There Were Giants In The Earth” and Episode 05 “The Hungry Sea,” with some of the exact footage used from this pilot (why let it go to waste, eh?), complete with that cool new theme music for the tension and action sequences, composed by a young lad credited as Johnny Williams (who would go on to become the 20th century’s most recognizable movie composer – yes, that John Williams – CLOSE ENCOUNTERS, JAWS, SUPERMAN, JURASSIC PARK).

In a final scene, after escaping a maelstrom in their nifty Chariot, the family kneels on solid ground to pray—what the–? – over the last voiceover about “more adventures ahead…” while from behind some bushes, two aliens gaze at the Robinsons for a cliffhanger that would never be resolved.

Bring on the fruit!