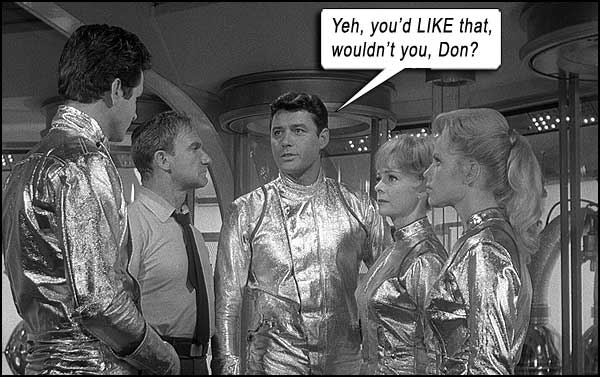 The Space Family Robinson, on a pioneering flight to Alpha Centauri, is swerved off course by an evil gay doctor and a bubble-headed booby.

This first LOST IN SPACE episode (“The Reluctant Stowaway”) is a grim science fiction adventure tale, set in the bleak “future” of 1997, where a silver-suited Professor John Robinson leads his silver-suited family onto the iconic flying saucer, the Jupiter 2 spacecraft, to seek out habitable planets in the Alpha Centauri system, so that humanity can migrate off this “critically-crowded planet.”

A narrator takes it all too seriously (uncredited Dick Tufeld, also the voice of the Robot), describing “man’s colonization of space beyond the stars.” While describing the technological marvels the Jupiter boasts, Narrator suddenly swerves onto a tangent about “other countries that would go to any lengths to sabotage the mission” —

As kids, we never saw the LOST IN SPACE catalogue in order; we watched constant re-runs of the 2nd and 3rd Seasons mostly. So Dr. Smith, the fey, cowardly comic relief, was already known to us as a swishy, dubiously-hetero presence onboard the Jupiter, laden with pithy insults and sideways glances. How shocked we were then, to discover this first ever episode, where Smith is a decidedly malign presence, a wily and intelligent spy, who can take down a soldier with one Spock-chop! We watch in dismay as our lily-livered, avuncular malingerer displays skills we never knew he possessed, re-programming the “Environmental Control Robot” to destroy the tech wonders the Narrator was just so lovingly describing. (It is never stated which country Smith is working for, so through free-association, we attach any current country with whom America has disagreements.) Smith has infiltrated Alpha Control as a doctor and he is responsible for greenlighting the Robinson family’s health. Then giving them a sideways glance. 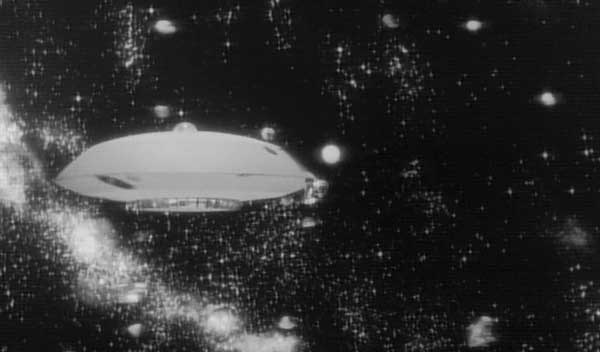 Due to lack of space-faring knowledge, the makers of LOST IN SPACE (creator-writer-director-producer Irwin Allen, and various writers) have the Robinson family board the Jupiter 2 mere minutes before liftoff – I mean, techs are literally tinkering with adjustments 1 minute before liftoff! – and Smith, performing some last-minute sabotage, finds himself trapped onboard the ship when it glows skyward. As an example of how the tone shifted in later episodes, Smith emits a scream when the ship lifts off, but whereas his screams in upcoming episodes would be those of a big girl’s blouse, this first ululation is blood-curdling!

The rest of the series might have been a fun romp, but Episode 01, with its sincere and ominous tone, is gripping entertainment!

Smith’s added weight throws the Jupiter off-course into a meteor storm (more like a crushed aluminum ball storm), which throws the ship even more off-course. As a third strike, the Robot comes to life on his scheduled rampage and makes mincemeat and Movie Sparks out of the navigation equipment.

To state the obvious, and reiterate the show title, an Alpha Control tech speaks to the president on the phone, telling him the Robinsons are hopelessly – LOST IN SPACE.

Guy Williams (already a swashbuckling star as ZORRO in the 1957 TV series), is Professor John Robinson, upstanding patriarch of the Robinson family; Mark Goddard (THE DETECTIVES) is Don (the clipped-delivery Robin to Guy’s suave Batman). Jonathan Harris (from THE THIRD MAN, starring alongside Michael Rennie – who would cameo in LOST IN SPACE; Harris also appeared on 3 episodes of ZORRO) is Dr. Zachary Smith. Harris conned his way into that “Special Guest Star” billing that we’ve always wondered about, i.e. Why is he a Special Guest Star if he is in every episode? 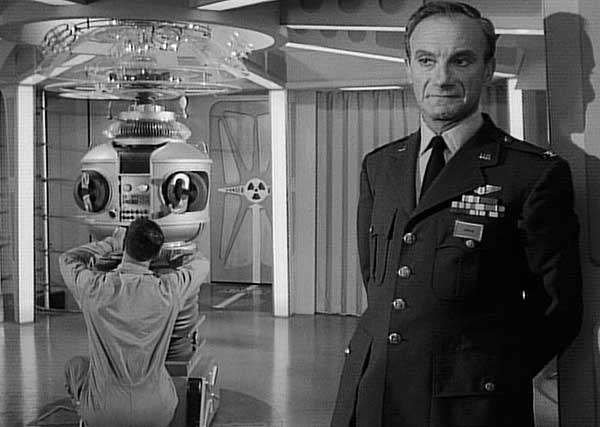 Dr. Smith waits patiently while yet another tech blows the Robot.

Before we meet the family, consider that there is an unaired LOST IN SPACE pilot (Season 1, Episode 00: “No Place To Hide”) that is even more somber and grounded than this Season One opener, giving audiences an understanding of why the whole family is qualified to venture into space, with backstories on the kids’ achievements (Will graduating from a science school at 9 years old, etc.) and the wife’s credentials as a biochemist. Here, we just get their names as they step into their cryo-tubes (called sleeping tubes, because – olden days), and no matter their unmentioned qualifications, during the series their roles would devolve to literally LEAVE IT TO BEAVER IN SPACE, with the wife on kitchen and cleaning duties, the girls on gardening detail, and the youngest boy as mechanic, electronics whiz, laser gun wielder, and savior of the family in many a space-monster predicament, because – male.

Smith is a colonel, and given his due respect in this Episode 01. John Robinson: “Alright, Colonel Smith – that’s enough for now.” Yet after his action man debut, that included espionage and attempted murder (!), Smith would quickly devolve to female roles, which spawned the speculation that Harris’ character, if not Jonathan Harris himself, was gay: he was a good cook, he never participated in the male chores, ran from fights, was relegated to helping the females, and used a more imperious vernacular than the rugged males.

When you see the unaired pilot, that lacked Dr. Smith and the Robot, it becomes apparent what a good job the filmmakers did in rewriting that bland tale to include a tangible villain and a futuristic aide de camp. 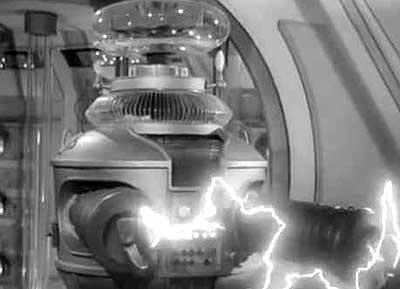 The Robot doing what he does best:
being badass and cute at the same time.

Bob May inhabits the Robot, with Dick Tufeld voicing the lighted mouth. With these two performances going uncredited, for all we knew as schoolkids, he could have been a real robot! His only special effect was his claw arc lightning (that could be done in post); the filmmakers only needed something that could move on treads (and we all had radio-controlled cars that could do that); his head could spin, as could his torso (all simple remote-power moves), and his mouth lighted up (easy to flick a switch on and off); his accordion arms extended and were seemingly a tad more complex, but Hollywood could get around that. So – real robot! Then we saw him kinda “walking” instead of rolling on treads – and that was uncanny valley territory!

Designed by Robert Kinoshita (1914-2014, aged 100!) – who also designed Robbie the Robot from 1956’s FORBIDDEN PLANET (I always knew there was some kind of connection between those two robots!) – the Robot actually had a name, even though everyone just called him “Robot” (except Will, who called him “Robutt,” even as an adult in interviews!). He was Environmental Control Robot B9. Was it a phonetically charming name? Or was it coincidence that he became such a cute, funny, BENIGN presence? At one point he introduces himself to an alien as B9. At another point, he calls himself “the M3 model.” What can we expect from a bumbling bucket of bolts?

Surely the funniest thing about the Robot is the way he pronounces “affirmative” as “all-firmative.” In this first episode, Tufeld put no emotion into the Robot’s monotone delivery; a far cry from Season 3 when the Robot is bemoaning his health and crying and laughing, and generally displaying more emotion than Spock, Data and HAL 9000 put together.

Episode 01 tries hard. Narrator gleefully spouts terms that must have been very new to that TV generation; terms like “escape velocity” – when the Robinsons are already in deep space, way past the point of trying to escape the planet’s gravity with their velocity. And there’s a “weightless” scene, when Professor Robinson “turns off the artificial gravity,” which again, must have been so spanking new to viewers, that the Robinsons get all giggly when floating around (vicariously living the viewers’ fantasies), no one aware that there shouldn’t EVER be gravity on the Jupiter 2 anyway, because it is not creating any centrifugal forces. Then there’s the “hyperdrive” that malfunctions (long before it keeps malfunctioning for Han Solo) and shoots them to a region of space with “not one constellation you could recognize” – but there’s the Eagle Nebula right in front of them! This is not the Kessel Run, Professor Robinson – we’re in the constellation Serpens; work backwards from there…

By this Episode 01, the series had already established most of its now-familiar orchestral themes to convey various levels of excitement, tension and fear, all composed by some young guy listed as “Johnny Williams”… yes, it’s John (JAWS, SUPERMAN, STAR WARS) Williams! No wonder those themes have reverberated around our heads for half a century! Especially when Johnny revamps the opening theme in Season 3, to that 7-stage countdown and epic, sweeping horns!

Professor Robinson goes EVA to fix a McGuffin on the hull of the Jupiter (where it looks like there’s a helluva lotta gravity) and his tether line breaks, Episode 01 ending on a life-threatening cliffhanger as he floats away, grasping wide-eyed back at the ship… 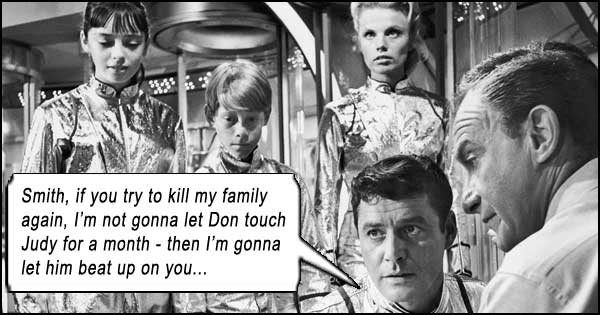 LOST IN SPACE was a TV phenomenon when released in September 1965, and would level out by Season Three, by which time it had morphed to THE DR. SMITH AND WILL ROBINSON SHOW, FEATURING THE ROBOT, camping it up fruitier than any episode of Adam West’s BATMAN (1966). Guy Robinson, for one, was not pleased with the attention shift to Jonathan Harris – he had signed up to play a leading man (and he acquits himself well in every episode in retrospect), but he was no longer always the hero or savior. To this day, it is contention whether shifting the focus of the show from the family patriarch to the comedic sidekicks allowed the show “to last 3 Seasons,” or killed the show “in only 3 Seasons.” Upon re-viewing, we see that only the first few episodes of the black-and-white Season One retained any semblance of scientific gravitas and sobriety, with Smith exhibiting ever-growing signs of feyness as the Season wears on. From a 1999 interview with Billy Mumy, we discover Dr. Smith was slated to be killed off around Episode 6. But Harris admits that he started to re-work the character of Dr. Smith to a more palatable quasi-comedic villain, rather than the one-dimensional Snidely Whiplash type portrayed on the page, and it caught Irwin Allen’s eye. As Harris tells it: “Irwin said to me [ominous voice], ‘I know what you’re doing!’… [comedic stinger] ‘Do MORE of it!'”

Cancelled without warning before its 4th Season, the three Seasons of LOST IN SPACE comprise 84 one-hour episodes, back in the day when a “Season” was at least 24 episodes. It endures in syndication. Never that great of a show, LOST IN SPACE only remains seared in our memory banks as a fun experience because it conjures our youth. Whenever John Robinson strikes that smug pose, whenever Don wants to sock Dr. Smith impetuously, whenever Judy is Blond and Nearby, or Maureen cooks dinner, or Penny is jailbait, or Will yells, “Dad!” or the Robot warns, “Danger, Will Robinson!” or Smith emits a yawp of bi-curious cowardice… we remain… lost in nostalgia…

One Comment on “LOST IN SPACE – SEASON 1-01: THE RELUCTANT STOWAWAY”