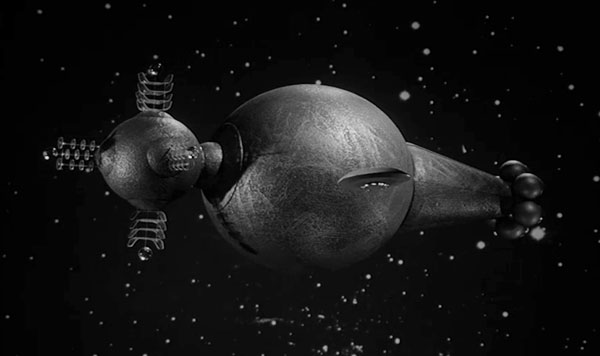 The classic derelict spaceship that terrified us 10-year-olds.

The Space Family Robinson is pulled into a hulking derelict spaceship and attacked by lounge chairs.

LOST IN SPACE Season 1 Episode 2 begins exactly where the last episode left off. Professor John Robinson (Guy Williams) is floating away from the Jupiter 2 after his tow-line has broken, as wife Maureen (June Lockhart) watches helplessly, with the Eagle Nebula brightly mocking them as backdrop.

After Maureen breaks the laws of physics firing tow-lines at John to reel him back in, from inside the ship, Major Don West (Mark Goddard) hits us with more non-physics, identifying a comet heading their way about to fry them (even though comets are exactly the opposite – frozen ice and rock). Don fights to open the stuck airlock to get John and Maureen back in the ship, as they almost burn alive from the comet’s imaginary heat.

Remember this was the first show of its kind, and the general viewing public were no more educated than the filmmakers. Even watching this in retrospect, though there are annoyances (like the three kids watching helplessly when they’re supposedly geniuses), the suspense is dynamite. The series displayed its lack of astronomy knowledge passim, but the performances and filmmaking sold it, at least in these first few episodes of Season 1.

Major West “searches for some clue to their present location” while the Eagle Nebula blares at them from the constellation Serpens. But Don is easily distracted by the Robinsons’ oldest daughter looking like a Norwegian supermodel. Due to 60’s censors, these quiet talky moments between Don and Judy (Marta Kristen) are all we’d ever get, to indicate the boiling-over libido that should be fraying the underpants of this hot young pair of breeders, a billion miles from the nearest fertile humans. (In real life, Mark Goddard would attest that both he and Kristen crushed on each other, but that they never acted upon it, due to both being married. He neglected to say “wink-wink” but we know what time it is…)

The Robinsons come upon a hulking dead-looking alien spaceship, and are pulled into its interior, through its anterior opening which resembles a squid opening its arms. For a tv show, this was truly ominous and scary! These alien sequences from the early episodes always focused on the space exploration theme (as Professor Robinson ponders about the hulk’s cargo and power source); a far cry from what alien encounters would become a few episodes hence, once the family start meeting aliens who all look human and speak English. 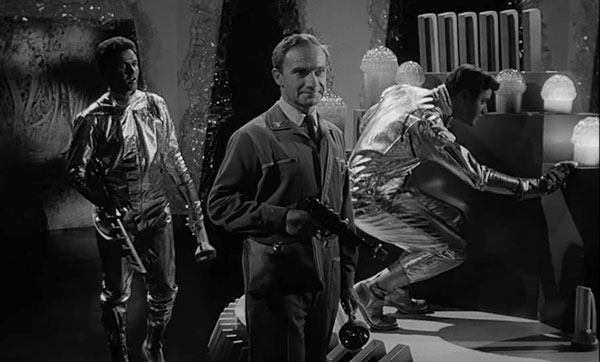 Professor Robinson communicates with the aliens by doing the Watusi.

Guy Williams established his primacy as the Alpha Male so decisively in this first Season, playing the perfect professor, father, husband, protector and moral compass, that even while the next two Seasons skewed to Dr. Smith and Will, his patriarch musk remained ever-potent.

Dr. Smith (Jonathan Harris) is a key component in these first episodes, as the filmmakers continue the plot point that he is a foreign spy. As the Jupiter is tractor-beamed into the alien ship, Smith tries to contact his clandestine spy org: “We’ve sighted your spaceship. Do you have instructions?” Nothing but static as reply, but Smith must be privy to plans that we viewers never find out (like that foreign power actually launching another ship to rendezvous with the Jupiter in deep space – ? – which begs its own offshoot story, doesn’t it?), so he is unperturbed about being asked to explore the hulk with Prof. Robinson and Don; actually, he displays evil delight, far from the cowardly clod he would become soon, leading the way: “Shall we venture in, gentlemen?” When Smith offers to explore the ship further alone, Don says “Don’t get lost,” and Smith retorts, “Never fear” (but omits the “Smith is here” – not invented yet!). He was, of course, hoping to make covert contact with what he thought were his spy allies. Smith was described in one of those LOST IN SPACE behind-the-scenes features as “a foreign agent trying to disrupt the project” throughout the early half of Season 1.

Will (Bill Mumy) is ordered to stay behind on the Jupiter because “there has to be a man around” (unspoken: to guard the simpering ladies). Re-watching LOST IN SPACE over 50 years since its airing, the sexism simply screams off the screen, but we simply took it for granted back then. But I’m not referring to the chivalry of a male guarding women, I’m referring to the writers giving the women absolutely nothing scientific to do, even though every person on the Jupiter was supposedly an integral part of the mission, yet the women might as well be written as if they’re on Earth! How else to account for Maureen, in numerous episodes, shown holding a laundry basket, with the daughters Judy and Penny relegated to cooking and gardening?! On a space mission: NO calculations to make, NO data to enter, NO experiments to conduct, NO charts to examine – NOTHING! Except be shoeless-in-the-kitchen.

Will sneaks out anyway. And despite that BRADY BUNCH plot point (like you can “sneak out” on an interstellar space ship without anyone knowing), the science kicks right back in when Will encounters an alien on the hulk. A bulbous, plump entity that looks for all the world like a plush lounge suite covered in cobwebs, with one lighted “eye.” (Credits call it a “Bubble Creature.”) It speaks in electrical noises, which is a clever way to convey its alien-ness. And Will keeps his head, and tries to communicate… I’m not even sure the writers are aware of how brilliant Will’s reaction is: he’s portrayed as a boy-genius, so when he comes up against something inexplicable, he doesn’t just scream like a ninny, but coolly tries to work the situation through communication. 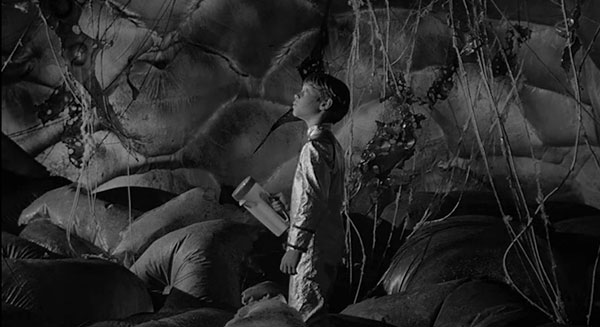 Will fantasizes on how comfy these aliens would be.

In these early episodes, LOST IN SPACE would constantly flip from kooky to science to kooky science, in its dialogue and concepts: earlier, Judy says the galaxy outside the viewport “resembles Andromeda” – which it does! Dr. Smith would tell Professor Robinson he “creates new pathways in cybernetics” – which is pretty impressive modern language for an era with refrigerator-sized computers. And then they would claim they can’t recognize any star systems with the Eagle Nebula staring at them.

And those laser guns were dynamite! Prof. Robinson and Don walk out of the Jupiter (and there’s a full-sized Jupiter model behind them, which in itself is quite impressive!), and on their low-slung gunbelts they’re wielding laser pistols like Old West hipsters!

Smith turns everything pear-shaped when he lasers the alien that Will is trying to communicate with. Funny how the lasers never actually DO any harm to any aliens, except piss them off. The aliens give chase to our heroes, looking for all the world like lumpy sofas being trundled along on hidden wheels (which they were, of course), and the Robinson family make good their escape, Prof. Robinson “blasting his way out” of the derelict, with a cool laser rifle.

John would write an entry in his log book (while narrating), before they set us up for the next adventure – nearing a planet that they must land on to make repairs. Maureen tries to veto the landing, for some reason not able to understand what the MEN are telling her about required maintenance. Just like a woman!