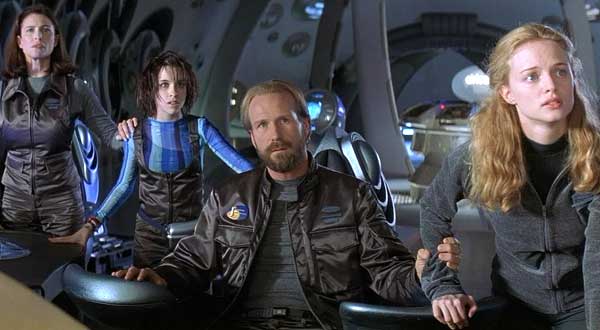 Falling into a dying star is no time to play Follow The Sexy Leader.

LOST IN SPACE blasts off as a well-produced science fiction adventure, then gets lost loster than its lostest characters.

Brought to the big screen from the 1965 TV series, LOST IN SPACE captures much of the dynamics between all the characters originally created by Irwin Allen; it updates the tech, the spaceship, the production value; it gives nods and winks to the original’s aged and ageless fans; it adds dimensions to the interaction between the characters we’ve known and loved for decades – and then it goes and puts them in a story so dull and effects-laden, we want to do to the movie what Don wants to do to Judy while she’s in cryo-sleep.

Movie opens quite abruptly at an orbiting construction site (the “hypergate”), in the year 2058, accompanied by useless and silly narration, as William Hurt tells us “warring nations had forgotten their differences and The United Global Space Force was constructing this hypergate to colonize space.” Firstly, the phrase “forgotten their differences” should really bug anyone even mildly aware of the nuances behind geopolitical alliances and hostilities; but in the very next breath, Hurt tells us terrorists are preparing to strike— So there goes all that dumb talk about peace! And we see that narration itself as a geopolitical tactic: the filmmakers want international screenings and no boycotts by naming any hostile nations. (It’s what the ’65 original did in its own way, by claiming, “other countries sabotaging the mission.”)

Then we open on a space dogfight around the hypergate, featuring rugged, principled fighter pilot Don West (Matt LeBlanc) – movie already gambling with its credibility by introducing this mannequin-faced non-actor on loan from FRIENDS in its first scenes – repelling some of those aforementioned terrorists. Movie also gambles that the thoughtful, intriguing concept of interstellar colonization should come with an appetizer of Pretty Orange Explosions and pew-pew lasers. And Joey Tribbiani. 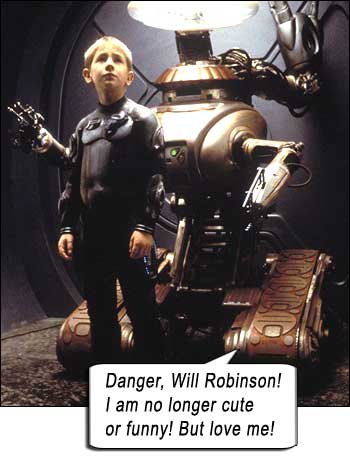 At last we arrive at the meat: a press conference for the mission to Alpha Prime (We presume, from prior knowledge, it’s the name of a planet in the Alpha Centauri triple-star system, although this is never mentioned. Matter of fact, LOST IN SPACE 1965 was where I first heard of the concept and name of Alpha Centauri being the closest star to Earth – I’m sure I was not the first ten-year-old to learn this!)

William Hurt is Professor John Robinson, the staid, preoccupied patriarch of the first family in space, the Robinsons (Hurt is brilliant, his underplaying just beautiful; he’s a walking, talking Actor’s Guide to Acting!).

Mimi Rogers (AUSTIN POWERS) is John’s biochemist wife, an understanding mother and loving partner; unafraid to take a strong hand to keep him in check when he and Don are “hosing down the deck with testosterone” (i.e. arguing over who’s in command of the mission).

Heather Graham (who would appear in AUSTIN POWERS 2) is mouthwatering Judy – no wonder Don wants her so bad! – eldest daughter and ship’s doctor; she tamps down Don’s libido at their first meeting, “Those who can’t think, fight.” That doesn’t stop him from thinking – about her deep space.

Lacey Chaubert is Penny, with the type of annoying squeezetoy voice that will only attract pedophiles and wife-beaters. She’s the teen demo: hooker mascara, rad clothes, doesn’t want to leave her friends on Earth, makes video diaries, is brought home frequently by cops for misbehavin’ – whatever; it’s amusing that even in the 2018 reboot, Penny’s character is crafted for the same teen demo (which has morphed to Angsty Millennial), yet Original Penny was just an innocent pre-teen (although she did get froozy in that episode where they went to that teen planet – hey! Maybe Penny was a Bad Girl after all!).

Expressionless Jack Johnson is Will, youngest child, smartest geek. Not a great actor, but then, surround him with tech and hope for the best. Thus it is Will who becomes closest to the Robot, only because he has the technical knowledge on how to control him. And the Robot—

He-hey! That voice! We’d recognize it from the sands of Saudi Arabia to the deserts of Alpha Prime – it’s Dick Tufeld, original voice of the 1965 Robot! And yes, he gets in a coupla solid “Danger, Will Robinson”s to make us tumescent. Designed to look like he has an evil twin growing out of his lower body, only later would he be redesigned by Will to minimally resemble our beloved bubble-headed booby!

The absent father, the strong mother, the too-busy daughter, the vogue daughter, the brilliant son, the egotistic pilot, the Robot helper, and – the saboteur, Dr. Zachary Smith!

The megalith Gary Oldman (AIR FORCE ONE) plays Dr. Smith as a hybrid of Saboteur Jonathan Harris (from the first few episodes of Season 1, 1965) and Effete Jonathan Harris (Seasons 2 and 3). Only Oldman could pull off such a subtle, dangerous, funny, lethal role, from his aversion to facing danger, to his epithets for the Robot (“You mechanical moron!”); at times we can’t tell where Jonathan Harris ends and Oldman begins.

Five original cast members cameo: June Lockhart (aka Maureen), Marta Kristen (aka Judy), Angela Cartwright (aka Penny), Mark Goddard (aka Don West), with quite a meaty role as the General who introduces Professor Robinson to this movie’s Don West. And Dick Tufeld, still stuck inside the Robot. (Bill Mumy wanted to appear as the Older Will, which would have made for a great meta twist, but obviously his agent wasn’t shark enough.)

In retrospect, this is probably Matt LeBlanc’s best acting role of his career. Not kidding or being sarcastic. In between taping FRIENDS episodes, he flies back and forth to this film set to play it straighter than any straight man, as a hotshot pilot who’s loyal to Robinson, hot for Judy, got a hardon for Smith and pilots the Jupiter 2 like a Harley in space. Unfortunately, he’s completely overshadowed like a planet being eclipsed by a thousand suns, by appearing alongside two of the greatest actors of any generation: when he’s not interacting with Hurt, he’s facing down Oldman! Poor, poor boy! It’s ludicrous seeing LeBlanc’s le blank expressions up against either of these thespian giants.

Well, this movie did one thing right by failing: It stopped Matt LeBlanc from going on to become an action hero. I don’t think I could live in a society with Matt LeBlanc in place of Bruce Willis.

The opening plot is homage to 1965’s Season 1 Episode 1 “The Reluctant Stowaway,” where Dr. Smith programs the Robot to destroy the ship in flight, and is then stuck onboard. There is a better-written dilemma here, where Smith is double-crossed by his bosses (Edward Fox) and left to die in the Jupiter 2 to eradicate evidence of their sabotage.

There is an outer covering on the Jupiter 2, called – appropriately – Jupiter 1. These space agency scenes are pretty legit during launch, although I don’t know why they would launch a vehicle into space in that flat saucer position, causing maximum drag. Anyway, Jupiter 1 cracks open in orbit and Jupiter 2 emerges, shaped like three bubbles squashed together.

It is when the Robinsons reach deep space that the bad decisions really start to pile up – not from the crew on the ship, but the crew on the film. Akiva Goldsman screenplays, trying to make up for his abortion BATMAN & ROBIN (1997) from the year before, and Stephen Hopkins (THE GHOST AND THE DARKNESS) directs, and together they turn a grand adventure into so much trope and cliché and stupidity.

The process by which the Robinsons reach deep space is good writing: the Robot starts destroying the ship, and Smith desperately wakes the hibernating family, who discover the Jupiter is caught in the Sun’s gravitational pull (a nod to one of the plots in the original series). They use the new “hyperdrive” to shoot through the Sun – and without a hypergate on the other end, they know it will shoot them into unchartered space. Which happens. 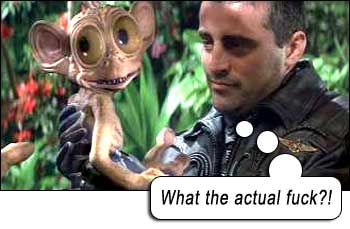 The Robinsons encounter a ghost ship, whose records show it is from Earth’s future, on a rescue mission of the Jupiter and its crew! The filmmakers then turn this cerebral plot development into – CGI spiders chasing the family, and stupid CGI helmets and war masks. So they escape and can circle back to exploring that time-warp plot—nope, it’s Pretty Orange Explosion time as Don blows up the ghost ship for no reason other than to excite ten-year-olds who were falling asleep with the wormhole-to-the-future plot.

I HATE CGI INSECTOIDS! This film was probably one of the first to use them, but they’ve become a staple in many futuristic films; I guess they’re easy to render. The only role they fulfill is creating more runtime for the movie, and are NEVER necessary to move the plot forward. A spider bites Smith, who will turn into an insectoid in the final act – but we don’t need a swarm of spiders for that plot point – it only takes one, if at all.

The Jupiter immediately crash-lands on a planet (with breathable air, mind you! – the original series taught us well!), and the adventure seems to stall.

The last act is a dichotomy of good ideas coupled with bad execution, as the filmmakers explore the wormhole plot to a poignant conclusion.

The potential for LOST IN SPACE was always high. It’s obvious Irwin Allen Productions and New Line Cinema wanted this movie to be the “pilot” for a trail of sequels ad infinitum. Writer Goldsman even started with a sincere idea – to reboot the camp ’65 series with ‘90’s grit, which was enough of a pitch to get Gary Oldman onboard as the first powerful cast member, which induced other stars to join. Where did it all go wrong? I’m blaming the ambition of the filmmakers which outpaced the technology of the day, and a little blame to casting for even putting forward Matt LeBlanc’s name as the action hero stereotype played against Hurt’s intellectual. LOST IN SPACE came at us like it knew what needed fixing from the original series. And ends up fixing many elements and then breaking them again worse than before.