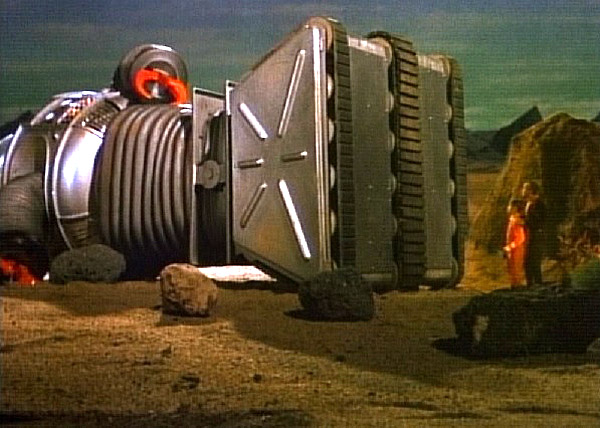 Will and Dr. Smith look up the Robot’s skirt, and like what they see.

Will Robinson and Dr. Smith go into the body of the Robot, grown gigantic, to re-program him down to normal size, and get trapped as the Robot starts to shrink – in the most terrifying LOST IN SPACE episode ever. At least, for ten-year-old boys.

By Season 2 (September 1966), LOST IN SPACE was churning out some pretty surreal wig-twirlers, but Episode 26 “Trip Through The Robot” has got to be the trippiest. I mean, what was writer Barney Slater snorting to come up with the plot of the Robot becoming gigantic? And then having Will go inside the Robot to fix him! They just don’t make drugs like they used to.

Episode opens with Dr. Smith (Jonathan Harris) inadvertently destroying the Jupiter’s power units, and Don (Mark Goddard) about to beat the shit out of him, until Professor Robinson (Guy Williams) halts the festivities. Smith adheres to pecking order protocol and doesn’t say boo to Don, but turns to the Robot (Bob May, voiced by Dick Tufeld) and lets fly one of his salty sobriquets: “You pusillanimous pipsqueak – it’s all your fault!”

Later, the Robot starts groaning (- groaning?!) – to Will (Bill Mumy), “I feel faint” (– he feels FAINT?!) because he hasn’t been recharged in weeks. “I think I’d better go lie down” (- lie down?!). Is this dude a Robot or a retiree? Due to Prof. Robinson and Don fixing the power units, the Robot can’t recharge just yet. So what does he do? Instead of waiting around for the power to be fixed – you know, the LOGICAL thing to do – he wanders off into the wilderness like the bubble-headed booby that Dr. Smith always proclaims him to be, walking the Earth like Jules from PULP FICTION, leaving a “suicide note” on Penny’s tape recorder (that’s an old-fashioned mp3 player, kids!) about going somewhere private to die. Bit of a drama queen; that’s what hanging around Dr. Smith for two whole seasons will do to you…

There is a chilling scene that is meant to be comedic: the family is devastated over the Robot’s message, while Dr. Smith remains aggressively ambivalent about it. Time and again during the whole series, Smith would prove himself a selfish lowlife with no principles and no thought to anyone’s comfort but his own; we lose count of how many times he puts the Robinson family in mortal danger through his ignorance, avarice and sloth. Indeed, in this very episode, Smith once again lies to save his own skin, while leaving Will behind to die!

Robot wanders into a place marked with a handwritten sign, “Dangerous Area.” (We figure the Robinsons must have erected that sign, although how long were they on this planet to monitor this area as “dangerous,” and what “danger” specifically?) Then he collapses and falls over in fatigue. This image of a powerful figure fallen helplessly and flailing was a disturbing sight to my young eyes. Robot says “Farewell” to no one in particular, and it is scarring to see him so near death…

Will, with Dr. Smith tagging along, goes in search of the Robot, and finds him in the “Valley of Shadows.” (We figure the Robinsons also named this valley, although that doesn’t explain the condition the Robot is in; matter of fact, does that name serve any purpose other than to scare Dr. Smith?)

Will finds the Robot on his back, literally as big as a house, speaking slowly, as if under the thrall of fatigue. Will mouths some specious explanation on WHY the robot has grown (but not HOW he has defied the laws of physics to create matter from nothing – I mean, matter can neither be created nor destroyed, so where did all the Robot’s extra molecules and meat come from? How could he possibly be an exact giant version of himself? No matter, as Will realizes a way to make the Robot shrink back down to normal size – all he has to do is blah the blah with the blah blah bullshit – let’s face it, Will could say ANYTHING and it would make just as much non-sense.

Entering the Robot’s body through a panel on the bottom of the Robot’s treads, Will and Dr. Smith make their way to the Robot’s beating “heart” while machinery blips and sploinks around them. They squeeze through iron girders and “computerized” panels of lights and switches, all the while giving me aneurysms contemplating the fact that these are living organisms inside another conscious entity. There seemed something so psychologically askew with this scenario. And this was not the only story of its kind… 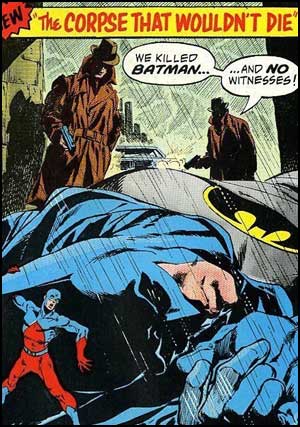 FANTASTIC VOYAGE (1966): The film about scientists who are shrunk down to enter a man’s bloodstream and remove a clot from his brain was also a disturbing adventure, for me at least. I viewed this film around the same time as this LOST IN SPACE episode.

THE BRAVE AND THE BOLD #115 (1974): Amongst the astounding adventures of my favorite superheroes, came one distinctly disturbing story – “The Corpse That Wouldn’t Die” – where Batman is shot and goes into a coma. The Atom shrinks down and goes into Batman’s brain, stimulating it in certain areas to animate Batman’s unconscious body – making him walk and punch to solve his own murder!

All these morbid tales created a synergy of disquiet in my young cucumber innards. There was something that repulsed and horrified me about the inner workings of a sentient being. Nothing to do with souls, religion or the metaphysical; this was purely a physical kneejerk – there was so much going on within the complexity of the human body (or in the Robot’s mechanical one) and even though there are doctors that operate on human bodies every day, how can we ever know how it truly works?; why there is pain where no pain receptors are located; why one person is dyslexic and another able to calculate like a computer; how the body heals itself without external drugs; why we wear down after approximately 70 years on Earth, when regrowth and restoration become decay and death. I’d better stop before I scare myself again…

Will and Dr. Smith arrive at yet another disturbing tableau: the Robot’s “heart” – a giant triangular mechanism made of a translucent substance, beating up and down, with capillaries painted on its surface! Oh my God! As I held in the vomit, Will speaks to the Robot, who replies tiredly that he is fading fast. (We can see a visual of the Robot’s lighted mouth, high in the rafters, as if from the inside, completing the illusion that Will and Smith are indeed inside the giant mechanical man.) And then – his heart stops!

Will tries futilely to restart its “beating,” to no avail. At this point, I can’t believe I didn’t have my own youthful heart attack, I was in so much anxiety! They failed to save the Robot! The most beloved character in LOST IN SPACE was gone! Dead!—

But wait! Will says some more bullshit about re-directing the power from the blah to the blah and re-connecting the ionic blah to the electrical blah! And he does! And the heart re-starts! Oh, frabjous day! But this also triggers the Robot shrinking back to his normal size—

But Will and Dr. Smith are still inside him!

As metal gadgets and gizmos inside the Robot slide this way and that, simulating “shrinking,” with Will and Smith fleeing desperately, squeezing between the gaps in tubes and pipes supposedly getting smaller, I was seeing neurotic visions of Will’s flesh squashed into the crevices of the Robot when it shrunk down to size, Will’s blood and bones simply pulverized by the inexorable steel sliding back into place. 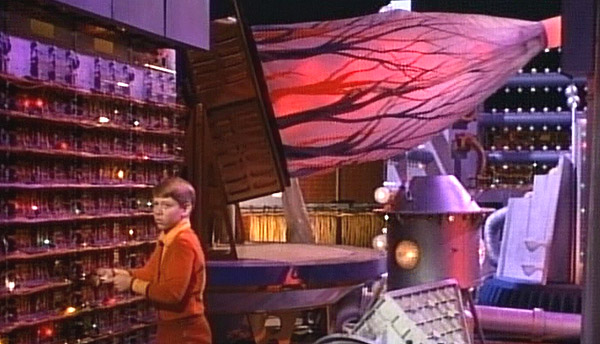 Will hearts the Robot.

It’s a heart-stopping sequence, Will really selling that he is getting stuck in between machinery getting smaller (when it’s all just being moved closer together by unseen grips), while John Williams’ familiar tension-drenched motifs pummel us into madness.

As Will and Smith drag themselves toward that opening in the Robot’s tread, Smith races ahead. At this point, Prof. Robinson and Don appear before Smith. They had discovered the Robot and realized that Will and Smith were inside. And here is that proof that Dr. Smith should have probably been beaten to death by Don in order to retain a semblance of civility and human propriety in the Robinson clan: Prof. Robinson asks, “Where’s Will?” and Smith, without flinching, says, “He’s outside!” So Don and Robinson help Smith through the dire tangle of pipes and mechanical ganglion. Near the exit, Robinson asks Smith one last time, deliberately, “Are you sure my son is out there?” and Smith once again lies to Robinson’s face without a second’s hesitation. Meanwhile, Will is seen crawling through pinching metal and screaming for help!

At this point, with the jogging orchestra, the shrinking, the morbidity of the Robot imminently crushing Will, imagining the possibility of Will’s brain splattering into the innards of the Robot – I was panicking, I was hyperventilating, I was positively defibrillating!

Robinson hears Will’s cries when he himself is outside, but he cannot get back into the shrunken panel to help his son, so must reach into the opening and clutch at Will, straining as hard as the orchestra is pumping; fingers stretching, Robot shrinking, metal groaning shut –

I was just a kid! Can you blame me for not understanding that nobody was going to die? But this episode made for some sensational suspense! Totally illogical, unscientific and campy, the nostalgia of LOST IN SPACE lends it a deceptive sheen of quality. Intellectually, I know this show is crap on toast, but that ten year old is still in here somewhere, trapped like Will inside the Robot… Dare I let him out?…