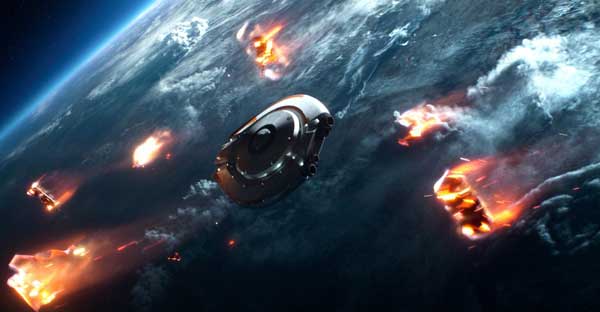 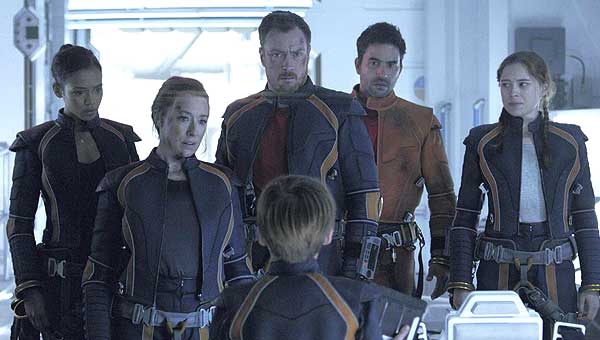 Danger, Will Robinson: They know you took the cookies.

One of the formative TV shows of our youth, LOST IN SPACE, is rebooted as an enjoyable Netflix series, capturing all the dynamics of the original show, and leaving out the camp and the bubble-headed booby.

In the year 2046, the space-faring Family Robinson leaves a dying Earth, onboard a mothership of colonists, headed for the star system Alpha Centauri. En route, they are thrown off-course by an alien attack and separated from the mothership in their “pod,” the Jupiter 2 spacecraft. Crash-landing in uncharted territory, the Robinsons struggle to survive and regroup with other mothership survivors, or risk forever being – lost in space.

Clint Eastwood lookalike Toby Stephens (BLACK SAILS) is John Robinson, pilot of the Jupiter, a former Marine and absent father; sensual Molly Parker (HOUSE OF CARDS) is John’s estranged wife Maureen, aerospace engineer and captain of the Jupiter. 12-year-old Maxwell Jenkins is youngest child to the couple, Will Robinson, a scientific polymath; Mina Sundwall is teen Penny (whose scientific expertise I couldn’t quite figure) and Taylor Russell is 18-year-old Judy, oldest child from a previous father, and accredited doctor. (In the original 1965 series, only the unaired pilot episode detailed the scientific qualifications of the Robinson family, and since the public never saw that episode, there was no real nod given to science in that whole series. I’m so glad to see the explicit lean on intelligence and hard learning in this 2018 series.)

And the coolest cat of all – the Robot. But it isn’t part of the Jupiter crew (as the original Robot was) – it is an alien technomorph that Will befriends. There are many criticisms of the writing in this series, and the Robot’s “rescue” is a large plothole in Episode 01. With the powers it displays in later episodes – even in the scenes directly after its rescue! – it could not possibly have been trapped in this manner in a tree. Its incapacitation was a device for Will to “save” it, so it would be indebted and devote its power cells to Will’s service. Reminding us a little of Val Kilmer’s dog-robot A.M.E.E. (from RED PLANET), his face like a swirling stream of stars (like Rorschach from WATCHMEN), this A.I. Robot is inhabited by Brian Steele, the man second only to Doug Jones as the man-behind-the-motion-capture-monsters. 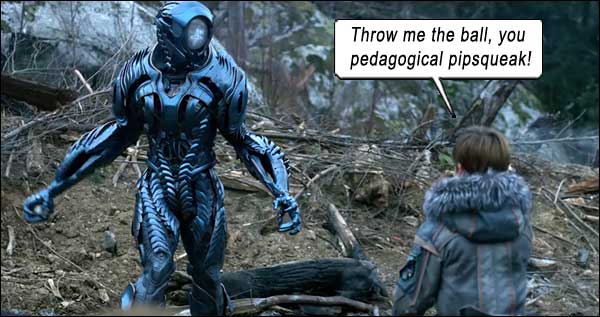 And Dr. Smith is a woman! Parker Posey (SUPERMAN RETURNS) is sociopath June Harris, a character exactly like Dumbo Donald Trump, in that every single thing she says is a lie. She steals the identity of a “real” Dr. Zachary Smith (cameo by none other than Bill Mumy!) and masquerades as a psychiatrist. At times, we wonder whether Posey’s wily, cynical grifter goes too far, her lies causing life-threatening situations, but upon re-viewing some of the original 1965 episodes, we see Dr. Smith has always been a liar of Dumbo Donald-ian proportions. For example, in episode 2-26 “Trip Through The Robot,” when Professor Robinson is inside the Robot saving Dr. Smith, he asks Smith, “Where’s Will?” and Smith replies without hesitation, “He’s outside,” so that Robinson will save Smith without the distraction of going back to save Will, whom Smith KNOWS is still trapped in the shrinking Robot! And once you accept that Smith is a sociopath (no matter how fruity or funny Harris made him), you start to realize how many of his lies might have led to peoples’ deaths, and you really wonder how the Robinsons never threw him out the airlock, as Don West suggested so many times…

Ignacio Serricchio (BONES) is Major Don West here, a mechanic on the mothership, The Resolute. Don is combination Jeremy Piven, Andrew Dice Clay, and every mobbed-up Italian from Little Italy. We imagine women put up with his braggadocio because he tempers it with that roguish smile; he’s a good-hearted con-man, not like the treacherous con-artistry of Smith. He might lie that he could fix your ship “with the right tools,” but he’ll be there to haul you out of the burning wreck, after it wasn’t fixed correctly by him. We discover in a later episode he is a smuggler of alcohol to the colonies—wait, so Don is a pilot, a smuggler, and a… rogue? I guess the galaxy needed another Han Solo after what Kylo Ren did. 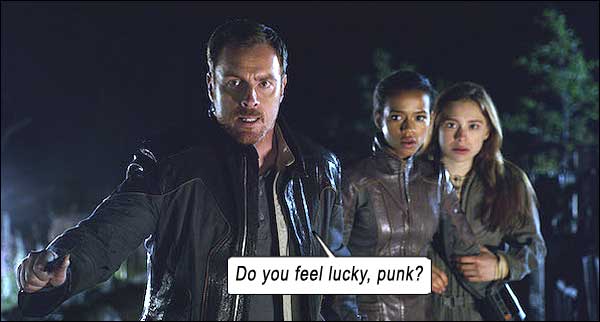 The series creators (showrunner Zack Estrin and head writers Matt Sazama and Burk Sharpless) have artfully re-crafted all the characters we know so well and forged the same types of interactions between them (i.e. Dr. Smith’s vicarious interactions with Will, Will’s obsessive TO CATCH A PREDATOR relationship with the Robot, Don’s quest to get lost in Judy’s space, Don’s hatred of Smith, etc.); not only that, the series ethos can only be described as “woke” (i.e. Maureen is the female captain rather than just the dutiful wife who prepares meals from their hydroponic garden, Judy is bi-racial and doesn’t pine after Don, all the female characters from other Jupiters are as integral to their missions as the females on the Jupiter 2. And Dr. Smith is a woman!).

That epic theme music from Season 3 of the original (written by John Williams) is a recurring motif, but rewritten by Christopher Lennertz so that it doesn’t “resolve” but floats off lost in space somewhere. Very annoying. There are scenes where the Jupiter 2 breaks out of a smoke-bank or into space, and the theme kicks in, and it brings tears to the eyes, and then – NO RESOLUTION. The theme just dies on the vine where the original would resolve and “turn around” for another stab. I thumb my nose at your street cred, Christopher.

In this first episode, “Impact,” the Robinsons must fight for survival against some very distressing situations (although Judy getting trapped in ice could only occur with the non-scientific unreality of a lake freezing from the bottom to the top!). The tale flashbacks at intervals to flesh out the characters and story: the Robinsons’ Jupiter 2 and scores of other Jupiters are part of a pioneering mission to Alpha Centauri, onboard a mothership called The Resolute, which suffers an alien attack that prompts the evacuation of all the Jupiters and their families.

We see the Robinson family before the mission, when John Robinson and Maureen were deeply in love (something about their relationship feels strained in the first episode and it is written and performed very subtly). Dr. Smith’s and Don West’s fateful insertions into the tale would be seen towards the end. And we also glean the scope of the colonization mission when we see The Resolute mothership in all its massive glory, the scores of Jupiter pods attached to it like flowers on vines. (The Jupiter shape is very cool – a cross between the original’s flying saucer design and the Millennium Falcon.

“I KNEW I shoulda taken that left turn at Albuquerque!”

Episode 01 begins with the family in full spacesuits and helmets, strapped to their seats around a circular table (I like it already! A modern spaceship with spacesuits, helmets and seatbelts!), playing cards in weightlessness onboard their Jupiter – but we know from the tension in the air it is only to take their minds off something horrible. We would have to wait for the final magnificent CGI scenes of this episode to reveal the cause of the terror – as we see the destruction of the mothership, while many Jupiters try to fly from its exploding debris; we see the first indications of atmosphere (of the planet this mêlée is orbiting) as the Jupiters and the debris start making slight contrails – and then the fleeing Jupiters are caught in the jetstream of flaming debris…

The number of negative reviews for this new LOST IN SPACE is startling. I am guessing these negative critiques are from people over 40, who compare the 2018 version to the original 1965 series that still lingers in their nostalgia memory banks. However, connecting to the original as insensible kids is not the same as viewing the reboot as cynical adults. If these critics are being honest, after its first innovative season in 1965, the original TV series morphed into THE WILL & DR. SMITH SHOW, FEATURING THE ROBOT, and skewed intentionally camp, to please younger audiences. Just because they’ve read a couple of screenplay books and know the word “CGI” now, these kitchen critics think they can judiciously complain about the acting in the 2018 version (which is very good), the effects (which are tentpole-movie standard), and rail about the non-science (which is no better or worse than any “science-based” TV series that has to bend physics for dramatic effect). All this vitriol, as if the 1965 series had Oscar-winning performances, seamless effects and watertight science, what with the mincing of Dr. Smith, the appearing and disappearing aliens in a flash of smokebomb, and every planet having breathable oxygen and every alien speaking English and never once re-fueling the Jupiter 2…

For those who don’t obstinately dismiss this 2018 LOST IN SPACE due to nostalgic idiocy, there is much to enjoy: the sincere character development is all here (dad who was away at war trying to reconnect with his kids, mother trying to find the balance between harridan and encourager, a grifter posing as a psychiatrist who can actually read people’s psyches correctly – because that is an unspoken talent of grifters!; a mechanical man stultifying his inner Hyde, and inspiring with his superhuman power), and the production values are astounding. A noteworthy aspect is that all the roles are scientists, even though some of the science is iffy – but for every bad science item criticized by faux-physicists, two commendable science aspects go unnoticed. And for those who miss Guy Williams’s smug, there is the constant Clint-squinting of Toby Stephens (he can’t help it, yeronner – it’s just his face!); and you gotta admit, you over-40s, that Molly Parker makes a ravishing MILF Maureen; for the millennials, I presume the kids might come off as smarty-pantsy (so Penny is thrown in to balance the nerd factor); and accepting Dr. Smith and the Robot as two very different beings from the originals will depend on your level of wokeness, I guess.