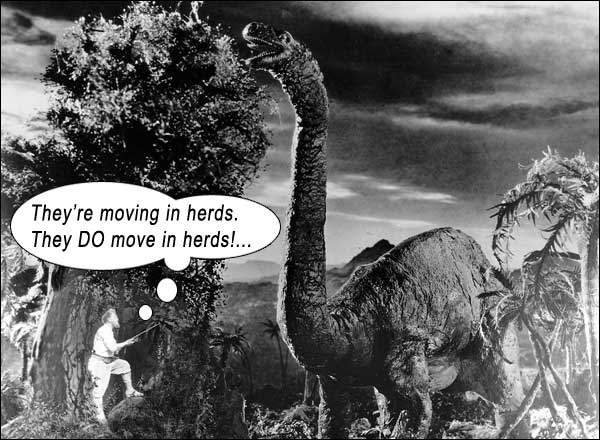 In the beginning, God said, Let there be Willis…

Eight years before Willis O’Brien brought KING KONG (1933) to life with his brilliant stop-motion animation, he used that innovative technique on his very first feature, THE LOST WORLD (1925), a silent movie based on Sir Arthur Conan Doyle’s book (released 1912), in which scientists discover prehistoric animals on an Amazonian plateau.

THE LOST WORLD is the Big Bang of dinosaur/monster movies. We trace a direct line from this seminal film all the way through every iteration and pale imitator of KING KONG, GODZILLA (1954), and JURASSIC PARK (1993). We would have none of these if it weren’t for Willis O’Brien’s pioneering and imaginative forays into bringing dinosaurs to life on the silver screen. 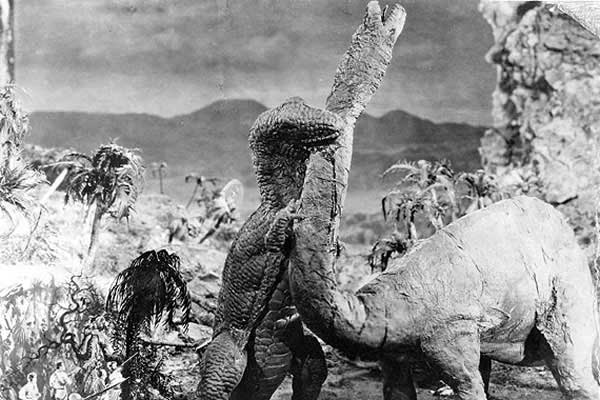 And the Bronto Burger is invented for Fred Flintstone.
[Note the actors in the bottom left of the screen.]

Yes, the models were hopelessly anatomically incorrect, and the stop-motion was rudimentary at best (the triceratops is especially stiff, and looks like it is just being moved around without moving its limbs!), but when Doyle showed footage of the dinosaurs to the Society of American Magicians (with Harry Houdini in attendance!), the New York Times declared the dinosaurs “masterpieces” and “extraordinarily lifelike.” Let’s face it, no one had seen dinos in action before, and the earliest ham-fisted drawings in textbooks represented dinosaurs as sluggish plodding dumbbells. Long before John Ostrom and Robert Bakker debunked those theories, here was O’Brien bringing them to roaring life as action killers.In this modern age of taken-for-granted CGI, there is much to criticize in THE LOST WORLD, but taken in context, it is a surprisingly watchable film. Deviating slightly from the book, we follow Malone (Lloyd Hughes), a young reporter, as he joins an expedition for “great deeds and strange experiences” to impress his girlfriend, who will only marry “a man who can look death in the face without flinching!” Note that back in those black-and-white, title-card days, the request was more literate, the bitch attitude exactly the same. 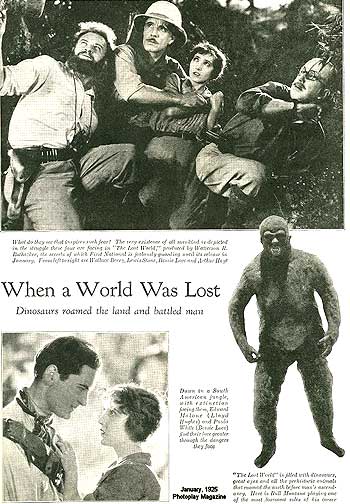 Just so happens a Professor Challenger (Wallace Beery, with the worst pasted-on beard in prehistory) is making claims to the scientific community that he’s about to embark on an expedition where dinosaurs run free, challenging anyone who doesn’t believe him to tag along. Well, that would be EVERYONE, wouldn’t it? Shouldn’t his “invitation” be to those who believe him?

Based on writings in a lost scientist’s journal (named Maple White), brought to him by that scientist’s daughter, Paula (Bessie Love), Challenger, with his small party of overactors, including Malone, does indeed find passage to the Lost World. Ostensibly to find the missing scientist, but truly just to blow their – and the audience’s – minds.

Once on the plateau, the audience gets its money’s worth, as the effects shots pile on dinosaur after dinosaur, feeding, battling, running, plus pterodactyls and ape-men. This movie must have been INSANE in its day. Director Harry O. Hoyt uses process shots to put the stop-motion animals onscreen with the human actors, and though there is no direct interaction between them, through the cunning use of cutaways, inserts and resourceful editing, we can see how a 1925 audience might be riveted on their seat-edges, marveling at the Allosaurus attacking our heroes and being driven away by gunshot wounds.

The action never stops, as a Brontosaurus destroys their tree-bridge back to civilization, a Triceratops family is attacked by the Allosaurus, and an ape-man hounds their trail, then a volcano explodes and all the dinosaurs run screaming, while the roaring orchestra score tries to club us over the head and drag us to its cave to take us roughly from behind.

There’s even enough human drama for the film to claim, “Mighty prehistoric monsters clashing with modern lovers!” The hunter Roxton (Lewis Stone) finds evidence of Maple’s skeleton AND an escape route; meanwhile, thinking they are stranded forever, Malone puts the hard word on Paula (even though his fiancé waits back in London) – and she accepts his advances (meaning they kiss without passion). She also thinks they will find her father here… but then Roxton returns to find the young lovers giggling coquettishly – and tells them of the escape route and her dead father…

It is refreshing to see that this oldest of all dinosaur movies actually represents herbivores authentically (as not chasing humans to eat or harm them, as they do in other films of this era), and it’s quite progressive how Challenger wishes to simply “observe the brontosaurus’ habits” rather than shoot it blindly (like that idiot Carl Denham does to a stegosaur in KING KONG 1933 and then laments on how hard it is to bring one back alive). 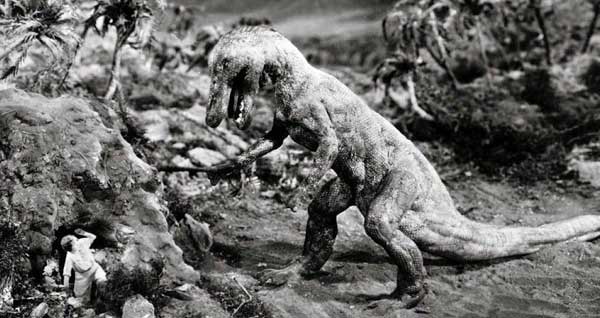 A dinosaur that looks anatomically like a duck-billed herbivore, with a taste for overactors.

The volcano erupts and it’s a cavalcade of dinosaurs running and battling. Quite amazing to see the level of effort that went into this movie’s effects, remembering that nothing was simply “rendered” but hand-crafted frame-by-frame.

A brontosaurus stuck in mud is brought back to London – and decimates the city! Here is the actual creation of the trope of Beast Brought Back to Society and Running Amok (a la KING KONG, VALLEY OF GWANGI, GORGO, JURASSIC PARK: THE LOST WORLD, et al)! There’s even the drunk staggering out of a bar and gazing on the beast like it was a product of his liquor!

The jungle backdrops are all clearly paintings, the theatrical acting will bust a blood vessel, the climax is rushed to a close, and the human drama ends on a decidedly silly note, but THE LOST WORLD is quite good viewing, and not just as an artifact. It’s a grand story after all, told by a master – Arthur Conan Doyle (who appears in the film’s prelude as himself, sitting in his garden attended by his dog). When we were kids, seeing dinosaurs in this rudimentary manner was enough to satisfy our dinosaur jones. Because we didn’t have the foresight to visualize how good dinosaur special effects could become. Without knowing how “real” Spielberg’s saurians could look, we accepted the low bar, rather than not see them “brought to life” at all.

The king of disaster movies, Irwin Allen, could have taken some pointers from this film, as his 1960 remake was one of his biggest disasters.