THE LOVE GURU: another excuse for Mike Myers to act unutterably stupid – and get paid for it. 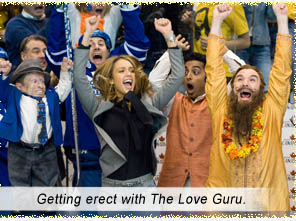 As the Guru Pitka, the usually brilliant Myers is in mediocre form, playing an Indian guru who is hired by Jane (talentless Jessica Alba) to help a recently-separated hockey player, Darren (Romany Malco, THE 40 YEAR OLD VIRGIN), find “balance” (i.e. get his game back on) after his wife leaves him for star player, Jacques “Le Coq” Grande (Justin Timberlake).

Though Myers flounders with that wavering Indian accent and jokes that require him to laugh at them himself, and though Alba is still getting by on the smoothness of her ta-tas rather than acting ability, everyone else is in fine form, especially – surprisingly – Justin Timberlake.

He’s fey, French, and fantastique in this broad comedic role that suits his style more than the unmanageable drama of BLACK SNAKE MOAN. His six-pack tatt speaks for him: The Man, The Legend; one arrow points up, one points down.

Nice to see Verne Troyer (you know, Mini-Me) in an actual speaking role – an asshole, no less – as the domineering, loudmouth hockey coach.

Ben Kingsley reprises his Gandhi, albeit Gandhi for Imbeciles and, of course, nails that Indian accent.

Balance is almost restored – until everyone discovers Guru Pitka took a shortcut in “curing” Darren. And we kinda laugh at him laughing at his own jokes all the way to the Bollywood ending.

The one real laugh is when Pitka is surfing radio stations and – in a nod to WAYNE’S WORLD – flips past Bohemian Rhapsody and does a camera-take.