Two blond white American upper-class people fall in love. Through all the adversity of being blond and white and American. Who coulda seen that coming? 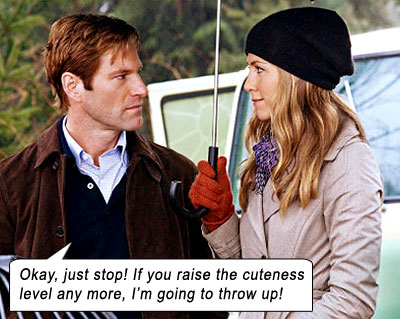 His backstory is compelling – wife died in accident, his father-in-law (Martin Sheen) unforgiving of Burke because the self-help book he penned made him famous on the exploitation of her death. While Aniston’s backstory is typical numb date night fare. But Love Happens anyway.

Excellent supporting performances by Dan Fogler (in a straight role of a humorous character, Burke’s manager, “Lane Goddamned Marshall”) and John Carroll Lynch, as a victim of grief over a dead son. Judy Greer is Aniston’s silly plucky pal. And Sheen’s few onscreen minutes are dynamite.

Don’t know why they bothered inserting the love story sideways into an otherwise interesting film. The tiresome exchanges between Burke and Eloise derail the movie’s real poignant heart – that of a healer who hasn’t healed himself, who seems to be a snake oil salesman at first, but maybe faking sincerity enough for his “I’m A-Okay” shtick to have a positive effect on his followers.

Eckhart sells the nuanced, troubled guru with the right amount of arrogance and pathos. And Jennifer Aniston is, as always, adorable; the type you don’t just bang and run, but put on a pedestal as your loving, caring girlfriend. But the outlandish circumstances of their watery courtship are mind-numbingly egregious.

If this movie wasn’t laden with enough syrupy stupidity, all backed by manipulative tinkling piano, it even has a slow clap, to conclusively take itself out of the running for any kind of credibility.

Aren’t you sick of the beige love story named for a play on words, like WHEN IN ROME, or THE UGLY TRUTH, or (God help us!) DEAR JOHN? I give myself no brownie points for the title of this review – it was way too easy – echoing the two-word review of Spinal Tap’s album “Shark Sandwich.”

quidnunc: a nosy person, a busybody.

sesquipedalianist – the fake constructed dictionary page in the movie shows it as: a person who uses long, unusual, sometimes obscure words in speech or writing.” True, but in etymology, it refers to words that are inordinately long. From Latin sesquipedalis, a foot and a half long, or, in metaphorical use, of an unnatural length, huge, big, from sesqui, one and a half times as great + pedalis, foot.