In the long history of Italian Hercules films, Mickey Hargitay boldly douses himself with cooking oil and lifts things that are kinda heavy, replacing arguably one of the best proponents of the demi-god, Steve Reeves (last seen in HERCULES UNCHAINED, 1959). In fact, Mickey was inspired to bodybuilding by none other than Reeves (strangely, they are both the same age), and won Mr. Universe 1955. And yes, he IS the father of Mariska Hargitay (LAW AND ORDER: SVU).

Mariska’s mother is also here – the talentless Jayne Mansfield (real life wife to Hargitay at the time) as Queen Deianira (pronounced, “look at my tits”). She’s gone down in legend as a sex symbol of the 50’s and 60’s, but if it weren’t for those Dolly Parton-esque chest balloons, and the willingness to prostitute them for Hollywood, would anyone have taken notice of that quite mediocre acting “talent”? Her breathless, pouty, melodramatic theatrical flourish is the Oxford definition of overacting. Always instructed to face the fourth wall when in a scene, so that her melonomas are in perfect view. No matter who she is speaking with in the room, she’s facing OUT HERE in a kind of gentleman’s agreement with her mandibulas. Is that how she got her roles? By getting them “man’s feeled”? Irritating eye-widening, heavy breathing, back-of-hand-to-the-mouth performance, that nonetheless has the strongest man in Greece panting after her boar-like bra. 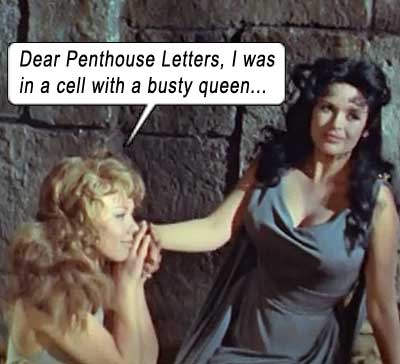 The convoluted story is secondary to these cult of personalities onscreen: Hercules’s wife is killed by the ambitious Licos (Massimo Serato), while Herc is away lifting kinda heavy things. When Hercules returns to find his vapid wife dead, he travels to the land of the king who supposedly killed her. That king is dead, also killed by Licos (this guy gets around). Licos plots to marry Queen Daineraboobs (Mansfield) and claim the throne. But Hercules falls for Queen Dienotitts (not one more wisp of thought devoted to his dead wife), who doesn’t tell him she is betrothed to another guy in a skirt – Achilles. When Achilles returns to claim his big-breasted woman and stamps his feet that she is making googly nips at The Hercster, Licos kills Achilles as well, and frames Hercules for it.

When Hercules learns of the conspiracy, he pursues one of Licos’s men to the lair of the Hydra – a gigantic dragon puppet that Herc pretends is attacking him, and gently beats it with the flat of his sword so as not to ruin the prop– no, wait, what? Oh, I mean, he strikes at the three-headed beast in fury with his manly steel! Then he pretends to fall unconscious (these bodybuilders and their “Acting!”)

He is rescued by Amazon women and taken to their queen Hippolyta (Tina Gloriani), who falls for his continental perm and slippery thighs. To make Hercules love her, she drinks a potion that makes her appear as Queen Danibreastses, and Herc, being the simpleton who can’t discern between true love and fake tits, falls for her.

We have our movie title, ladies and gentlemen.

Oh, and there’s also a scene with Bigfoot and Licos in a cave. I know, right?

The English dubbing is as onerous as you would imagine, but I find it amusing that they dub Hungarian-born Hargitay with a vague Schwarzenegger accent. Everyone else speaks in a generic British timbre, while Hercules does a bad European Terminator.

The most disappointing thing about this version of Hercules is that he never quite displays his superior strength, and there is no finale where he is chained between two big things that he must pull down with all his strungth like a mens.