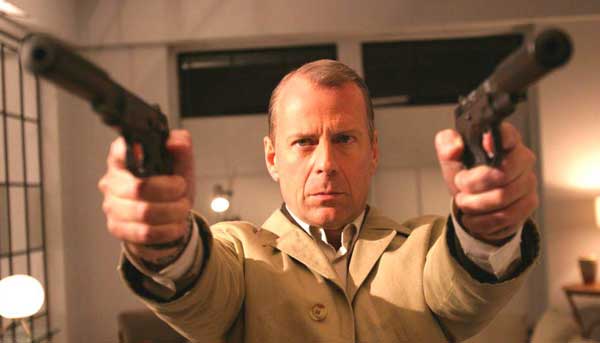 Bruce Willis: Any given Tuesday.

Embedded in the canon of hip street-thuggery, there is Scorcese’s GOODFELLAS, there is Tarantino’s PULP FICTION, there is Ritchie’s SNATCH – all periodically panned for their filmic stylings, yet garnering indirect accolades through their wealth of imitators – but if there is such a thing as “too hip,” Paul McGuigan‘s LUCKY NUMBER SLEVIN would be choking on its own faux street cred.

Sidling past the grandmasters of urban cool, SLEVIN embraces its influences and tilts shamelessly at the zenith of Thug Hip. 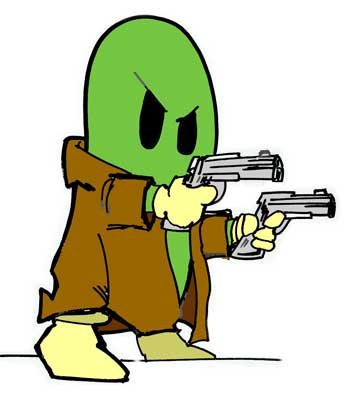 Sometimes it works, as when danger men like Bruce Willis (as hired gun, Mr. Goodkat) or Sir Ben Kingsley (as crime kingpin, The Rabbi) orate Urban, but sometimes it flails for credibility, as when Morgan Freeman (as opposing kingpin, The Boss) tries to convince he’s Bad, or when Josh Hartnett (as title character, Slevin) tries to convince he’s Hard.

The impeccable Stanley Tucci, as the testy New York cop, edges into hip with his seedy, malign temperament, yet is canceled out by Lucy Liu as the Girl Next Door (why doesn’t the Girl Next Door ever look like Janeane Garofalo?), whose contribution to hip is a slavish adherence to Gap-generation mismatched clothes; as titillating yet irritating as a GND usually is, Liu’s presence is an obvious gratuitous intercourse waiting to happen. Oh, and we need The GND for Implausible Happy Ending Protocol.

There’s a sarcasm at work in the title, for at first glance, Boy Slevin is anything but lucky, being mistaken for the guy whose apartment he is crashing in and whisked off with a twice-broken nose (with nary but a bath towel betwixt him and primal exposure) to visit two of the crime bosses of New York City, and told that he owes them both large. The Boss makes a deal with Slevin to cancel his debt in return for a favor: assassinating The Rabbi’s son. But Slevin is not the low-rent thug they think he is… And hitman Goodkat is skulking around, seemingly hired by both The Boss and The Rabbi, for reasons unknown… There is something afoot and we can’t quite focus our thug-dar for all the misdirection thrown at us by the serpentine style of the film-making and the bass-ackwards nature of the film.

A million plot twists later, we discover that SLEVIN is a tale of revenge. The long way ’round. Events go nowhere and twists add up to nothing, but when the layer cake is baked, the Moebius strip winds up making sense – until it tries to make sense of itself. In the last explanatory dialogue (delivered by Robert Forster) all non sequiturs are accounted for, with one glaring exception, a mistake on the film-makers’ part – the motivation of a major player is lacking, to the detriment of the film’s overall enjoyment. And I have to reveal a damning plot twist to explain this anomaly, so plug your ears and lah-lah-lah-lah…

During the movie, we are led to believe that lethal Mr. Goodkat (Willis) is playing both bosses for his own ends (a role much like Willis’ character in LAST MAN STANDING, 1996, one of the many inferior remakes of YOJIMBO, 1961) and that he has “plans” for Slevin, who is in turn being played by the two bosses. In the denouement, it is revealed that twenty years ago, Goodkat was sent to execute Slevin as a boy, but stayed his hand, unbeknownst to his employers. In the present, Goodkat is in fact aiding Slevin’s revenge on the two bosses.

The question is: Why? What possible reason did Goodkat have to renege on his kiddie execution? If it was to groom Slevin as an accomplice, we’d have motivation, but Slevin is NOT his accomplice – on the contrary, Goodkat seems to be aiding Slevin for no recompense. We can speculate all we want about Goodkat doing something moral to palliate his nihilism, or that for the past twenty years, Slevin was in fact in Goodkat’s debt until the revenge job released him from Goodkat’s services. But – as Sloe (Mykelti Washington) tells Slevin – “Tell it to the one-legged man, so he can bump it on down the road.” Speculation schmeculation. 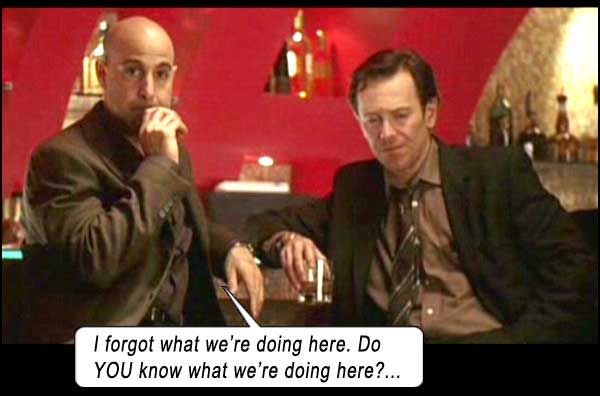 In all the smash-cuts and filtered film, all the mind-numbing wallpaper and misdirection (making pretty-boy Hartnett not so pretty with a broken nose or prison goatee), in all the flashing forward and backward, all the split-screens and strobed scenes, in all the compositing of dialog from different flashbacks and spine-snapping the chronology for more impactful “reveals,” director McGuigan and writer Jason Smilovic strangely – but understandably – neglected to give Goodkat plausible motivation.

Though there was obvious effort expended to create a film more interesting than your average bear – visually, conceptually, linguistically – SLEVIN might have been harder, heavier and hipper were it not for the discrepancy in Willis’ character and the silly girl-boy happy ending.

Best line is Goodkat’s reply to Slevin: “I’m a world-class assassin, fuckhead!” because it seems so altogether true – about BRUCE WILLIS. In one scene, Goodkat, in long, tough-guy overcoat, raises two guns straight forward, arms outstretched, furious intent on his face – an image of Bruce Willis as engraved in our minds as Christ on the Cross.