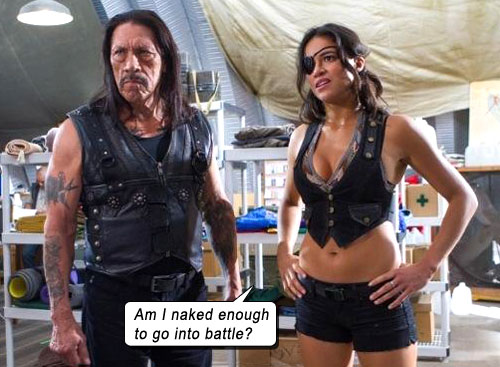 I can’t tell whether MACHETE KILLS is stupider than EXPENDABLES 2 or smarter than JACK REACHER.

Knowing that director/co-writer Robert Rodriguez intentionally crafts this movie with tongue planted firmly in Danny Trejo‘s ass cheek (sorry about the visual) affords it some leeway, however the hyper-reality clashes so discordantly with the ultra-stupidity that Wile E. Coyote called and said he wanted his Acme products back.

In this cartoonish sequel to the equally-cartoonish MACHETE (2010), body-inked, runnel-faced Trejo returns as the unkillable ex-Federale Machete, who is sent on a mission by the president to stop a Mexican terrorist from blowing up Washington DC.

Machete (the kewl pronunciation, of course: “Ma-CHET-ay”) prefers machetes, knives and swords to guns. He has a penchant for speaking of himself in the third person (“Machete don’t tweet!”), and he escapes bullets by running.

The American President Rathbone is credited “and introducing Carlos Estevez” – yep, it’s Charlie Sheen; overacting, underacting – I don’t know what that’s called. Jessica Alba reprises her character from the past movie for a few seconds and is shot immediately (y’know, I agree her acting is so bad that even Zooey Deschanel called and asked for lessons, but putting a bullet in her brain seemed quite extreme). Cuba Gooding Jnr. in a solid few minutes as a gritty assassin (why isn’t this great actor getting more great roles like this?). Lady Gaga takes her clothes off as an assassin, once again trying to distract us from her big Italian nose with her medium-sized dirty pillows. Antonio Banderas plays an American playing a Mexican; so… just playing himself then.

Michelle Rodriguez returns as eyepatched freedom fighter Luz, who escapes bullets by wearing hardly any clothes – because going into battle three-quarters naked is the best way to avoid being shot. I’ve always thought of Sofia Vergara as “Soft Viagra.” I know what you’re thinking, “Who needs Viagra with a curvaceous whore like that?” Coincidentally, here she plays a curvaceous whore – but with a nails-down-blackboard voice that guarantees the need for dick pills. Speaking of dick pills, Amber Heard; only good for two things on this Earth – and neither of them are acting.

Tom Savini (FROM DUSK TILL DAWN) is looking haggard. He killed Machete’s brother (Cheech Marin) in MACHETE; explained into this plot as a good guy because, uh, because he’s friends with the director.

Serendipitously, he delivers half of his exposition while riding a replica of a landspeeder – a prop used in one of the renowned non-acting gigs in the universe.

MACHETE KILLS is one of those movies where bad guys constantly train guns on our Hero and never shoot him. Then when he’s running or leaping to escape them, they’re shooting like maniacs who literally can’t hit the side of a helicopter. In this movie where knives make a “shink” noise every time they’re moved through thin air, is it any wonder helicopters play into some of the most egregious stunts that only 7-year-olds will find entertaining (intestines into the blades, Machete swinging around on the blades chopping people, etc.)?

And the most egregious stunt/plagiarism of all: Machete riding a bomb (a la DR STRANGELOVE) while it is flying toward Washington. Using all his Wile E. Coyote skills, Machete saves the day by cutting the blue wire (it’s always the blue wire, isn’t it?).