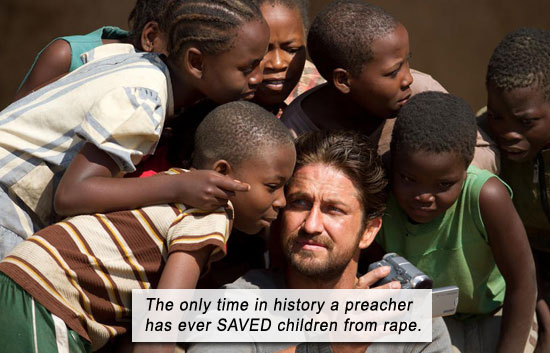 Rebel With A Cause.

And that’s where this real life tale turns slightly sour. Because Sam Childers is doing the greatest of things (rescuing children) for the stupidest of reasons (God). His heart and ammo are in the right place, but his brain is in holy hell. Why couldn’t he do this because he knows it’s the right thing to do? Why does “God” have to lecherously smarm Its way into Childers’s motivation? Did God really have to tell Sam Childers that torturing and raping kids is wrong? He couldn’t figure that out for himself?

Still, this happens to be a case where religion has worked in a positive way – through someone who doesn’t want to turn the other cheek but fight for his right to party. Childers might be a misogynistic, illiterate born-again thug, but he is truly a good-hearted person, and a cut above the average born-againer, because he actually did something tangible and beneficial for the human race.

Once the movie sidles past the tiresome Jesus freak introductions (Childers exiting jail, finding his stripper wife born-again (Michelle Monaghan), hitting bad boy rock bottom, attending church with her and becoming smitten with the plight of African children), MACHINE GUN PREACHER settles into an enjoyable toughguy groove. Childers travels to Sudan and Uganda, battling alongside like-minded warriors rescuing children kidnapped by the Lord’s Resistance Army (LRA). Having committed all manner of brutal violence, including murder, Childers is not averse to redirecting that unsavory element of his personality towards those who deserve it. His street background enables him to be as hard on African guerillas as they are on the populace they terrorize, wielding guns and grenades with as much ferocity as they do.

On his short return trips home from Africa, Childers gets up to preach brimstone at his wife’s church, “God doesn’t want sheep; he wants wolves with teeth to fight the evil that’s out there!” He rages against banks who refuse to lend him money to rebuild a community in Sudan; he sells his business (to his wife’s chagrin) to buy a new truck for Sudan. She implores, “Don’t turn your back on God!” – “He turned his back on me! Did he save those kids? *I* gotta save those kids!” At last – personal responsibility! Was there ever any reason then, to bring up God, that middle man who keeps giving us the middle finger?

Michael Shannon is Donnie, Childers’s best friend, who takes care of Childers’s family while Childers is overseas. Like any well-trained military man who experiences the inhuman horrors of war and cannot return home for the PTSD that war instills, Childers loses patience with Donnie’s and his family’s petty mindset. After killing two child snipers who have killed two of his men, Childers cannot think how to hold a conversation with Donnie on the phone back home, who naively says, “I’d love to get over there” as if Sudan was a resort; after having to select only a few kids to rescue on a small truck and having to leave some behind – only to find them slaughtered upon his return – Childers has no patience for his daughter whining for a limo to the prom…

If he’s doing it for God, then ironically, Childers begins to realize the calamitous psychological toll of playing God: not everyone can be saved every time. Called upon to make merciless decisions like separating the weakest and sickest, leaving behind children too numerous to pile onto a pickup truck, shooting children trained/brainwashed to kill him; every decision a double-edged sword, every action a stab through his conscience.

Quite realistically portrayed, with seemingly very little Hollywood license inserted by writer Jason Keller (MIRROR MIRROR) and director Marc Foster (QUANTUM OF SOLACE), with a powerful, empathetic performance by Gerard Butler (aside from the religious conversion scenes, which seem forced and superfluous). And a stunning turn by young African boy Junior Magale, who has only one speech at a crucial moment, that steals the movie.

The outro titles are chilling: “Joseph Kony and his Lord’s Resistance Army continue their reign of terror in Northern Uganda and Southern Sudan. Amnesty International estimates that Kony and the LRA are responsible for over 400,000 murders and 40,000 child abductions. These children are tortured, raped, sold into sex slavery and forced to take part in ritualized killing by LRA commanders. To this day Sam Childers fights for the children of Southern Sudan and Northern Uganda.”

Whether he’s doing it because it’s right or because God tells him to is moot in the end – because he’s doing it. Which is more than can be said for you or I. Real footage of Childers closes the movie, and he makes this judicious point another way, “If someone abducted your child, and if I said to you, I can bring your child home, does it matter how I bring them home?”

Preach loudly, and carry a big gun, my son.