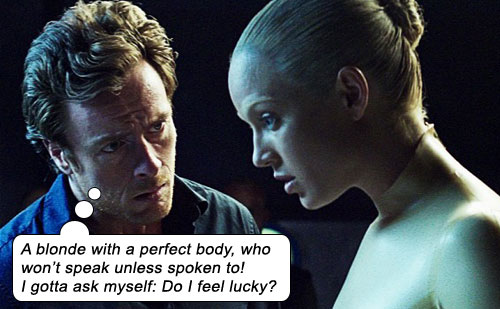 Too intelligent for its steel jugs.

A female robot with artificial intelligence! In other words, a female.

Dark and dispiriting, asking disturbing questions about mind and morality, THE MACHINE mirrors a synergy in motion pictures and techno-culture, intent on pinpointing what makes human beings human.

The near future. No MAD MAX apocalypse yet, though leaning in that direction, if the major powers seek to annihilate each other with A.I. super soldiers. Britain’s Ministry of Defense, in its cold war against China, funds an artificial intelligence/brain implant project, led by Vincent McCarthy (Toby Stephens – Clint Eastwood’s doppelganger. Now that you’ve seen Eastwood in his face, you will never unsee it. He actually played young Eastwood in SPACE COWBOYS). Vincent maps his new female assistant’s brain patterns for the project (Caity Lotz as Ava), and before they get the chance to make The Slomo Sex, she is murdered by a Chinese insurgent, precipitating Vincent downloading her brain map into a robot, an anatomically correct masturbation fantasy which he calls “Machine.”

Vincent’s ulterior agenda is to use the technology from his brain research to cure his young daughter’s Rett Syndrome. The Ministry of Defense director Thomson (Denis Lawson) is, of course, evil, because – Ministry of Defense. His ulterior agenda is not to study A.I. for the sake of benefitting humanity, but to turn the A.I. implants into weapons for the government. Of course.

The rehashed plot in THE MACHINE seems all too familiar, but is it written that way only as a jumping off point into the unfamiliar? In his first feature, writer-director Caradog James attacks the disquieting theme of shrugging off the need for god; unburdening that weight from our shoulders. Caradog also posits that the essence of a person – their “humanity,” their “personality” – can be downloaded as a clutch of electrical signals (as seen in TRANSCENDENCE 2014, and CHAPPIE 2015). Vincent does this not only to Ava, who becomes “Machine,” but his daughter’s brain signals, who will ultimately reside in his computer.

Fascination with A.I. has been existent since Mankind crawled from the muck. In written media, since 1920 at least, with Capek’s play R.U.R. (Rossums Universal Robots), then Lang’s movie METROPOLIS, 1927 (before they put the bulletproof skin on “Machine” she looks like Brigitte Helm’s infamous “Machine Man” in METROPOLIS). Countless other movies have explored “consciousness” and “awareness” (FRANKENSTEIN, SHORT CIRCUIT, ROBOCOP, BLADE RUNNER, THE TERMINATOR, A.I.), but only recently have movies added the element of transferring consciousness, of isolating “personality” and being able to download it like any computer program. This recent spate of movies includes TRANSCENDENCE, CHAPPIE, HER, the 2014 ROBOCOP remake, EX MACHINA, et al. It’s like taking that annoying phrase “There’s an app for that” to its logical, morbid conclusion.

Maybe Collodi’s Pinocchio and Asimov’s Bicentennial Man aspired to “be” human, regarding the human condition as a pinnacle of complexity that only gods and genes could craft – but modern screenwriters have turned the tables on the machines and assert that Mankind is nothing but a series of ones and zeroes when broken down to base elements. In other words, Mankind (at least, according to these writers) is aspiring to the clinical coldness of machine and the ease of portability and manageability that comes with it. More convenient for Thomson the evil boss to implant a secret chip in Machine to force her to negate her morality when it comes time for killing, rather than indoctrinate with years of military academy, HALO 3 and redneck upbringing.

When Machine continues to rebel against doing something immoral, Vincent is forced by Thomson to make her “more like a machine” (the same theme in ROBOCOP 2014). Hits us right in the Big Brother indoctrination nerve. Think about it: in order to make Machine commit premeditated murder on a stranger that has done no wrong to her (i.e. exactly what politicians empower their military to do), the circuitry that makes Machine “human” must be removed; removing her human-ness in order to follow orders. This then, as I’ve stated since Mankind crawled from the muck, is the essence of military training: their humanity is leached from them in order to do their jobs efficiently. Then they complain when they cannot fit back into society after their killing spree is over.

As Vincent removes the chip from her brain, she laments, “I’m losing my self.” He holds out a small disk, “There’s consciousness. Her soul, if you like.” So sayeth every leader who sends their bumboys out to kill in their name, from muslim to christian, from Taliban to Marine.

THE MACHINE is shot in dark, enclosed spaces, clinical underground lab tombs and elegantly visualized holo-computers. The facility is populated by A.I. worker drones who speak their own language to one another (with no subtitles, so it is interesting to note their behavior through body language alone), led by a female robot called Suri (Pooneh Hajimohammadi). (Is that a phonetic nod to that hideous phone program called Siri? Siri, is it raining outside? Poke your head out a goddam window and see for yourself, you lazy fuck!) If the first two acts are intellectual, the third is all explosions and hand-to-hand combat, with Machine and her fellow drones breaking Ministry arms and legs for the pure sake of action that will not solve anything.

And if we pretend that there isn’t the least bit of sexual attraction to Machine (because she’s a machine and that would be morally wrong, or at least disturbingly unethical), then why do the filmmakers allow her to dance naked, yet obscure her nipples and vagina with intermittent internal glowing? And when Vincent finds her cowering in a corner naked, why does he cover her with his coat? She doesn’t feel cold or heat so it must be for modesty. Why? What does he care? Unless he’s getting tumescent looking at her flesh-covered metal titties. (Believe me, after some of the fake jugs I’ve felt, I can relate. Which is also a question for this fake/real dichotomy: how do fake jugs – which we know are not real – make us iron hard visually?)

Though the film has what would be considered an “up” ending, it is disturbing nonetheless, as Vincent retains his daughter only as a computer program. She speaks to him from the screen, as if she is merely skyping, but that is all that she is. He can never hug her or hold her hand; she will never grow old, or need the keys to the car or have boyfriend troubles, or get her first period, or eat another meal. What then is her quality of life going forward? Is this limbo existence the extent of her “being alive”? Was it a blessing or curse to retain her consciousness this way? Thomson’s threat to Vincent was always ‘Do my bidding or I’ll delete your daughter.’ Might that have been a better fate for her? Why is Life – no matter its drudgery or hellish insufficiency in this case – always considered such a premium over non-life?

On a grassy hillside, his daughter speaks from the screen to Vincent, “I want to play with mommy now…” – and the Machine reaches over and takes the screen from Vincent! Waitaminute! “Mommy,” as in Vincent is interfacing with her HDMI port? Isn’t she chromium steel down there, or did they add some Real Doll patented RealSkin to her labia majora?

Artificially intelligent, perfect body, able to grasp emotions, and now – ladyparts! The perfect female. Only better. You can turn her off.