Four spoiled zoo animal friends find their fantasies of living in the wild are far from ideal when they are inadvertently shipped to the jungles of Africa. Loud, slapstick, colorful and – unless you are eight – generally unfunny, MADAGASCAR is a fish-out-of-water tale gasping for air. However, the lemurs are hilarious and the penguins are priceless. 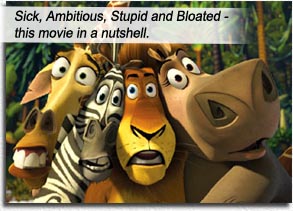 But there is a conceptual flaw baked into the fabric of the film that ruins all its enjoyable moments and good intentions. Yes, the movie is for kids – but, like so many other movies “for kids,” sends a stupid message TO kids.

A lion (voiced by Ben Stiller), a zebra (Chris Rock), a hippopotamus (Jada Pinkett-Smith) and a giraffe (David Schwimmer) are best friends at the Manhattan Zoo. The zebra dreams of frolicking free in Africa, the others revel in their star status at the Zoo (except the hypochondriac giraffe, who, being a hypochondriac, doesn’t enjoy much, but is nonetheless more fulfilled being a hypochondriac IN the zoo than OUT of it).

Once again in a 3D cartoon, real voiceover talent is slighted in favor of marquee stars, who provide the necessary box office clout to divert the audience’s attention from this movie’s ignorant evolutionary gaffes.

Through events that can only be described in these vapid kiddie vehicles as “wacky,” the four friends soon find themselves crated on a barge to Africa. They fall overboard and wash ashore in Madagascar (which they refer to as The Wild – a dig at Disney’s upcoming film of the same name? – featuring both a lion and giraffe in lead roles as well). Missing his regular zoo steaks, the lion reverts to his instinctual carnivorous state, regarding his best pal, the zebra, as lunch.

This – my dear puritans and fundamentalists, concerned parents and animal activists – is called Nature.

Just because people wanna eat the burger doesn’t mean they wanna meet the cow.
–THE ISLAND (2005).

This – is the movie’s baked-in flaw, for the zebra was fantasizing “freedom,” but upon his friend the lion attaining that freedom, the film missteps, treating the lion’s carnivorism as a regress, a relapse, rather than a reversion (or uplifting) to a natural state; an undesirable condition, like alcoholism or mental incapacitation, rather than his genetic heritage. The lion even refers to himself as a “monster” for wanting to eat the ungulate.

But he would be a “monster” in the true evolutionary sense (i.e. a deviant) if he did NOT want to eat the zebra.

The zebra consoles, “You’re NOT a monster!” But his consolation is for the wrong reasons! The zebra believes that the lion’s friendship towards him will win out over the somehow UN-natural state of regarding him as prey.

We are force-fed the notion that killing live prey and eating meat is tantamount to eating your friends.

Of course, kids watching this herbivorist bigotry readily accept its validity because they do not equate those plastic-wrapped, square-shaped steaks from the grocery store with murdered animals. Disguised behind industry and packaging, our society conveniently forgets what we ourselves consume for sustenance: Meat – dead animal flesh! And the hypocrisy of this cartoon is perpetuated without any realization it is hypocrisy.

This movie’s obnoxious message against the life and death relationship we all share with every other creature on Earth has become acceptable because of its ubiquity, grating against all evidence and common sense. The lion needs the nutrients supplied by the zebra’s flesh to live – his metabolism has evolved to process flesh for energy. If he does not eat flesh, he is going to die. His species would not have survived to this day had they not partaken of flesh. Didn’t some Lion King tell us it was the Circle of Life?

Growing up with media like this is what made Kathryn Warburton get up close to that polar bear in Anchorage Zoo, to take its picture, only to have it sink its jaws into her thigh. Then the hilarity starts as someone shouts at the bear, “Stop! Let her go!” – Like all the sensible, anthropomorphized animals they’ve grown up with in media such as this, the polar bear obviously understands English…

Either the lion knew all along that he was suppressing his natural urges through friendship, or he should never realize it. His succumbing to instinct and then being regarded as a deviant displays the highest form of ignorance in the filmmakers (writers Mark Burton, Billy Frolick, Eric Darnell, Tom McGrath; directed by Darnell and McGrath).

A few stupid men annul this four-billion-year-old planet’s circle of life, and those who purport to love the Earth (especially in this faddish new zeitgeist of politically-motivated faux-concern over global warming) reveal their intrinsic contempt for the planet in blindly accepting the twisted message in this movie.

In a final act of turning carnivores into pansies, the penguins solve the lion’s lunch problem by preparing sushi for him. Whereas in FINDING NEMO (2003) all the fish were as cognizant and sentient as the mammals in MADAGASCAR, in Madagascar, apparently – they’re just sushi.