“What have I ever done to make you treat me so disrespectfully?” 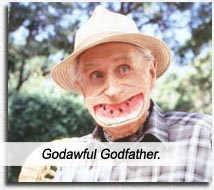 This movie is the severed horse’s head bleeding all over the pajamas of intelligent moviegoers everywhere.

Helmed by writer-director Jim Abrahams – the comedy maverick who brought us AIRPLANE, HOT SHOTS! And THE NAKED GUN – words cannot describe the humor that every single frame of this movie judiciously avoids.

An absolutely dismal, failed attempt at lampooning THE GODFATHER, THE GODFATHER PART II, GOODFELLAS and CASINO, this wretched moan-a-minute abomination stars Jay Mohr as Anthony Cortino (the Michael Corleone analog), who is trying to reconcile his love of civilian Diane (Christina Applegate – named “Diane” because of Keaton?) with his duty to his father’s mafia dealings (Lloyd Bridges as The Godfather). (Sadly, this would be Bridges’s last role. He died in March 1998. During production, how would he ever know that the man who shepherded him through the hilarity of AIRPLANE and HOT SHOTS would let him down so abysmally?)

Performances are uniformly execrable, the bad writing (by Abrahams, Greg Norberg and Michael McManus) feeding off the lackluster acting in an eternal negative reinforcement loop; in other words, the actors have nothing to work with, so don’t put 100% into their roles, and by not giving it their all, the lame “jokes” seem even lamer.

All I can think of during this production is the waste of money and resources that went into the multitude of props and sets, for gags that fall so uncomfortably flat.

Billy Burke is Anthony’s brudda, Joey, who fulfills the roles of Sonny Corleone, Fredo, Carlo Rizzi, and Joe Pesci in CASINO. Watch for Joe Viterelli (who will be De Niro’s bodyguard in ANALYZE THIS. 1999) and Vincent Pastore (who would make his bones as Big Pussy in THE SOPRANOS, 1999).

We will never speak of this film again. It sleeps with the fishes.