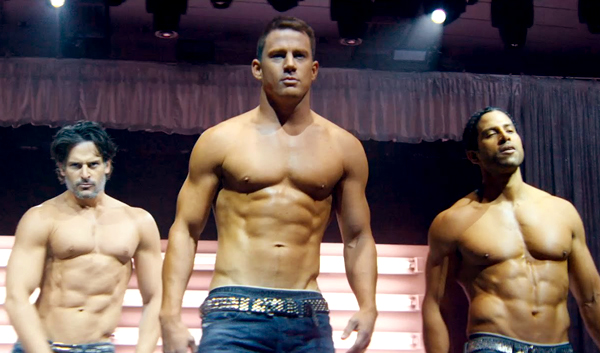 “Hi, we heard that all a girl wants is a good sense of humor, so we’re here to tell some jokes…”

It might be a draw to the female contingent looking for abs of steel and g-stringed butts a-glisten with strawberry body oil, but heterosexual gentlemen will find more interest in watching paint drying on a wet plank than trying to stay awake for the soporific meanderings in MAGIC MIKE XXL.

Channing returns to shake his Tatum as Magic Mike the “male entertainer,” who, since the last film (MAGIC MIKE, 2012), has left the stripper stage and opened his own furniture business, which is doing an average trade, until he hears from his naked buddies from Tampa, who are going on one last cockrocking road trip without Matthew McConaughey, on accounta him disappearing into a black hole.

So begins this monumental bronze-bodied waste of time, as Mike and his whey protein junkies (Joe Manganiello, Kevin Nash, Matt Bomer, Adam Rodriguez – and Gabriel Inglesias as token fatty) embark in a Frozen Yoghurt van to parts unknown, throwing caution and their stripper panties to the wind.

Each of the troupe has his issues and demons, which are resolved in the most insouciant manner (because they’re brahs), except for Manganiello’s doubts about his prowess, which are allayed quite humorously in a gas station grind, to the strains of I Want It That Way by that band that Justin Timberlake was not in.

As stated, McConaughey’s not here, so they emplace his insufferable accent on Andie MacDowell, as hen mother to a group of MILFs whom the boys stumble upon and charm the panties off. Tarzan Kevin Nash gets his introspective moment, Ken-doll Matt Bomer gets his freak on singing a ballad to one of the MILFs, and Manganiello resolves yet another arc here, as one of his ongoing complaints has been the blessing/curse of his XXL member that no woman can handle. Until he meets Andie, whose character goes, uh, deeper than just the McConaughey accent. Y’know, I wanted to see this relationship played out, but movie instead follows Channing cultivating Amber Heard like it’s some kind of “real”-hence-“noble” relationship. And since Heard, a nudity veteran, never once gets her knox out, that relationship is a dead-end also for hetero males.

Jada Pinkett Smith is arrogant Madame Rome (an ex-lover of Mike’s) who runs an upscale male stripper joint; one of the annoying stops on the road trip, where we are surrounded by panty-drenched females ululating like baboons in estrus, seemingly satisfied with strippers who just talk to them and pretend they’re precious. Donald Glover is one of these faux-strippers who gets away with just rapping at a girl. Most unrealistic moment is when he gets the crowd to do a syncopated finger-click to his idiotic rap. You show me a sober crowd of civilians (not musicians) who can pull off a syncopated click like this for more than two seconds before devolving into white noise and I’ll show you some mindless filmmakers who think drunk horny bitches can do the same thing. Royt…

Elizabeth Banks cameos as a lesbian sexpot who runs a stripper convention or something. By now, who cares? We know this is the last stop on the roiders’ road trip where “it’s all going to come together,” right? Where all their dreams of one last blowout with their buds will come true. Where routines created in one day will all be performed flawlessly. On accounta their hardware store montage buying man-supplies, and the construction montage of men man-drilling and practicing man-steps and Discussing Earnestly, that proves our heroes are putting together a gosh-darned super show that will really make their exposed bottoms look classy. I’m almost thinking of waking up now…

Rome introduces each of them, playing “MC,” although I cannot for the life of me see the necessity of this woman talking our ears off before each act as if anyone cares. The audience of female johns will “whooo!” for anything, but really! Aren’t they here to see naked men? Bring it already! Why is this clothed broad prancing around pretending to orgasm while she talks? Turn the tables: would any male audience stand for this much prattling by a male DJ before a female performer, or would his booth be torn down and burned with him in it?

One thing we never see in this stripper movie is the most ignominious part of stripping: the collection of the make-it-rain money. Is every single one of them too kewl for skool to nakedly scrounge and pick up that money that they desperately need? Director Gregory Jacobs didn’t want to break that mystique that Magic Mike’s Crew are doing this as an avocation. Fuck off! Those dollars are why they do it. Yet no one – Rome’s boys, Magic’s boys, other acts – is ever seen getting on their hands and knees, butts in the air, scooping up that cash ingloriously, like we regularly see female strippers doing, no matter how sensual she pretended to be or how classy her bottom was.

We only came to see Channing Tatum dance anyway. And it is teased in such small amounts that we’re suddenly at the end of the film with only three featured grinds (the last duet featuring a salubriously slithering Stephen Boss as his dancing partner). Tatum is by far the best dancer of the group, and it is truly stunning watching him perform. It’s the movie’s only plus. And his bottom really does look classy.