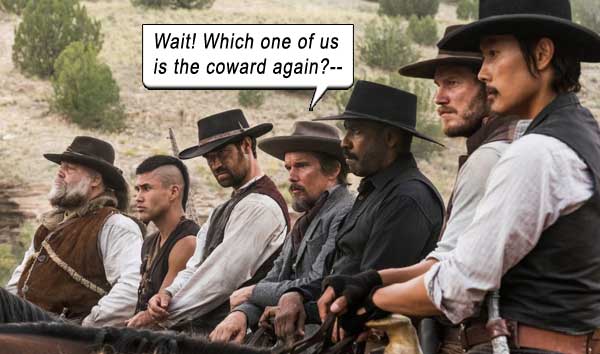 In THE MAGNIFICENT SEVEN, director Antoine Fuqua, praying at the altar of Kurosawa, Leone and Eastwood, crafts a majestic modern take on this paean to mythical heroes. Following the grand beats of its predecessors (Kurosawa’s SEVEN SAMURAI 1954, and Sturges’s THE MAGNIFICENT SEVEN 1960), we find a town terrorized by a villain, hiring seven mercenary outlaws to repel the evil, and offering “everything they have” in return. (“I’ve been offered a lot for my work – but never everything.” The same line from SEVEN 1960 draws a nostalgic tear…)

We open on a town hall meeting in the church of Rose Creek, the townsfolk arguing that the water is poisoned due to a land baron’s gold mining (a modern allusion to fracking). Matt Bomer in the audience (from MAGIC MIKE, looking like Superman about to strip down to his blue onesie), with young wife Emma Cullen (Haley Bennett). Then the heartless land baron Bartholomew Bogue (Peter Sarsgaard) strides in like a devil in spurred boots (love the name!). Bogue guns down townsfolk outside the church for defying his authority, including Bomer, prohibiting the sheriff retrieving the dead, and also precluding a table dance, “Leave the bodies where they lay. Let me look at ‘em a few days.” (Bomer: even in death, his butt be glistening…)

Bogue offers a pittance to the townsfolk to sell their land to him, doing so from the church pulpit, an optic not lost on us – the pollution of religion with capitalism. During this heretical act, and the subsequent cold-blooded murders, that dead-eyed look never leaves his face.

It’s so tragic how her husband was killed. Such a horrendous…uh, such a, such a…eh, tragedy…that should never… uh… wait, what was the question again?

A black man bedecked in black, on a jet black horse, rides into town, like the stranger in Leone’s westerns. Only blacker. This bounty hunter named Chisolm (Denzel) walks into a bar. Five dead guys later, he walks out with the information he wanted, and an acolyte – drunken gambler Faraday (Chris Pratt).

Outside the bar, Chisolm is accosted by Emma, who is seeking out just such principled saviors quick on the draw. Against his better judgment, Chisolm accepts. Only much later would we discover a possible motivation for this rootless man, as he is reminded of his murdered sister: “Emma must be the same age your sister would have been… Just making sure we’re fighting the battle in front of us, not behind us.” Excellent subtle dialogue that gives us a better motivation than Shimura in SAMURAI or Brynner in SEVEN 1960, who both kinda caved to just being nice to the villagers. Faraday tags along, because principled saviors attract other such saviors with sexy three-day growths and fine man-butts…

So begins the journey toward Rose Creek, picking up other lone warriors with past demons: Ethan Hawke as dandy Goodnight Robicheaux (we recall his subservient relationship with Denzel in TRAINING DAY), with his sidekick knifeman, Billy Rocks (South Korean-born Byung-hun Lee, visually drawing us closer to SAMURAI with his tanto, wakizashi and katanas); mountain man Jack Horne (Vincent D’Onofrio, entering like the bear from THE REVENANT, with an “old prospector” accent. We recall his history with Pratt in JURASSIC WORLD); on-the-run outlaw Vasquez (Manuel Garcia-Rulfo), and outcast Native American, Red Harvest (Tlingit Martin Sensmeier, who also appears on the new TV series WESTWORLD – meaning Sensmeier appears in two things that the great Yul Brynner was in). The casting could get no better on this film!

I love the “revisionism” of showing us the West being more variegated than white filmmakers portrayed it in the 50s and 60s. And again, I must stress: though movies like this and UNFORGIVEN et al are called “revisionist,” they are actually NOT “revising” (i.e. whitewashing); they are actually RESTORING the truth of diversity.

Denzel is Yul, that’s obvious, and Pratt is his McQueen. Hawke is Robert Vaughn, and I guess knife-wielding Byung is James Coburn. But the remaining characters can’t be matched one-for-one with their ancestors because this movie is a mashup of SAMURAI, SEVEN 1960 and Eastwood’s PALE RIDER (Bogue’s henchmen all wear matching beige trenchcoats for easy identification). The red herring subplot of SEVEN 1960 (Brad Dexter asking Yul if his motivation was hidden gold in the mountain) is now actually the plot, as Bogue is fracking for gold in them thar hills.

A strong woman in the lead role, Haley Bennett; no whimpering damsel, but a sharpshooter who “volunteered, insisted actually” on finding hired guns. Look up the definition of “disarmingly hot,” and there’s a picture of Bennett. You don’t look twice at first, slowly coming to the realization she is the New Jennifer Lawrence – younger, red-headier and green eyes-ier. She continues to wear off-the-shoulder dresses and push-up bras around seven rugged, warrior horndogs. I think mayhaps she wouldn’t mind if…? 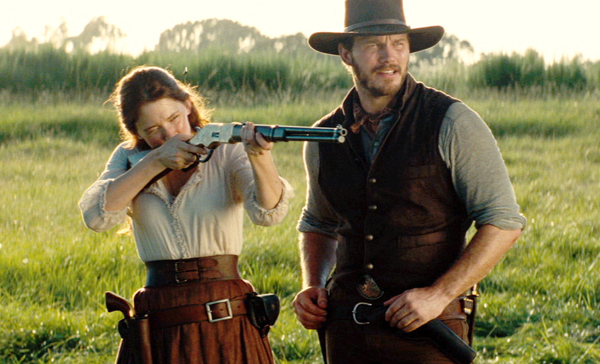 “Now that’s some mighty fine shootin,’ li’l lady! Why, I’d like to untie that severe bodice and let you shoot my magnificent pistol if you take a mind to it.”

We love the skill level in such hero movies: We see the ragtag team of seven cruise into Rose Creek and we know that even though Bogue’s deputies outnumber them, the deputies stand no chance. Chisolm holds his gun by the barrel in one hand, offering it to the deputies, “You sure you don’t want my gun?” We just know – like the deputies know – they are outmatched, simply from Chisolm’s commanding yet ominous tone. Before this first rock star battle, Chisolm tells his horse to move out of the way – because the shooting’s about to start; the brute strength of the mountain man, the agility of the knife-fighter, the lethality of the Comanche!… Only one deputy left alive to take a message: “You tell Bogue, if he wants the town, come see me.”

The seven educate the town in self-defense, ambush and strategy, setting trenches and traps and explosives. And hubristic Bogue walks into their trap… but he’s brought a Gatling gun…

The camaraderie is palpable between men of such skill, though the dynamic between these seven ronin differs from all other versions. When we see Robicheaux avoid killing any of the deputies, he tries to hide it, but Faraday is a joker and calls out Robicheaux’s “cowardice” publicly. But this is not the simple cowardice of Vaughn in SEVEN 1960; Robicheaux’s expertise is undulled, as he demonstrates his sharpshooter skill, so his reticence to kill is seen as PTSD. Yet he is faced with a damned-if-you-do/damned-if-you-don’t conundrum: Vowing off killing – even though it is regarded as honorable in this modern age – makes Robicheaux seem like a coward in the face of aggressors. So when he reneges on that vow and rides back in glory to kill the aggressors, is he doing the heroic thing? Or the cowardly thing in stooping to killing again? Is this his redemption or damnation?

Then again, from its noble beginnings in SAMURAI, this tale has always been about redemption being damnation. Takashi Shimura tells Daisuke Katô, at the end of SEVEN SAMURAI, “We’ve lost yet again; the farmers are the victors, not us….” Yul Brynner tells Steve McQueen, at the end of THE MAGNIFICENT SEVEN, “Only the farmers won. We lost, we’ll always lose.”

THE MAGNIFICENT SEVEN is a thrilling return to the classic western that people forgot how to make until Eastwood showed them how; a return to the mythic West where the hero’s aim is impeccable, his expertise unassailable, his manliness unstoppable.

And though there is glorification of violence during battle, the result of being heroic is bittersweet. Though there are inspiring sequences aplenty (one of the seven makes his hero ride through a hail of bullets to sacrifice himself – Hey, *I* want a hero’s death like that!), though there are movie conventions (the villain pleads for his life in a church, the hero refuses to shoot him, the villain pulls out a hidden gun – you know the rest); though we are shown a new Western reality (when only the minorities ride into the final sunset, are the filmmakers being daring or buckling to political correctness?), this MAGNIFICENT SEVEN retains the hard truth about those who live by the sword.

And if you don’t know what I speak of, my child, well, take the time to view the magnificent originals or never talk to me again.

Elmer’s glue.
I miss Elmer Bernstein. His orchestral score for the 1960 MAGNIFICENT SEVEN gave that film cohesion; it punctuated every mood sweep. In various permutations throughout the tale, it stirred us to excitement, suspense, triumph, adventure and hero worship, infusing the film with grandiosity from frame one!

The music here is by the late James Horner (co-credit, Simon Franglen, who must have completed the work after Horner’s death – ?), and though Horner is a true craftsman himself (especially noteworthy in films like BRAVEHEART, TITANIC and TROY), his soundtrack here cannot compete with the majesty of Bernstein. 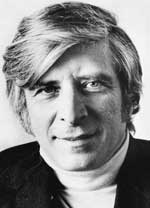 With Bernstein’s soundtrack so unstoppable, I really expected this movie to retain it, however, though there are rhythmic snatches that tease us, no candy until the very end, in a full-throated blast of magnificent Bernstein!