The Passion of The Heist. 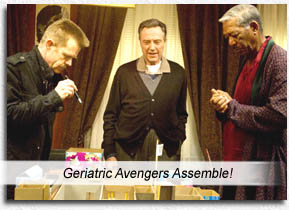 A quaint little heist comedy, with a nifty romantic resolution, THE MAIDEN HEIST stars Morgan Freeman, Christopher Walken and William H. Macy as security guards at a Boston art museum, so enamored with certain art pieces that when those pieces are sold to a European museum, they decide to steal the pieces for themselves and replace them with fakes.

Theft for love not money. Beauty is in the hands of the beholders.

There are layers to be discovered in THE MAIDEN HEIST that most people won’t take the time to tease out. Director Peter Hewitt and writer Michael LeSieur ambitiously recruit three of the greatest actors in the world to convey the levels of irrational passion that beholders of art are victim to. These guys can convey more in a raised eyebrow than most people can convey with a GLENGARRY monologue and a John Woo helicopter explosion combined.

Still, it seems like the film is one long exercise in comedic opportunities gone missing.

The slogan says, “They’re not bad guys. Just bad thieves.” But they pull off the heist with a minimum of farty slapstick. So they’re not really bad thieves, they’re just marketed that way. The real story is buried beneath the heist and its attendant farcical passages.

It is amusing just watching Walken Being Walken, as Roger the neurotic security guard, who has been guarding a painting called The Lonely Maiden for so long, it has become his surrogate love over his real wife (Marcia Gay Harden, who creates a devilishly spot-on Florida-bound retiree). No prizes for guessing that Roger realizes his love was right there all along – but this reveal is where the movie shines in its own subtle way.

If you blink, you’ll miss beige Breckin Meyer‘s two-minute cameo as a Starving Artist. Thankfully. Meanwhile, we can’t AVOID William H. Macy going Full Monty – at every opportunity, he poses nude before his favorite sculpture, The Bronze Warrior. (For an older guy, Macy is pretty taut and he himself admits this may be the last time he will have the opportunity to go bareback and still look good.) Morgan Freeman’s character is a little harder to pin down, as he moons over the painting Lady With Cats, ambiguously gay in all the subtle ways only a great actor can convey, without having to lisp ferociously.