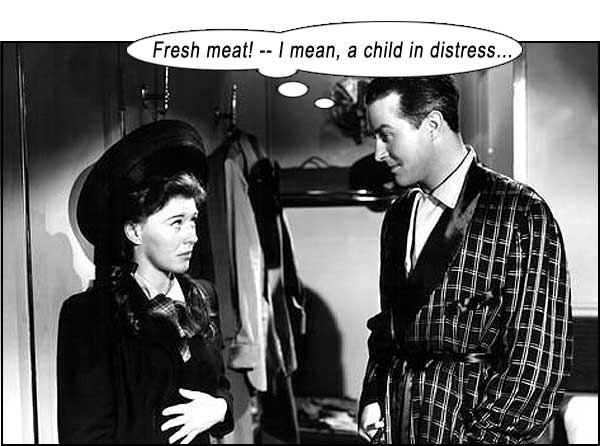 A grown woman poses as an 11-year-old girl to buy a half-fare train ticket. And everyone tries to fuck her.

THE MAJOR AND THE MINOR is a sex pervert’s dream date. It plays on the darkest impulses of humanity, while trying to couch those impulses in a “screwball comedy” thereby letting it off the hook.

Ginger Rogers (best known for her dancing stints alongside Fred Astaire) stars as Susan Applegate, a stunning redhead whom everyone eye-rapes as she sashays in a shape-hugging dress (with a pointy bra) into a middle-aged man’s apartment to give him a scalp treatment. Firstly, I don’t know why she’s dressed like the hookers of the day if she’s a scalp technician. No wonder this old guy grabs at her like a dog with an erection. She declares the session over, telling him she’s going straight to the train station, naming her destination, and then pulls out an envelope which she’s had “since she arrived in New York” containing her exact fare. (The script makes it clear there isn’t any other money to her name, besides what’s in the envelope. What about her severance pay? Is this a plot point that can only be understood in the days of exclusively paper money?)

The second thing I don’t get is: why is she telling this masher all her plans as he’s trying to rape her?! (The old perve is Robert Benchley, grandfather to Peter Benchley, the writer of Jaws.)

At the train station, the only money she has is not enough for the fare, so she disguises herself as an 11-year-old for the half-fare. (Her “disguise” includes rubbing off her makeup, putting her hair in pigtails, cutting up her dress in some magical montage and not wearing her pointy bra.) She asks a passing stranger to pose as her father and buy the ticket. All he can think of is the sexual price he wants to extract for this favor, but she kicks him in the shins and runs. I mean, what is the message of this prurient, stupid movie?!

On the train, the conductors peg her as a grown woman, so she hides out in a man’s berth. Just so happens that the man in the berth, Major Kirby (Ray Milland, when he was a young leading man!), has a gammy eye and don’t see too good. Oh, Plot Convenience Playhouse, thy merciful bitch! So he shelters her for the night – the first man NOT to come onto her in the movie, actually treating her like an 11-year-old. Is the movie saying that you have to have an infirmity to treat a woman with respect? That if you are a fully-functioning red-blooded male, it’s just natural to treat even an 11-year-old like a sex object? 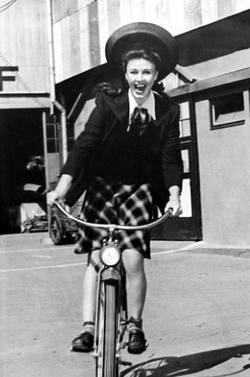 Every man’s fantasy: Ginger Rogers dressed as a schoolgirl!

Co-written and directed by Billy Wilder (his first directorial feature, soon to become a legend with SUNSET BOULEVARD, STALAG 17 and SOME LIKE IT HOT), written by Charles Brackett (presumably with his hand on his cock), THE MAJOR AND THE MINOR is a dichotomy of innuendo and blatant pedophilia. At first blush, we imagine that in those simpler times (WWII, when men protected the dignity of women) no one would look twice at Susan the youngster. But then the film wants to have it both ways by making every man around her behave like a rutting stag. It’s only the fact that WE know she’s a grown woman that makes the situations funny – but THEY don’t! In other words, every man in this movie is a child molester! Or maybe the filmmakers want to impart that Susan is so smokin’ hot that even in those schoolgirl duds, her femininity screams through? Uh… nope – child molesters.

Major Kirby gives Susan the pet name, Su-Su (which is too close to the demon Pazuzu from THE EXORCIST), and introduces her to his school of cadets – 300 boys “and they’re all yours” – who pant after her like baboons in heat.

Through a mixup, Kirby’s fiancé Pamela (Rita Johnson) thinks that Susan is a slut that Kirby picked up, so Kirby must introduce Susan to the school board members while they are in desperate session figuring out how to expel him. When they discover Susan is but an “11-year-old” and needs a place to stay, the priest’s reaction is gold (considering what we now know about priests), offering to take her for the weekend. Of COURSE he does…

Unfortunately for Father Pedo, Susan rooms with Kirby’s fiancé and her sister, Lucy (Diana Lynn, so young she looks like a toddler, who would also star in the remake of this movie thirteen years later as the love interest to Dean Martin).

YOU’RE NEVER TOO YOUNG is the Dean Martin/Jerry Lewis remake of this film, handling the misperception of an old person as a youngster in a less distracting way – because the youngster is a boy (Jerry Lewis). I think in both movies, only the priest’s reaction would be the same. 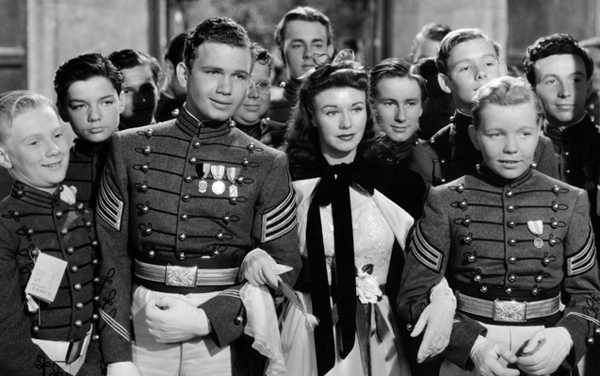 This scene led to the film’s alternate title: BUCKETS OF SPERM.

Ginger Rogers manages to squeeze some dancing in, with some excellent tap to tempt a savage beast (i.e. a cadet).

And if we think Major Kirby is a faultless gentleman, by the time all the cadets are pulling Susan this way and that to be her waltz partner at the big dance, even Kirby is eyeing her inappropriately! Not “rescuing” her from all the swinging dicks, but cutting in to get his own freak on, rubbing up against her 11-year-old body like a pervert. He even looks at her closely and says, “Why, you’re a knockout!” And later, while his fiancé talks to him distractedly, he casts his admiring gaze over Susan dancing with the bukkake boys. What is meant to be happening here? Is this grown man “falling in love” with an 11-year-old? Is he planning to accost her in 8 years?

Susan flees eventually, after being discovered by Kirby’s fiancé – and Kirby, who still believes she’s 11, tracks her to her home! What’s the matter with you, man?! Do we need to remind you of the jail time for statutory rape?! On the pretense of bringing Susan a parting gift from Lucy, he visits her “mother” – which is Susan actually dressed as her mother, telling him Susan is not home.

All the time she was with the Major, Susan wanted to jump his bones, but not only did he have a fiancé, Susan had to continue her ruse. (At the cadet school, there was really no need to continue the ruse anyway!) When Susan tried to meet the Major as herself at the school, she was told off by the fiancé. Now, she’s trying to discern from him whether he is, in fact, attracted to an 11-year-old girl over his fiancé, in order to make her ultimate decision to meet him at the train station before he boards the train out of her life forever.

Presumably, she DOES get the whiff of child-molester off him, which is why she puts on her big boy clothes and presents herself at the station. He recognizes her and they run off into the night, because by now, his erection is almost breaking off in his pants.

imdb
Word Count: 1,400      No. 1,344
You might recognize Diana Lynn from her appearances alongside Martin and Lewis in MY FRIEND IRMA and MY FRIEND IRMA GOES WEST, as well as this movie’s remake, YOU’RE NEVER TOO YOUNG; she was also an accomplished pianist.