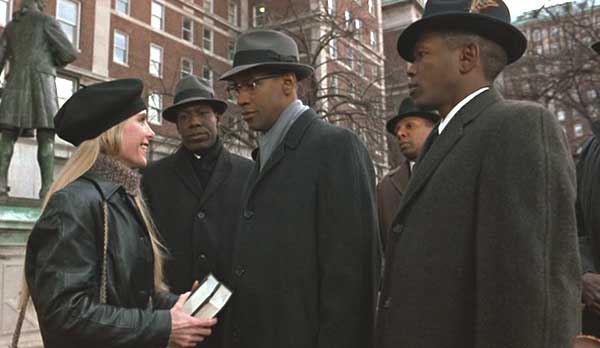 Every woman’s fantasy: Surrounded by black men who hate white people,
about to racially rage-bang her.

Malcolm in the Shizzle.

Denzel Washington is Malcolm Little (whom everyone calls “Red” for his conked red hair), a petty thief, cocaine addict, prostitute peddler, dynamite swing dancer, and all-round small-time gangsta before the term was invented. During the World War II Years, Malcolm falls in with West Indian Archie (Delroy Lindo), plying his trade in Boston and New York, eventually being busted with his long-time friend and accomplice, Shorty (Spike Lee) and sent to jail. 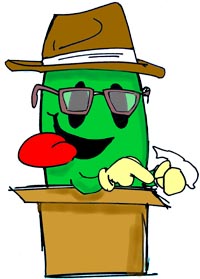 In jail, about the time that Jackie Robinson made the major leagues in baseball, Malcolm Little becomes Malcolm X, to shuck off his “slave name.” So begins the rise to power of one of America’s great black leaders. But it is in jail that the movie MALCOLM X falters, as Malcolm’s criminal outlook on life flip-flops to that of Islam, schooled by a pushy, annoying, racist fellow convict, Baines (Albert Hall). Baines’s throat-clogging, anti-white rhetoric – for the sake of this movie – is compressed and unrelenting, and so choked with religious hypocrisy that it succeeds too well in making me want to fire-bomb a church and become a racist against black men like Baines.

Malcolm leaves prison as one of Islam’s greatest exponents, an articulate, intelligent, outspoken community leader, preaching fire and damnation against the White Man, causing so much civil discomfort (even whilst awakening the self-respect of the black community) that it leads to his assassination by the Nation of Islam.

Proving my point about religious hypocrisy.

As I write this in 2009, there are “two” Americas – pre-Obama and post-Obama. Films like MALCOLM X inspired people towards equality and created righteous outrage. However, in a post-Obama world, though the struggle for equality may not be over, that outrage has been somewhat diluted. The Dream has been realized – where else is there to go for the Black Man? Yes, there will be racism – always. The human animal is built that way. But what more can be done or said than achieving the highest post in the world?

X opens with a burning American flag – power to the peeps an’ all dat – but if you burn a flag NOW, isn’t that just disrespect to the Black Man? Who happens to also be THE Man?

Spike Lee directs MALCOLM X from The Autobiography of Malcolm X, as told to Alex Haley. Though it is not director Lee’s fault, Malcolm’s messages were garbled in religious hypocrisy and overt racism, and the messenger himself precluded this movie becoming an epic due to his small-mindedness; due to not being King:

He called the Kennedy assassination “justice… the chickens coming home to roost,” saying it didn’t make him sad, but glad. He called for “complete separation between the black race and the white race” and subscribed to juvenile mythologies like the Tribe of Shabazz, an ancient race of black kings and queens from whom the Caucasian race descended. (Nowhere nearly as sensible as the Tribe of David where an olive-skinned virgin gave birth to Jesus the Magic Caucasian and started a white race of Christians even though he was a Jew…)

Malcolm preaches, “The Honorable Elijah Muhammad teaches us the white man is the devil.” He doesn’t say “some white men” – he says ALL white men. These are the lessons he learns from that idiot bigot Baines in jail. (I call him an idiot because religious fanaticism is a form of idiocy.)

You could play a drinking game to this movie, on every time Malcolm X says, “The Honorable Elijah Muhammad” and by the end of the movie, you’ll be drunk enough to convert to the Nation of Islam. 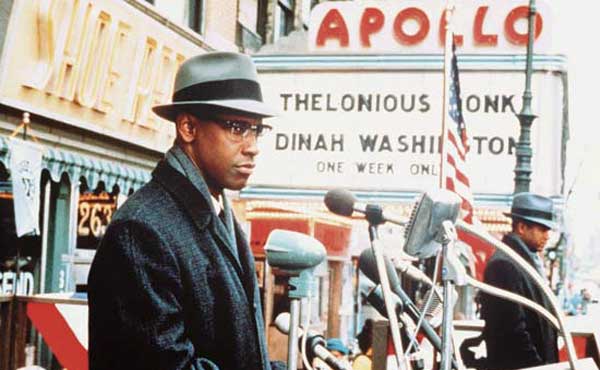 Malcolm X was a fiery political leader – Denzel’s sexuality and charisma are tuned to breaking point on the podium, a perfect role for a perfect black panther – but it’s unfortunate he had to resort to the crutch of religion to unite people. After he splits with the Honorabl–yeh, that guy–he has to maintain that his words are now not the Honora– geez, there’s no escaping this guy– and that his words are his own. Why couldn’t he do that from the start? Was Malcolm that weak-minded he needed to lean on the platitudes of a philandering old goat to unite people under a false aegis?

Malcolm also confesses he shouldn’t have made sweeping indictments of white people. And all it took was a trip to Mecca. Just when we think he is awakening from the ignorant slumber of religion, he uses one superstition to blanket another superstition. The mind being opened to other peoples off America’s shores is so impactful, everyone attributes a mystical epiphany to the travel, calling it a “pilgrimage.” But where’s the nearest Pizza Hut?

Angela Bassett plays Malcolm’s spirit-filled wife with every bit of hypocrisy that women of every religious stripe exhibit – starting out loving and obedient; after their marriage and kids, whining like a gold-digger about all the other leaders having fancy cars and houses while they live in squalor, thinking that marrying the famous X would have brought her glam. Religion’s a bitch, ain’t it?

Spike Lee’s movie-making is stupendous, Denzel’s performance, electric. Malcolm X was charisma and brimstone and an inspiration for the black movement. But his message of Islam was plain stupid. I don’t take away from the man – he is greater than I will ever be – but the delusion of religion obfuscated his underlying messages and this movie is shot through the prism of Malcolm’s religious journey, which weakens the movie.

Malcolm X was assassinated on February 21, 1965, in Manhattan’s Audobon Ballroom, by the same faction who called him a religious hypocrite for defecting from them – the Nation of Islam. (Which only proves that brimstone religion will Sodom you in the end.) Need I say more about religious hypocrisy, the godlike manner in which they dispatched Malcolm X, or the Honorable Elijah Muhammad?