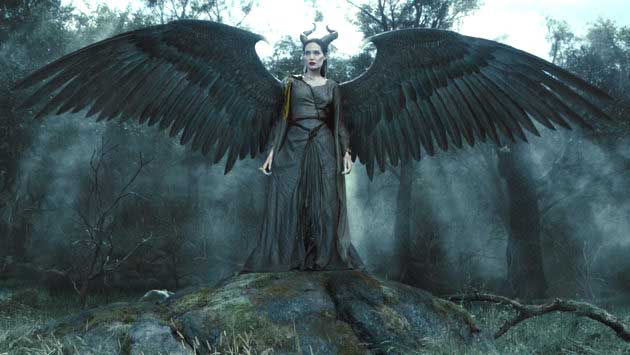 MALEFICENT is the story of Sleeping Beauty. Told from the point of view of the evil fairy. And you know what? She’s not evil.

First of all, I think this movie is trying to hurt our corneas. Does the CGI have to cover every single color in the visible light and ultraviolent spectrum so loudly? Secondly, magic. End of cred. Fuck you audience, we’re gonna do whatever we want whenever we want and none of it has to make sense even within its own story.

We meet Maleficent as a young girl (Isobelle Molloy), a good fairy with magic powers – and gargantuan condor wings, and two curlicued horns emanating from her skull, that makes her resemble the christian version of the horned devil. Young Maleficent spends her days whizzing around like a nonce amongst the screaming colors of the forest-swamp. One day she meets a human orphan boy named Stefan (Michael Higgins). We discover her kryptonite: “iron burns fairies,” so he throws away his ring, instead of sensibly putting it into his pocket. They will start a Friend Zone relationship that will last until they grow to adulthood as Angelina Jolie and Sharlto Copley. Never getting past first base is probably the reason the repressed Stefan one day chops off Maleficent’s wings to please his king, which could have been avoided with one little bang…

The king (Kenneth Cranham) is a doddering fool anyway – trying to invade Maleficent’s swamp for no good reason. What resources does it hold that his kingdom might want? What is his army planning on carrying off as booty? Or do they need lebensraum? Or are the swamp creatures attacking his land and he wants to turn them back? None of the above. No reason. No motivation. CGI battle ensues, with Maleficent leading an army of tree creatures and grass dragons and beating her wings until someone jizzes in their pants in the dark theater.

Later, when Mal magically builds an impenetrable wall of thorns around the swamp in a few minutes, we wonder why she didn’t do that in the first place instead of engaging in battle and putting all the lives of her precious woodland creatures at stake. Magic. Fuck you.

King  is obsessed with bringing down Maleficent. Why? What ideology is Maleficent promoting that needs to be stultified? None. What type of government is she running that needs to be dismantled? None. Is she in any way even worth a second thought, living way over there in the swamp while King lives out his life in his castle? Is there any reason that their paths will ever cross? None. Yet. Here we are engaged in conflict. Just because. 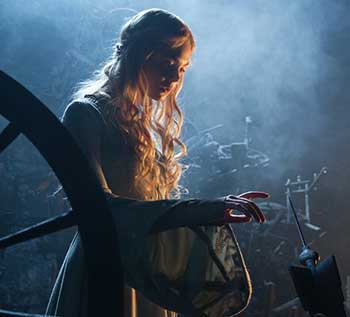 Why do people regard fairy tales as quality storytelling? The old yarns we grew up with were anything but quality – muddled, contradictory, motivation-less amoral plots with unformed characters that change personalities on a dime. And every fairy tale we think we know has been bastardized into a slick Westernized version of its European cracked vision (by Grimm, Anderson, Disney, et al). When we eventually read the full original tales, we realize they are twisted horror tragedies that no person in their right mind would narrate to their kids at “bedtime” – unless they want their kids to run screaming into traffic from the nightmares.

To elevate his position in the kingdom, Stefan rufies Maleficent and intends to kill her, but instead just cuts off her wings. (Is this a reverse castration metaphor? If he’s that repressed, why didn’t he just use her unconscious-time to get to that third base he’s been craving for decades?)

Stefan becomes king himself and his queen births a daughter. For revenge, Maleficent crashes the christening and puts a curse on baby Aurora: that she will prick herself on a spindle before her 16th birthday and fall into a deep sleep, that can only be awakened by True Love’s kiss. Sounds sensible to me: her revenge is going to take 16 years, not counting the nine months she waited for Stefan’s baby to be born. What’s the rush?

Next sensible plot point is King Stefan burning all the spindles in the land, and entrusting Aurora’s upbringing to three slightly retarded fairies who take her into hiding.

Is this a re-imagining or a re-dumbing down?

So let’s recap: THEY came after Maleficent’s greenery. THEY tried to kill her. THEY cut off her wings. So she can be forgiven in wanting to lash out at her antagonists. But when she is shown striding towards the baby, why are we getting the impression she is “evil”? I’ll tell you why: Because we’ve been indoctrinated with these tropes since medieval times; we are remembering the motivation-less fairy who would curse a baby for no reason at all, just to be the villain of a pointless tale.

Maleficent inadvertently grows to love Aurora as she grows, and teen Aurora (magnificent Elle Fanning, who is unfortunately directed to be in a constant state of imbecilic wonderment or a Vicodin-high over the woodland creatures), regularly visits the forest and hangs with Maleficent, frolicking with the special effects that are trying to beat us into submission. 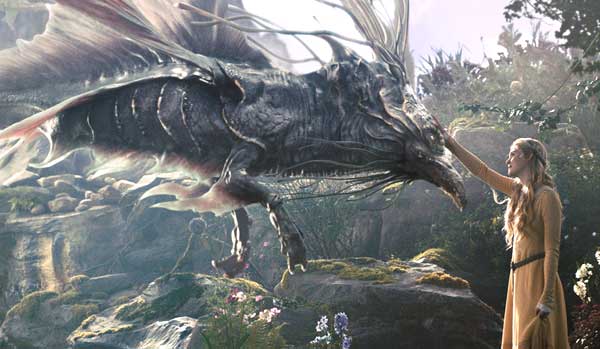 Jesus Christ! These drugs are better than the ones Judy Garland used on THE WIZARD OF OZ!

Maleficent puts Prince Hunky to sleep on his horse, then “she needs a horse” to ride alongside Prince’s horse to the castle, so she turns Crow into a horse. When they arrive, she dismounts and magically floats the Prince along behind her. Is ANYONE registering this idiocy?! If she could float him, why did she need two horses?

Movie is filled brim to barrel-bottom with contradictory, paradoxical, lunatic magic that works only when it needs to and is forgotten when the plot calls for adversity. Maleficent can do literally anything with her magic, except the most judicious thing when it’s called for.

There is one great twist to the tale. Prince Lunkhead kisses Aurora when she is out cold and nothing happens. For it is Maleficent who truly loves Aurora – and inadvertently wakes her with True Love’s kiss. [insert wocka-chicka music]

Besides being literally unwatchable – the effects are just too effect-y – like all great fairy tales, there is a horrifying passage that is much more disturbing than people will admit: Maleficent’s disembodied wings are in a glass case in the castle, and they flutter in there of their own accord. Eeeuw! The glass case is broken and they fly to her – meaning they have their own sensory perception – and simply attach themselves. That was all it took? Why didn’t she use her magic and walk right in and TAKE them all these years? She turned her crow into a dragon fer chrissakes! She couldn’t turn an army of chipmunks into dragons to go get her wings?

And what is it with all these necrophiliac princes that keep kissing sleeping chicks who look like they’re dead?

One can see this narrative developing from a repressed peasant who just wanted a princess to lie still for a few minutes so he could have his way with her, as he imagines the power of Rohypnol before it was invented. Or maybe there was something of the nature of “rufies” sold on the black market by the village doctor/quack, who still thought the best way to cure an upset stomach was bleeding the patient with leeches. Either way, is it so hard to see the male storyteller mind at work, forging a story where a girl keeps her mouth shut while in a supine position? 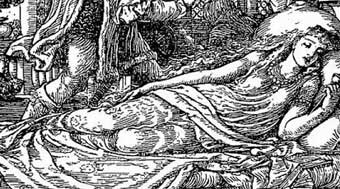