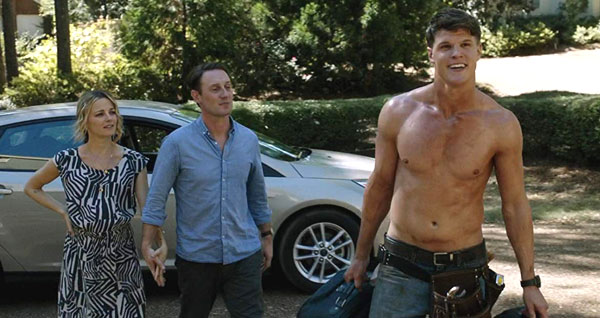 After a miscarriage, a woman and her husband have visions of that dead baby daughter, who appears to them at various ages, with malicious intent.

MALICIOUS follows young couple Adam (blank-faced Josh Stewart) and heavily-pregnant Lisa (glorious Bojana Novakovic) as they move into their new home in the country (capacious and multi-storied, with a lack of electricity at the most inopportune times – perfect for hauntings and jumpscares), where an enigmatic puzzle-box unleashes a spirit that possesses Lisa’s unborn baby, causing it to die… yet the spirit of the baby continues to appear to Lisa and Adam, at various ages – as a gurgling baby, a teen, a sexy woman or an old hag – which makes me wonder why the malicious spirit killed the unborn baby it had just possessed, and also how the process of aging works along other timelines simultaneously? I guess these old wives’ tales really don’t think through their string-theory physics…

As per the title, the unborn baby’s various forms are – malicious. I always wonder at the logic behind ghost stories where ghosts/spirits/demons aim to kill human protagonists. Because in a universe where the spirit world exists, couldn’t the killed humans now enact revenge on the evil spirits who killed them when they themselves become spirits, imbued with all the ectoplasmic magical powers that the evil spirits possess? Or, in being killed by evil spirits, do the humans also become “evil” spirits for no logical reason, bonding with their killers? Are evil spirits just Lonely Guys looking for a bro? I guess these old wives’ tales really don’t think through their astro-dimensional criminal psychoses…

In the opening scene, as Adam and Lisa drive to their new home, I couldn’t tell whether she was his wife or daughter – strange miscasting. Beautiful Novakovic once looked like Parker Posey, but now she looks like God finished creating Helen Hunt in perfectamundo, while the bland, expressionless Stewart looks like an unfinished version of Sean Penn – in looks and acting. The slut sister is Becky (Melissa Bolona, all Botox and breast augs, who looks like they scrapped this version of Angelina Jolie and started again); there’s even a gardener/student (Ben VanderMey) who looks like an unfinished Matt Damon!

Director-Writer Michael Winnick creates atmosphere for this Netflix film by contriving ways to end up in the dark, with flashlights and scraping violins, and scenes that make zero sense: Adam sees Becky having slut sex with the gardener, then she is suddenly behind him, as he realizes he saw a vision, not the real thing – uh, why?; the spirit baby coos in its crib, until someone picks it up, then its face gets contorted in evil – uh, why?; the old trope of the evil spirit as a young woman entering shower with Adam, then turning into old hag – uh, why? It’s like the spirit just loves to punk people. So there’s a high chance it may be Ashton Kutcher. I mean, he’s evil and lives in a box, no?

THE SHINING is paid homage in aerial traveling shots of a car winding between trees on a deserted road, the evocative costuming of the spirit girls, the woman entering the shower and aging for erectile dysfunction; even the movie poster resembles the twins outside the hotel door.

For answers, Adam and Lisa visit a man named James (Luke Edwards), in jail for killing his wife, who was possessed by the same box. And James looks like a para-Billy Crudup! Which casting agency was hired for this movie – Lookalikes R Us? James presents them with a morbid conundrum – kill Lisa to stop the malicious spirit, before she starts caring for it as if it was her actual baby…

A not-frightening cliché with a nonetheless satisfying ending, which might have garnered some real cinematic clout if only it starred Sean Penn, Helen Hunt, Matt Damon, Angelina Jolie and Billy Crudup, with Delroy Lindo guest-starring as Delroy Lindo.