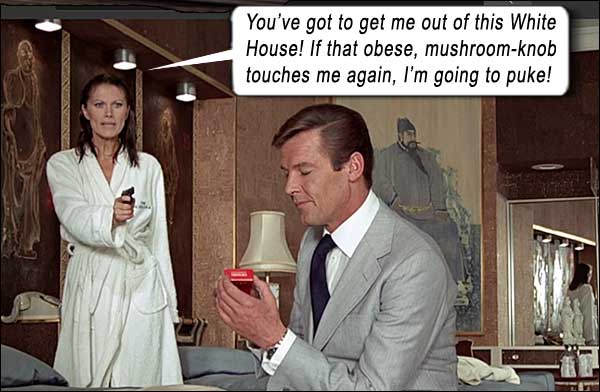 Roger Moore slams into his second thrilling James Bond 007 actioner, THE MAN WITH THE GOLDEN GUN (from the 12th Bond novel by Ian Fleming, publ. 1965), targeted by the world’s most expensive hitman, who is plotting to hold the world hostage to the golden sun.

Cold open on the million-dollar hitman, Scaramanga. (Christopher Lee, COUNT DRACULA), shirtless on his private island, his woman Andrea (Maud Adams) spending lots of face time near his thigh, while his mini-manservant brings champagne, Nick Nack (midget Hervé Villechaize, soon to be immortalized as Tattoo on FANTASY ISLAND, 1977). We notice Scaramanga’s oomph Bond gimmick – 3 nipples! This icky anomaly will feature later in the story, and will prove to be the hands-down, tits-up most irrelevant plot point in any feature film of this decade.

Nick Nack, with his suave French accent, shows a henchman into Scaramanga’s funhouse – a labyrinth with gun-toting mannequins, false staircases, infinity mirrors and deadly dead-ends, which Nick Nack manipulates from a control room. Scaramanga enters his own funhouse as a contestant, trying to ambush the henchman; it’s an agreement that if Nick Nack can get Scaramanga killed in the funhouse, he will inherit Scaramanga’s empire.

After he makes mincemeat of the henchman with his golden gun, Scaramanga shoots at his realistic James Bond mannequin! (Not a bad effect – it’s actually Roger Moore painted to look plastic!)

Lulu merrily chirps the opening titles, The Man With The Golden Gun. 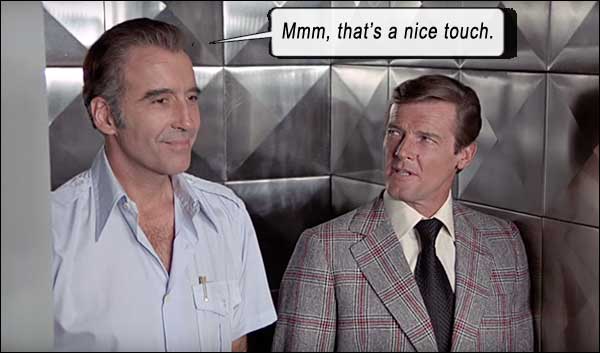 Agent 002 has been murdered, but MI6 can’t establish it was Scaramanga. No bullet remains, and no one knows what Scaramanga looks like. Now Scaramanga has sent MI6 a golden bullet with “007” etched on it, so M (Bernard Lee) instructs Bond not to pursue Scaramanga in the face of this naked threat. Moneypenny (Lois Maxwell) doesn’t seem too concerned either way, as long as James innuendos that he’s going to bang her someday.

Speaking of naked, Bond visits 002’s sleazy murder site – and finds the crushed golden bullet that killed him as a belly ornament on a belly dancer. He swallows it while 3 henchmen try to beat him up for no reason.

Q (Desmond Llewelyn) can’t identify the unique bullet, not even with the help of another British toff, so they point him to a weapon maker in Macau who might. Bond tortures the weapon guy for Scaramanga’s info. This leads to Andrea, the brown-haired beauty who dried Scaramanga’s thighs, Bond accosting her in the shower and beating her for information.

Bond has always tortured people (seems to be an acceptable method of gaining information – that’s why war criminal Dick Cheney got away with his felonies, and is still free – somebody DO something about that, please!), but in GOLDEN GUN he really comes off as savage; probably the changing times and filmic attitudes, censors allowing filmmakers to portray more brutality. And in these more permissible ‘70s, look carefully, boys, at the opening credits, and Maud in the shower – there’s a lot more feast for the eagle-eyed schoolboy than there was in Connery’s 60’s era (I’m talking bush, crack and nip!) 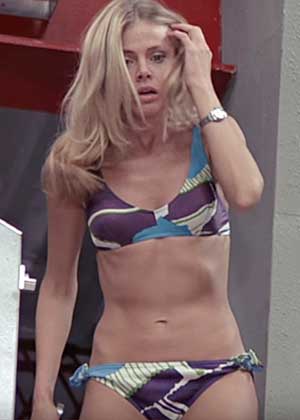 Britt Ekland: the Kelly Ripa of the 70s,
only not repulsive.

I am slightly amazed that GOLDEN GUN is produced by the same team that brought us the campy, plothole-delirious DIAMONDS ARE FOREVER that left Sean Connery eating kitsch (writers Richard Maibaum, Tom Mankiewicz and director Guy Hamilton). The storytelling actually makes sense: Bond is tracking a guy to get to another, then piggybacking off that contact to get closer to Scaramanga. There are no non-sequitur sequences that we wonder whether we should remember as part of the plot, that prove to be completely irrelevant later. (Well, there’s one – the karate school…)

Maud Adams is a good-looking version of Dumbo Donald’s Melania. When Bond bends her arm backward, she whimpers, “He’ll kill me if I talk!” He bends her arm just a tiny bit more – she talks. So that whole excuse about getting killed, well – not that serious, I guess. (Reminds me of that Connery GOLDFINGER scene: “Do you exshpect me to talk?” and then… talking.)

Again there is subterfuge to bring Bond to his own agency – Asian agent Hip (Soon-Tek Oh – an Asian That Guy) pretends to be Hong Kong police and arrests Bond, for a shooting in the street right next to Bond. In keeping with the beautiful, colorful locations, the MI6 base is in a tipped-sideways abandoned tanker in the bay, where Bond updates M, with Q at last taking part in the big boys’ conversation.

Britt Ekland is Agent Goodnight (of course she is), a blond spinner who plays hard-to-get with James by taking her panties off on their first night together. Making Bond get to hard. Before they can bond – Andrea knocks, Bond pushes Goodnight into the closet and the poor girl can only listen as Bond flays Andrea for Queen and Country.

Ekland and Lee are coming off a 1973 film where Britt was actually sexier and Christopher was actually campier – the disturbing thriller THE WICKER MAN.

And now to that non-sequitur sequence, which is a squandered opportunity to elevate this B-movie into a legit combat film. Bond is captured and sent to a karate school to be killed, I guess the idea being that the students would beat him to death. Who knows? But Bond uses his white man mojo on these black-belted fools and kicks their asses. It’s obvious this segment was cashing in on the karate frenzy sweeping the world, with the emergence of Bruce Lee (FIST OF FURY, THE WAY OF THE DRAGON, both 1972), but instead of creative lightning-strike karate, the embarrassing fights are just slow and white.

There’s a modern movement by Mixed Martial Arts fighters to expose traditional martial arts as fake, or at least ineffective, in actual street brawls. And this movie, way back when martial arts were held in highest regard, seemed to be saying exactly what modern fighters are claiming – martial arts is for gullible bitches, if a paleface can take you down with Spock Chops. 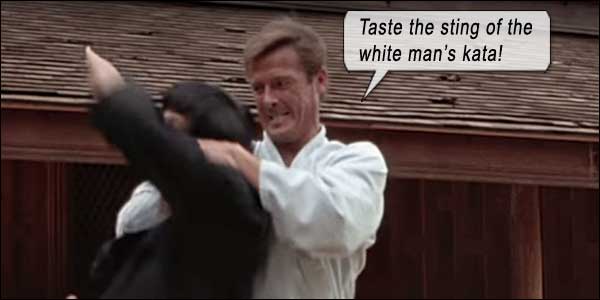 Okay, so maybe they didn’t want to suddenly imbue James Bond with karate skills, but then Hip brings his two kung fu nieces, and they push Bond aside and wade in – so now it’s a battle between equally talented factions, the nieces vs. the students. And again, what could have been a well-choreographed karate ragnarok, showcasing the grace and thunder of this ancient art, ends up as air-punching, pained faces and Three Stooges pratfalls. More like mixed partial farts.

Not even gonna mention the hoops they had to jump through to land Bond in that dogi; it involved trying to fool a Chinese mobster with his fake third nipple. At this point, the screenplay was just up against a wall being gang-raped by screenwriters Maibaum and Mankiewicz. And the message of this sidetrack sequence: racism wins.

To drive home that point – Sheriff J.W. Pepper (Clifton James)! Yes, the redneck lawman from LIVE AND LET DIE is somehow in China on vacation. And after a silly scene where Hip simply drives off before Bond can enter the getaway car, Bond procures a makeshift speedboat (homage to LALD), and Pepper sees him cruise by, overcome with PTSD hot flashes. Before long, the iffy screenwriting lands them in the same stolen car, Bond driving…

… into one of the greatest practical stunts ever performed – the corkscrew bridge jump. And they had to go ruin its impact by cueing a slide-whistle under the stunt! Even director Hamilton and composer John Barry admit they were blithering idiots for doing so, and wish they could take it back. Still, if it were done today, there’d probably be 4 different angles and 12 different cuts (if those idiots Olivier Megaton or McG were directing). The first and only take, this one uncut master shot is pure gold!

And now… back to THE MAN WITH THE GOLDEN GUN. Scaramanga kills Andrea, reveals himself to Bond and kidnaps Goodnight; turns his car into a plane and escapes.

When M hears of the mess, he goes apeshit like an 80’s cop movie, “…this half-witted operation!”

Bond follows Goodnight’s homing beacon to Scara’s island, and we empathize with Scaramanga’s reasons for not quickly killing Bond. Scaramanga considers Bond a fellow assassin, “Ours is the loneliest profession,” and we can feel this psychopath’s need for approbation from a peer whom he respects. He gives Bond a tour of the island, and for once, we don’t feel like it’s gratuitous, because Lee, veteran that he is, is playing Scaramanga’s loneliness so well. There is a subplot of a “solar cell” connected to a reflective dish that concentrates the might of the sun into a power beam (another machine that can be called Goldeneye!). This machine – is his real “golden gun.” Scaramanga shows Bond the cell (a McGuffin that Bond must steal for the climax) and outlines his plan to sell solar energy to the world. (Actually, that’s a good thing, no? Scaramanga was an environmentalist!)

Goodnight joins them for dinner in a skimpy bikini. “I like a girl in a bikini. No concealed weapons.” Yeh, that, and a whole buncha other reasons.

Narcissist Scaramanga wants “a duel against titans” with Bond; the golden gun against Bond’s Walther PPK. “We are the best! The only true test for gentlemen!” On the beach, Nick Nack counts their 20 paces, but when Bond turns, Scaramanga is nowhere to be seen. Into the funhouse…

Almost an anti-climax, as Bond quickly dispenses with Scaramanga through a ploy of posing as his own mannequin. With the main villain gone, the ensuing retrieval of the solar cell and explosions of Castle Fu Manchu seem superfluous. With the obligatory Final Sex Onboard A Water Craft interrupted by Tattoo.