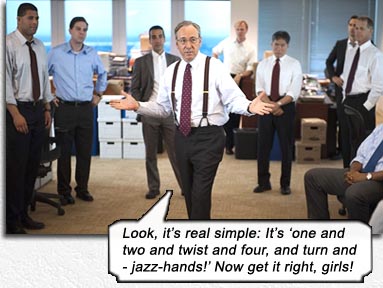 Beautifully staged, excellently performed and brilliantly explained, J.C. Chandor‘s conference-table thriller is about the financial crash of 2008, and the 700 billion dollar American bailout that followed. But nowhere does MARGIN CALL give us a date, place or corporation name; it shows us AnyCompany, Inc., populated by AnySharks dealing with EveryOne’s money. It is a story of what might have happened at the desk of Any Given Analyst when he first discovered that the unethical practices that his firm was ensconced in were about to turn around and bite the world in the arse.

Firstly, one would imagine a talky drama about stock derivatives and market capitalization and risk profiles would drive us to power-hibernation; secondly, that if we marginally understood what the hell everyone was talking about, that we would get up out of our chairs, go to the window and stick our heads out and yell, “I’m as mad as hell and I’m not going to take this anymore!” … but the marvel of Chandor’s movie is that it is entirely understandable to peasants like you and I, without stooping to didactic dialogue or inauthentic explanatory lines; and in understanding the slimy practices that led to the economic collapse, we realize how futile it would be to stick our heads out windows.

You can see the bad guys clearly and how they did it. I don’t know much about high finance – all this talk about derivatives and credit default swaps leaves me hanging – but finally I could see the basic fact of what happened at Lehman Bros. and all the rest… I could see clearly in this movie – as American as HIGH NOON – the evil that came into being here… You can see it all, you learn what it looks like, you get the full glamorous look, the ‘this-will-only-hurt-for-a-minute’ wild depravity of decisions that brought this country down to its knees; you see what the bad guys know, what they really are for the first time, and what they did to us.
— Chris Matthews, MSNBC political commentator.

MARGIN CALL is filled with actors I admire: Stanley Tucci is an analyst who discovers the downward trend and is sacked from the firm during a routine downsizing before he can confirm the numbers (love The Tucci! Can anyone say “underplaying”?); Paul Bettany is Tucci’s boss, also brilliantly underplaying (love Bettany, eternally J.A.R.V.I.S., Iron Man’s computer); Jeremy Irons in a stolid performance as the big kahuna who can see trends a month in advance (love Irons! His imperious jawline might even be squarer than Demi Moore’s); and Kevin Spacey just easing into a role that has become infused with his bloodstream, Office Manager Incarnate (love Spacey! The dead delivery works so well in this milieu of shark-teeth and blood money). So much man-love to go around, I’m also beginning to love Zachary Quinto (eternally young Spock) after this role, as a gifted analyst who explains the predicament to the big bosses; he also co-produced. Simon Baker (THE MENTALIST) doesn’t bring any pre-love to this movie for me, but he does a stunning job as Spacey’s boss, and his hair is magnificently frosted.

Man-jawed Demi Moore and DAILY SHOW’s Aasif Mandvi (playing it as serious as a bailout) are two senior number crunchers, and young Penn Badgely holds his own against all the seasoned veterans, naturalistic actors and square jaws.

As Chris Matthews explained, we get to see one of those meetings that might have transpired, when decisions were made to sell off stocks that were worth nothing. I presume we have not yet reached the juncture where the same firm that sold the bad stocks into the marketplace (to avoid being stuck with them when they failed) then started betting on those stocks to fail, in order to make back the money they lost on the sale of them.

Calling these people low swine is an insult to pigs.

It is portrayed (as it might be in real life) that each person in the firm admittedly doesn’t really know what their underlings do. Bettany doesn’t know what Quinto does, Spacey says, “You know I can’t read these things – tell me in English,” and Irons, at the top of the food chain, worth a billion dollars, asks Quinto, “Maybe you can tell me what’s going on, and please, speak as you might to a young child or a golden retriever.”

His mantra on making millions is “Be first, be smarter, or cheat.” And with all he’s just said, we get the impression he’s really sweet on that third bit. 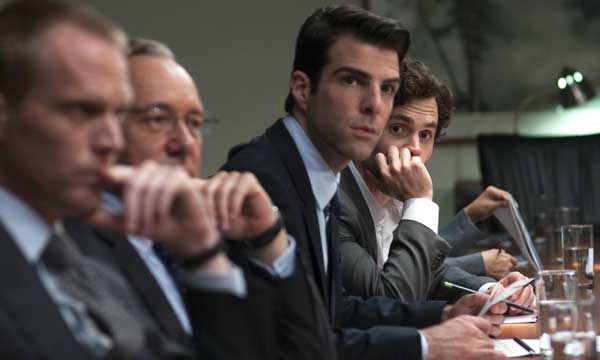 The ruthlessness of the firm and its practices is displayed in the way they treat their employees, down to the way they offhandedly swear at each other and speak AT each other, rather than with each other. A favorite rejoinder of all the top brass, when one of them asks the other, “Do you understand the implications?” is “Do you?” Or when someone says, “I understand the implications,” the question comes back with a different emphasis, “Do you?”

Imagine what it must have felt like to be the first to realize that your firm’s “projected losses are greater than the current value of the company”; that the sharks were about to start eating their own shit. These analysts were looking at the Crash onscreen, in numbers that didn’t add up. Once the losses start staggering in one direction, they could not be stopped. Did they feel that hot flush? That flop sweat? That sudden glut of seeing the police cruiser’s lights in a rearview mirror? Only seven-hundred billion times worse.

The way these risk takers rationalize is bluntly poetic. Bettany simultaneously castigates and elucidates the way of the world: “If you really want to do this you have to believe you are necessary. People want to live like this – with their cars and their big fucking houses that they can’t even pay for – then you’re necessary. The only reason they can continue living like kings is that we’ve got our fingers on the scales in their favor. I take my hand off, and then the whole world gets really fucking fair really fucking quickly and nobody actually wants that. They say they do but they don’t. They want what we have to give them, but they also want to play innocent and pretend they have no idea where it comes from. That’s more hypocrisy than I’m willing to swallow, so fuck ’em.”

And in the darkest chamber of your heart, you know he’s right. We all want at least the opportunity to one day be a shark, with someone behind the scenes tipping the scales in our favor. That’s why, despite all the exposés Matt Taibbi can write, despite all the corporate misfeasance the media can uncover, despite all the Occupying the 99% can enact – we’re still living with the same sharks shitting in our pool.