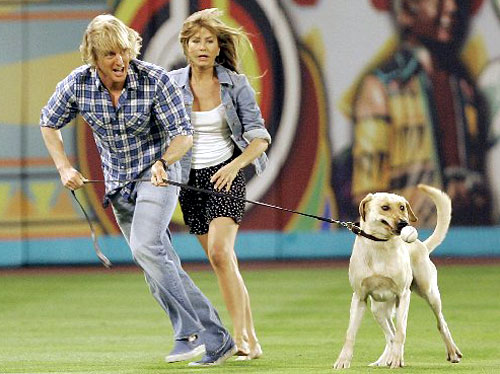 Cry havoc and let slip the dogs of boor…

In the insensate family comedy, MARLEY & ME, a young couple (Owen Wilson and Jennifer Aniston) buy a labrador puppy that we know the film wants us to regard as mischievous, lovable, cute, but which is, in reality, retarded, for when it grows to adulthood, it still has not learned one shred of discipline and cannot control its bladder or destructive nature.

I guess dog lovers think this is funny? Like Hurricane Katrina was funny to New Orleans.

Wilson is newspaper columnist, John Grogan (the same name as the author of the idiotic book of the same name – a special kind of conceit going on there, I’m sure); Aniston is his writer wife, named… Jennifer, who is only a writer until it doesn’t matter any more in the script.

Grogan buys his wife a puppy, names it Marley after Bob, to distract her from wanting a child; “something other than you that she has to take care of.” Dog then creates expensive, insensate havoc, mistaken for comedy by people who laugh at fart jokes: dragging restaurant tables, eating furniture, carpet, clothes, wrecking screen doors, breaking everything, eating Jennifer’s necklace, barking incessantly, pissing and shitting wherever it wants to…

That’s the movie. The whole movie. Stupid dog destruction piled on stupid dog destruction, with human subplots thrown in to salvage a shred of interest. I suspect Alice Cooper would especially like the dead baby tangent (Jennifer has a miscarriage), and every man who was dragged to this movie by his puling girlfriend will at least get to ogle the bikini chicks who can’t act.

Dog-lovers will irrationally love MARLEY & ME – all other sentient humans will be edging for a slip of knocker from one of the bikini babes or Jennifer Aniston that will never come.

I missed the boat on what makes MARLEY & ME supposedly funny, although in some alternate universe where people regard dogs as more deserving of life over their own primate species, it is hilarious.

Alan Arkin, as Grogan’s editor, provides the only levity, without even trying to – just Being Alan Arkin. Eric Dane is Grogan’s successful journalist buddy, Sebastian (look up smug in the dictionary, there’s a picture of this guy).

Kathleen Turner as a dog trainer, in her first role since the sex change to Hunchback of Notre Dame.

Movie tries to provide substance with Jennifer’s failed pregnancy. But after she raises three healthy kids, we ask ourselves: What was the point of that sidetrack?

Movie tries to contrast Sebastian’s womanizing, globetrotting life with Grogan’s fraying family rut. At one point, Jennifer is so frustrated with two babies and Marley destroying furniture and waking the babies, that she requests Marley’s ousting. In saying the one sensible thing in the movie, she and Grogan get into a fight that spills over into their frustration with their lives. But no one forced them to spawn two kids. No one asked them to retain the retarded dog after its reason for distracting Jennifer became obsolete.

I don’t get it. And please DON’T try to explain it to me. I fail to see how this dog continually breaking things is funny. Who in their right mind would find this precious?

The scariest part is, movie is lifted from the chronicles of the real life John Grogan and his havoc canine. So upon deduction, we realize the PEOPLE are the retarded ones. Just as kids are the products of their parents’ upbringing (or lack thereof), so too must John Grogan assume the blame as either derelict in his duties of raising the dog properly, or soft in the head for tolerating the dog’s erratic behaviour in the first place.

Someone once wrote to me that non-religious people shouldn’t view religious films – because they didn’t like what I had to say about a religious film. Well, non-dog-lovers probably shouldn’t view this film, as we’ve all missed the boat on why a dumb, untrainable mutt like Marley shouldn’t be put to sleep with extreme prejudice.

MARLEY & ME gives us no reason to love its canine star. Towards the end, there is too little, too late, as Grogan gives an impassioned monologue on how Marley once stayed up with Grogan’s sick kid for eight hours, as an example of Marley’s love. You absolutely sure the dog was not waiting for the kid to die so he could eat it?

Are dog-lovers so needy they will latch onto any animal that exhibits what they consider “love” towards them, when in reality it is obeisance towards the entity that provides them food and shelter? Grogan’s last words, “Give him your heart and he’ll give you his” are such a laboriously twisted spin on what we’ve just witnessed for the last 120 opprobrious minutes that we realize we are watching some kind of pathological study in denial. Evidently, a dog “giving you his heart” involves eating your furniture continually, pissing anywhere indoors, humiliating you in public, knocking over your kids, waking your babies, causing thousands of dollars of damage every week…and remaining untrained all its life until it dies.

At Marley’s deathbed, when Grogan declares his love for Marley, we realize that at no point in this ludicrous film did we ever feel that Grogan and his wife ever loved their kids as much as their mutt. And the dog only dies to shamelessly tug at the heartstrings of this film’s demographic – the fart-joke lovers… Montage, manipulative music, the tears of children, platitudes – it’s all here. And the dog-lovers eat it up like furniture.

Pet-owning constitutes one of mankind’s greatest arrogances anyway. It has nothing to do with love of animals or unselfishness or maternal instincts; it is about – as Vincent Price once leered on an Alice Cooper record – the “inborn need to dominate, possess”; the same reason zoos exist. Sebastian tells Grogan, “You got a kid, you’re a dad. You got a dog, you’re a Master.”