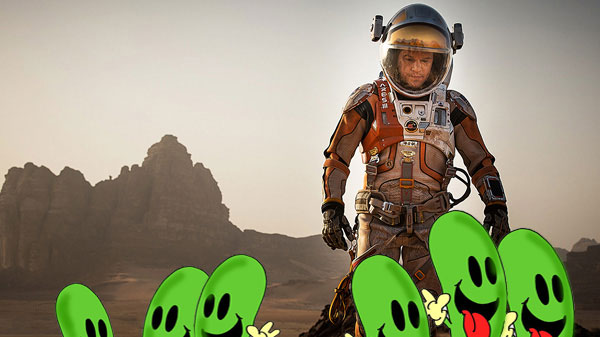 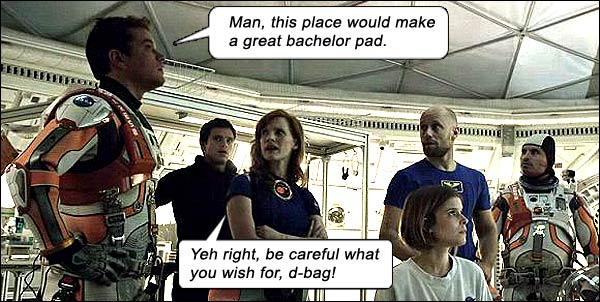 Well, he’s not really a Martian. He’s an Earthling. And he’s overstaying his visit on Mars without a Green Card.

Stranded, with not enough supplies to survive until the next crew arrives, astronaut Mark Watley quips: “I’m gonna have to Science the shit out of this!”

THE MARTIAN is a striking, intelligent film, from a book by Andy Weir, on how someone might actually endure a limited time on Mars with only the resources in his NASA expedition habitat. The best “realistic” science fiction adventure since GRAVITY, it really does Science The Shit out of surviving on Mars – until it Shits The Science in its final scenes, jumping the shark so badly, it negates all the elegant science and technological brilliance that came before it…

In Weir’s book, the idiotic method of Watley’s rescue is suggested and vetoed; whereas Hollywood took its usual liberties and simply did the opposite for screenplay clout. I went into this spectacular film fully prejudiced to respect its sincere portrayal of space exploration – and then THIS!

Matt Damon is astronaut botanist Watley, lost and presumed dead in a Martian dust storm, during which his expedition crew launches for Earth without him. Captained by Jessica Chastain, piloted by Michael Pena, crewed by Sebastian Stan and Aksel Hennie, with cuteness provided by Kate Mara. Honestly, I never figured what those last three did onboard, except stand around open hatchways in their spacesuits, while Kate Mara typed stuff looking cute. 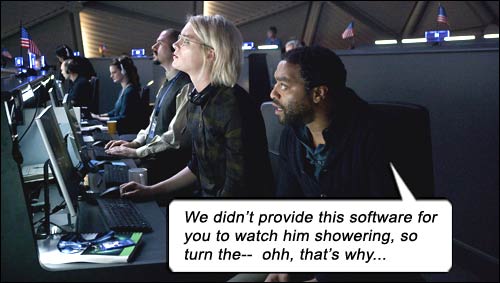 While the ship, called Hermes, is on its two-year journey back to Earth, NASA discovers Watley is alive, through satellite imagery, and rescue efforts start in desperation, led by Jeff Daniels as NASA head (how does this guy keep getting roles that require such gravitas after DUMB AND DUMBER?), with Sean Bean as flight director, Chiwetel Ejiofor as mission director, Kristen Wiig as a PR gnome, and Donald Glover as the Scruffy Physicist. Young Mackenzie Park handles her integral role as a NASA tech commendably amongst the panoply of stars.

THE MARTIAN loses me slightly with its humanitarian slouch. The general consensus of society might be RESCUE RESCUE RESCUE, but NASA, due to its dearth of funding, is a dogmatically pragmatic agency when it comes to treating human crew members as expendable equipment in their space ventures. To rescue a human from 225 million km away would require an assessment of whether that rescue would benefit the agency financially, or drive it further into the black hole of debt. Easy answer. Which would make for a very short film, or one that focuses on cover-up rather than rescue. Therefore, no movie stars willing to risk their careers on such anti-life behavior, and no greenlight. So RESCUE it is…

(Ironic that, in order to make money from this movie, the filmmakers had to portray NASA as uncaring about money.)

It could be assumed that Bean’s character exposed the truth about Watley to the public and therefore forced NASA to rescue him for PR reasons, but still… when billions of dollars are at stake, you can cover-up anything (just ask Henry Kissinger or Dick Cheney). I won’t turn this into a screed for conspiracy theories; it’s a PG-13 film about an inspirational rescue, with the lovable Damon as star. Any chance Watley will die a lonely, bloated death on the red planet? Exactly zero.

Most of the film is an extended montage of Watley prepping his habitat, growing potatoes, making water, finding the Mars rover Pathfinder (a supremely cool move!) to send messages to NASA, and generally Sciencing the Shit out of stuff. Even though he’s alone, his inner monologue is constantly verbalized, on the pretense he is recording everything. It’s a humor-filled, thoughtful performance, with grand gestures at key moments, like when he hears another human voice for the first time in months and breaks down. The issue has been raised that Watley is a tad jolly for someone in his situation. That just means he’s well-trained. As the people who raise that issue are not.

Scientific jargon, calculations, gravity assists, political conundrums, and somber performances that never stray into melodramatic, with each technician given the acres of intellectual credit they’ve never been afforded in feature films before. I love it! Locations on Mars include Acidalia Planitia, Schiaparelli Crater; we can sometimes see Mars’s small moons in its sky. Watley’s plan is based on knowledge and calculation – not “hope” – engineering a method to travel hundreds of miles in a limited-energy rover to meet the crew of the next planned mission!

A 70’s disco soundtrack, because the people who are old enough to appreciate this movie are the same demographic who would regard the source music as guilty pleasure. (Bowie’s Starman is incongruous in this collection, but it is not guilty, just pure pleasure!)

I hate this line – Bean to Ejiofor: “Do you believe in God?” Ejiofor: “Yes” (because, ignorant though they may be, we wouldn’t want to offend that worldwide demographic, would we?). Bean: “We’ll take all the help we can get.” Well, then that’s ZERO help from that fantasy. What else you got?

I love this line – Watley to his parents: “I died doing what I loved.” Isn’t that what we’re all aiming for in this wretched life?…

Ejiofor rips up his political tightrope role. Every time I watch this guy, I tear up at how damn good he is. Where does he GO in his head to wrench these mighty performances? He might have garnered acclaim at last in 12 YEARS A SLAVE, but that was not his primo performance. Every performance is an astounding journey into his character’s skin: from SERENITY to KINKY BOOTS, from CHILDREN OF MEN to AMERICAN GANGSTER, and even crap like 2012. Kristen Wiig, though doing a studied job, is completely miscast beside him, not through any lack of skill on her part, but because Ejiofor is like a galaxy eclipsing a moon when he’s around ANYONE. She gets one moment to be her cute, funny self, when bewildered at why Mission Control dubs the rescue mission “Elrond,” from the council meeting in FELLOWSHIP OF THE RING – apparently a totally authentic trait of NASA’s – with each actor playfully choosing a Lord Of The Rings character name, which would have been redundant for Sean Bean as he was ACTUALLY THERE as Boromir, in the Garden Of The Twelve Noses.

Filmed on location in Wadi Rum, Jordan, for its breathtaking otherworldly vistas, THE MARTIAN’s pacing ramps tension eloquently, as it flits between Watley’s ochre isolation and the clinical number-crunching of NASA. With each visit to Daniels, Bean and Ejiofor in Mission Control, more factors add to the adversity, and the ticking clocks are very realistically numbered in months and days (“sols” as the Martian days are called).

And notably, once again in a major Hollywood production, the A-List stars are all SCIENTISTS. And there are no villains, except maybe the God of War himself, Mars.

Unfortunately, being a major Hollywood production, THE MARTIAN ultimately stoops to pandering to the lowest common denominator when it comes to physics laws. Of course, a movie isn’t simply made up of scientific precepts, nor is it all emotional story – like rocket fuel, it’s a mixture that should ideally thrust us off the surface of the Earth and take us on a journey. Most of the film is commendably scientifically accurate (the spinning Hermes and its artificial gravity; taking it for granted these people are smart, so don’t over-explain things; hexadecimals; the travel times in months, not ticking clocks), so some of its liberties can be forgiven (the Mars dust storm in such low gravity could not be that powerful; Mars’s one-third-Earth-gravity is never felt; communication times mishandled), yet screenwriter Drew Goddard (coincidence he has the same last name as the Father of Rocketry, Robert Goddard?) and veteran director Ridley Scott feel the need to ramp the film’s tension in the third act to literally ridiculous proportions, and actually include in their movie the very maneuver that writer Weir excoriates in the book. Newton’s Third Law of motion shat upon – just to be Iron Man. Here comes The Fonz on water skis…

The exact physics mistake in Brian De Palma’s MISSION TO MARS (2000) is repeated in THE MARTIAN, to create a new generation of scientific retards. What happened to you, Ridley? I loved you man! I clap my hands to my cheeks like Macauley Culkin and wail: