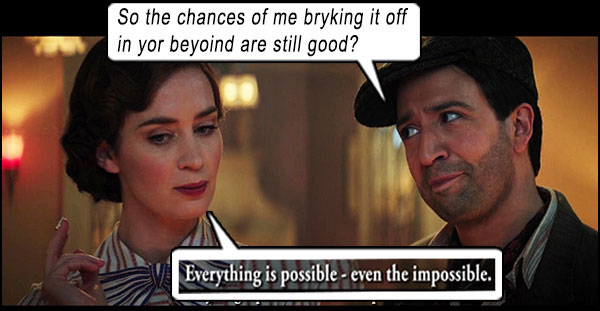 Return of The VVitch!!

MARY POPPINS RETURNS is the sequel to 1964’s MARY POPPINS, where Julie Andrews played a witch who fell from the sky to nanny a British family during their hardship. In this new story, produced 54 years after the original (yet is set about 25 years after the original’s events), Emily Blunt plays the same Poppins witch, who descends from the skies a generation later to help the grown kids of that British family. Filled with musical numbers, comedy, dancing, cartoon animals, and platitudes enough to break your blood vessels, MARY POPPINS RETURNS is a magnificent production, from the songs, to the performances, choreography, and the classic 2D cartooning; however, the movie is opprobrious from a societal standpoint because, like every Disney production, the contradictory messaging is infuriating, anti-social and dangerous; the platitudes about hope and dreams and love and family glut the screen while the movie itself is demonstrating each platitude to be as hollow as the movie industry that is spewing them at us.

Movie opens with Lin-Manuel Miranda as a lamplighter, on his rickety bicycle and ladder, extolling the virtues of the Lovely London Sky (eurph! This underprivileged lamplighter has obviously never traveled south of the 25th parallel); this is Dick Van Dyke’s role from the original (who played a chimneysweep – and I guess the filmmakers thought that a young audience wouldn’t relate to that outdated profession), and if anyone could take the place of all-round entertainer Dick Van Dyke, it is surely this talented young singing-dancing-composing genius. (As a YouTube commenter says, “Any movie that starts with Lin-Manuel Miranda singing knows what it’s doing.”) Still, what’s with Hamilton’s accent? Is he trying to do as bad a cockney accent as Dick Van Dyke in the original?

We meet the Banks family, patriarch Michael (Ben Whishaw, playing the role of the little boy from the original, all grown up with his own family), his sister Jane (Emily Mortimer, also a grown version of original’s kid), and Michael’s three children, Annabel (Pixie Davis), John (Nathanael Saleh) and Georgie (Joel Dawson), all three skating on the edge of adorable and irritatingly precocious. We also learn that Michael works as a teller for the same bank where his father was CEO (they opted not to make him follow in his father’s footsteps for plot purposes, but also because nowadays CEO = Bad. Brrrr!); he is also a painter (because that’s a “noble” profession – and of course he doesn’t earn money from it because if you earn money for your skills, you’re NOT noble… are you starting to see the Disneyfuckation of these story elements?).

Michael’s house is about to be repossessed by his own bank, unless he can locate the certificate of bank shares that his father left him. Plot revolves around this lost certificate. Also – wife dead. Of course – Disney! Also, sister Jane is a labor organizer (as opposed to their mum, who was a suffrage activist – again, no young kids will comprehend how women once had no rights), and she also works in a soup kitchen, because – FUCKING DISNEY. Okay, we get it: everyone is “noble” in this family, which is why, we’re presuming, they are allowed to be saved by magic who cares fuck you. In the form of Mary Poppins.

Fantastical adventures ensue, this time, not in a sidewalk painting, but in a bathtub and a bowl, coupled with vigorous dancing and slap-happy songs (all musical numbers by Marc Shaiman and Scott Wittman). It would all be a grand diversion if it were not for the film’s biggest plot deficiency, which is: Since the Banks family’s future rests on that certificate, why is Mary Poppins exerting her magic on everything else around the house, instead of bringing her black magick to bear on just finding that certificate?! When she first arrives, Poppins says she’s there to “help the Banks kids” meaning the grown-ups, of course (who were kids the last time she was here). Oookay. FIND THAT CERTIFICATE! That’s the best possible help you can give, then you can be on your way, VVitch! Instead, she hangs around like a sweet-smelling fart, proving herself utterly useless: keeping the kids amused with mind-altering hallucinations while the dad searches for the certificate is not helping!

Instead, the movie takes the roundaboutest way to achieve Happy Ending, of which Mary Poppins is not instrumental at all, thereby making her seem like a fifth wheel in her own movie during the third act chase climax.

Colin Firth is the dishonest, embezzling bank CEO – because if you haven’t got the message yet, kids… And 91-year-old Dick Van Dyke appears at the 11th hour to spread Disney lotion over everyone (is that old-guy makeup? Or did Dick just come from home?). At his age, doing that soft-shoe on the table with no stuntman must have sent this movie’s insurance brokers running for cover.

In a twisted serendipity, Michael finds the certificate on the back of one of his discarded drawings. See, kids? It was his ART that led him to the means to keep his house. His NOBLE ART. 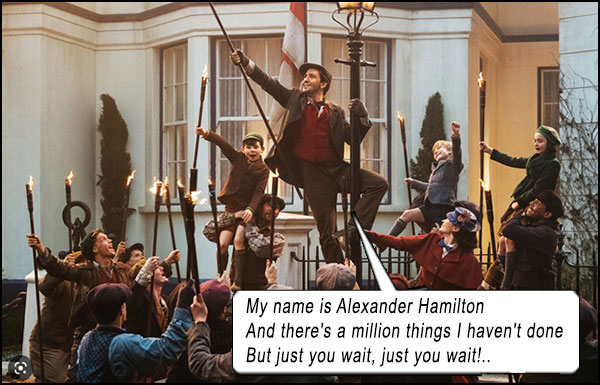 I never liked the original MARY POPPINS as a kid – even then, I could see through the contradictory messages – and I detest magical children’s movies promulgating demonstrably fake aspirations (like “anything is possible, even the impossible!”), and I wholeheartedly DESPISE Disney Corp… but that music! That music in the trailer! Why are my tear ducts burning? What sort of misplaced anemoia is this? And we find the trailer’s swaying back and forth from nostalgia to annoyance is exactly how the movie plays out.

There’s the nostalgia factor for those weaned on the original – the period costumes, the many homages, the songs sounding of the period – and then it sways over to the stupidity of the Admiral next door (David Warner in his last film role) firing a cannon every hour. (What is the point of retaining this idiocy from the original? If every valuable in your home has to be caught from falling off a shelf every time he fires, what happens when you are not at home – as the Banks are many times?) Van Dyke’s chimneysweep dance has been replaced by a group of lamplighters – still as energetic and impressive – then it sways stupid again when they “turn back time,” meaning turning back the hands of Big Ben (uh, guys, that doesn’t mean you’ve turned back time – which is what they insist on calling it).

And the most amazing nostalgic homage – a hand-drawn cartoon segment, where the Penguins make their hilarious appearance! Back in 1964, 2D was the state-of-the-art, but now the convention is digital, lifeless 3D animations, yet director Rob Marshall purposefully went with hand-drawn cels (colored digitally), created by cartoonists with actual talent, who have mimicked the 1950’s cartooning style impeccably, which makes all those cartoon animals funny by virtue of the craft itself.

To its credit, movie does not lean on repeating the old tunes – Let’s Go Fly A Kite, Supercalifragilistic, etc. – but works hard to make its own songs very catchy, and tongue-twistingly enjoyable; whether they become classics in their own right, only time will tell… and then it annoys, by singing, “Nothing’s lost forever / Only out of place…” to their father who is weeping into his hands over the absence of his dead wife! So my deceased wife can be found if we look hard enough, you insensitive chodes?

And another example of Disney not giving one fuck about their contradictory, dangerous messages: While Poppins and the children are transported inside the cartooning world of the bowl, Poppins warns the kids not to go near the edge. Of course, they get into a chase and go tumbling off the edge of the bowl into blackness… and wake up safe in their beds. See, kids? Another great lesson from Disney: Rules don’t matter, there is no liability, you can just disobey your nanny and everything will end up fine!

They take the broken bowl to Cousin Topsy (Meryl Streep) to fix. Topsy disallows them entry into her home, because she “doesn’t accept deliveries on second Wednesdays” due to her house turning upside-down some-stupid-shit. Does Poppins wait for a day when Topsy is accepting deliveries? No, felon Poppins breaks in, telling the kids there is no time like the present. Then she forces Topsy to fix it. Are you learning, kids? You CAN drop off your broken goods at the shop after it’s closed – just break in and force the elf to fix it. For free, of course.

And in a movie that touts imagination as a good thing, Michael apologizes to Poppins about his boy “suffering from an excess of imagination” – this, from a guy who jumped into a fucking street painting when he was a kid. Does Disney even remember its own characters?