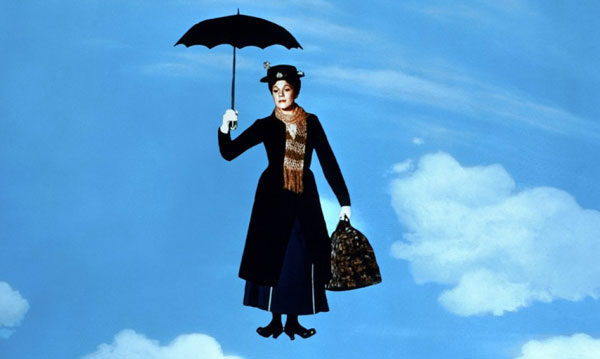 Fear me, you lords and lady preachers / I descend upon your Earth from the skies…

An antique anachronism like MARY POPPINS should best be viewed through the eyes of Innocence. So for the benefit of young children everywhere, this movie will be reviewed not only by Poffy, but also by Poffy’s dolly, Pliffy. 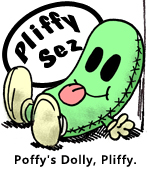 Halloo, Me am Pliffy. Me don’t know much about movies, but Poffy let me talk about them anyway.

MARY POPPINS is wonderful adventure for kids like me, because I don’t think. It is colorful and magical and British. I love to sing songs and skip and play, so movie being a musical make me happy and gay.

Julie Mandrews is magic nanny, who flies down with magic umbrella to bubba-sit two kiddies in London. She give them spoonful of sugar, tidies their room by magic, and casts spell on them by supercalifragiodinjtafspsvfgfhzm. She take them into painting made by Dick Mandyke, where they ride carousel ponies and have fun with cartoon penguins.

Their dada is bank stiffy, their mumsie is suffrage, so have no time for fun with them, but when Mandyke brings his chim-chimineys and they dance around house covered in soot, dada loves his children again. Because Mary Poppins makes love by magic. And that’s supercalifragiodinjtafspsvfgfhzm.

What is love worth when it’s created by magic? From stories by P.L. Travers, Disney Studios transmogrifies MARY POPPINS so that the movie’s arc seems to focus on preoccupied parents eventually finding time for their kids, but the movie defecates all over its own message when it brings magic into the equation. If you’ve been coerced to “love” someone because magic has wrought circumstances for you to be able to love them, then what is that love worth? Shit. Which is coincidentally what P.L. Travers thought of this movie. 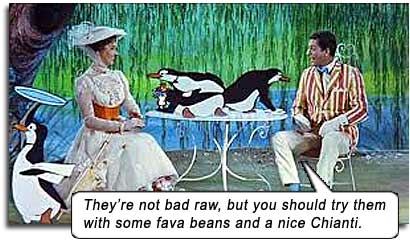 In this horrifying twisted gargoyle of a movie that willfully misapprehends its own mixed messages, a witch named Mary Poppins (Julie Andrews, looking eminently doable) flies into the Banks household in 1910 London, ostensibly to act as nanny to the two neglected Banks kids (Karen Dotrice and Matthew Garber), but ultimately to destroy the dreams of their parents who were trying to make a better world for their kids to inherit. You see, Mrs. Banks (Glynis Johns) is an activist in the women’s suffrage movement, fighting for the female vote, but in the end, forsakes that cause to spend more time with her whining kids, because women don’t need to vote and drive and stuff, do they? And Mr. Banks (David Tomlinson) tries to teach his son to invest money, while Poppins puts it into the son’s head that he should use his tuppence to “feed the birds.” Now taken as read that money is needed to feed the birds, wouldn’t it be more beneficial even for the birds if the son invested the money and made more money, so that he could feed the birds more often? Never taken into consideration. Over this issue, Mr. Banks loses his job.

But don’t worry, MARY POPPINS is Disneyfied to mind-raping proportions, so Banks will not only get his job back, but become CEO of his bank, for no apparent reason other than because he is flying a kite with his kids and singing like a fairy. Never mind that the duties of a CEO means he will now have less time to spend with his kids and more time to spend with prostitutes…

MARY POPPINS is considered a “classic” because of all the circumstances surrounding its release – the studio (Disney was and is a powerhouse studio), the era (musicals were the artform of the day), the kids of the day considered smaller, retarded versions of adults, being told this is what they wanted, and grownups of the day force-feeding it to their kids due to Orwellian marketing; well-loved actors and sprightly, colorful musical numbers; winner of 5 Oscars, including Best Visual Effects (combining live action with two-dimensional cartoons; not the first time it was done, but probably the best exponent of the technique) which would only aid its synergy as supposedly worthwhile media. 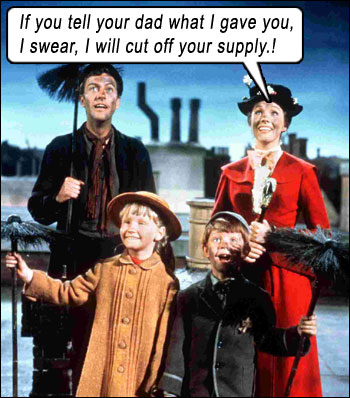 If you can see past the sorely dated songs and painfully theatrical acting, MARY POPPINS shines for its production values and the talents of Dick Van Dyke. There’s no denying that Van Dyke is a fabulously adept showman, dancer, entertainer, in tune with his whole body (reminiscent of Charlie Chaplin, Buster Keaton, Jerry Lewis). And his dual role (under heavy makeup) as the old banker, is hilarious. But what’s that he’s trying? A British accent? Yes, it’s very trying. Every time he opens his mouth, it cancels out any dance routine or acrobatic comedy stunt he’s just pulled. It is purely and simply rape of the King’s English. Everyone else in the cast is British and not one of them had the temerity to tell director Robert Stevenson that Van Dyke’s idiot cockney was an embarrassment to their whole culture and an insult worthy of a declaration of war. Apparently Van Dyke had a vocal coach. Who was obviously getting paid on false pretenses if Dick’s misshapen jowls were the result of his coaching.

But then, in a movie where the word Supercalifragilisticexpialidocious is used with such profligate abandon to mean nothing and everything, Van Dyke’s raping looks like a fingerbang.

I might be considered more of a cynic than my dolly Pliffy, but even if you buy into all the magic and gaiety, the movie still makes no sense. Consider: In one of the “moral lesson” songs, Poppins sings that “a spoonful of sugar makes the medicine go down / In the most delightful way,” meaning that if you must experience something painful or unsavory, add something fun to it that will take the edge off the unsavoriness. Poppins relates this metaphor to the kids tidying their pigsty bedroom. Then she tidies the room by magic. So why does this magical exercise (that has no downside) require a “spoonful of sugar” to make it palatable? Oh, you mean I can mess up my room to my heart’s content, because it can be tidied in 3 seconds flat by magic?

The next irresponsible thing this witch does is teleport the kids and herself into a pavement painting done by a street bum (Van Dyke), then lets them run off to a fair by themselves while she makes time with the bum! (Disneyfied “making time” so we don’t see anyone’s actual bum.)

They all ride carousel ponies off a carousel and down a country road, going up and down as if still on the carousel. Poppins expressly orders the kids and the bum, “Don’t race!” – then immediately leads them onto a racecourse (while continuing that sexual up-and-down motion that I’m sure prompted supposedly proper men of the era to touch themselves in those dark Disney theaters), and joins an actual race! What happened to what you said just one minute ago about not racing?!

Even during a remarkable dance sequence that anyone from any era would appreciate – the acrobatic rooftop chimney sweep dance – stupidity rampages in when a senile old admiral on a nearby rooftop fires a cannon at the chimney sweeps. I don’t blame him – it was remarkable but still annoying – but then how dare you point fingers at Judas Priest and Ozzy Osbourne when you’re looking for messages of murder aimed at your impressionable kids?

All those songs are here, that you’ve heard somewhere, somewhen, and wished you could bitchslap the songwriters for making you feel dirty: Chim Chim Cheroo, A Spoonful of Sugar, Let’s Go Fly a Kite, Supercalifragilisticexpialidocious. Now you know who to blame.

As a final insult to you and your kids’ intelligence, Poppins brings all the filthy chimney sweeps into the Banks house to dance around and spread their gonorrhea, syphilis and soot. Mr. Banks comes home, is righteously outraged, and demands of Poppins, “Explain yourself!” She replies, outraged that the owner of the house would dare question her irresponsible actions, “I never explain anything!” See, kids? You can make a mess and get away with it if you feign outrage when you’re asked to justify it. And if you’re a witch with a Janet Leigh pointy bra.

If you’re okay with all these non-sensed morals squirming their way subliminally into your kids’ neocortexes, yes, you can say MARY POPPINS is definitely for kids. Kids from the 1960s. The chances of a modern kid over seven years old being able to sit still through this old-world LSD Dickensian fancy-mare are as slim as Dick Van Dyke nailing a British accent.

How Disney works its “magic.”
P.L. Travers, the author of the Mary Poppins books, considered this Disney film a travesty of her written works (except for the casting of the talented Julie Andrews). So don’t look at me like I’m some kind of freak for telling it like it is against the delusions of a culture inculcated with this movie’s supposed wondrousness. Travers was so mortified by what Disney studios did to her stories, that she refused to relinquish the rights to a Broadway version of the movie. But that’s okay – good old Disney just waited until she died and then made the Broadway version anyway – that’s the magic of Disney!

As I write, a 2013 film called SAVING MR. BANKS is premiering, about the making of MARY POPPINS, starring Tom Hanks as Walt Disney and Emma Thompson as P.L. Travers. I am curious as to whether that Disney production will portray the real life animosity between Travers and Disney – or will it be a Disneyfication of the truth – like the film MARY POPPINS was a Disneyfication of Travers’ original stories? (Disneyfication being a euphemism for Bullshitification.)