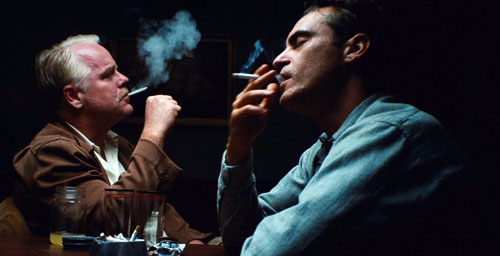 Joaquin Phoenix meets Philip Seymour Hoffman and all Asgard and Midgard tremble in their Acting wake.

Freddie Quell (Phoenix) is a rudderless veteran returning from WWII, who stumbles upon the yacht of Lancaster Dodd (Hoffman), a “minister” for The Cause, one of those pseudo-scientific cults that likes to pretend it’s a real religion, like Scientology. And all metaphysical bulldung breaks loose…

Lancaster, known as “The Master,” immediately sees a pigeon in Freddie; that “type” most susceptible to being a follower; he sees in Freddie that same desperation, weakness, call it what you will, that everyone who relinquishes their sanity to cults positively thrums with. And he likes Freddie’s recipe for moonshine, gained during the war. He asks Freddie to partake of “processing” – pointed, intimate questions to “release his spirit.”

Lancaster: “Our spirits lie in the whole of time, exist in many vessels through time. This is the vessel you are existing in now.” Part regression, part hypnotism, part reincarnation – all bulldunging. “Man is asleep. This process wakes him from his slumber. This is a process of DE-hypnotization.” The terrifying part is not that “spiritual leaders” make all this guff up; the terrifying part is that they believe it. What’s more terrifying is that even if they don’t believe it – their disciples do.

Freddie is captivated by Lancaster’s ramblings, and informally joins the team, which consists of Lancaster’s wife Peggy (Amy Adams, pregnant in real life, so playing pregnant here), his son and daughter, and other disciples in various states of collective insanity.

Lancaster travels the country selling his snake-oil, “capturing the flaws of the mind and correcting it back to its inherent state of perfect.” At a well-to-do function, he allows himself to be cornered by a skeptic: “Good science, by definition, allows for more than one opinion, otherwise you merely have the will of one man, which is the basis of cult.” We find that Lancaster cannot meet confrontation without going overboard – like most gurus of pseudo science, he has no recourse when questioned by rational minds. He reverts to calling the skeptic a “pigfuck” in frustration, to the dismay of all those richies around him funding his dalliances. Reminds us of the puling of self-proclaimed masters Glenn Beck and Bill O’Reilly reverting to shouting down detractors when there are no legs left to stand on.

Wife Peggy is sick of defending herself and Lancaster against skeptics and wants to attack them first – she’s really drunk the Kool Aid. But then, Freddie does the next best thing – he does.

Freddie inadvertently becomes the id of the cult, when he explodes in ignorant frustration at the skeptic. But the Master reminds him to be rational. So Freddie’s solution with dealing with non-believers is to rationally beat the crap out of them. Let’s face it: we’d like to attempt the same cure for cultists, albeit with contrary results: beat some rationality into them. 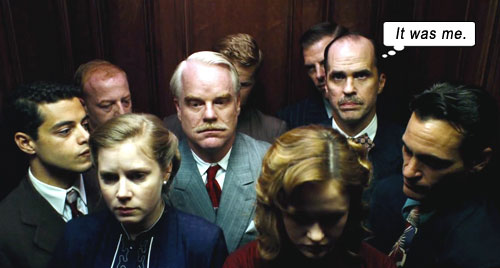 Paul Thomas Anderson (THERE WILL BE BLOOD) writes, directs, and goes Kubrick on us, shocking our senses when all the ladies in the room are suddenly quite nonchalantly naked! It’s almost like the movie itself is opening our minds slowly to reality (what The Cause claims as its method); we see a high society scene where Lancaster is singing merrily in a crowd, the camera pans away, pans back, and – the ladies are all stark bollocks, still singing as if nothing is out of the ordinary. Not just naked, but 1950’s naked, meaning heady amounts of mungabush.

Nude frolicking with the devil? Now this kind of cult I agree with! Is it metaphorical? Is it real? Were these people naked all along and we just couldn’t see with our dulled senses? Old ladies gaily chorusing, and Amy Adams gloriously nude – but pregnant (horrifying!).

THE MASTER surprises us with its thematic direction. Instead of advocating for or against the cult, or focusing on the cult leader – the titular, enigmatic Master – it deals with the fact that a person who seems a perfect seedling as a disciple for a cult, proves not to be. The story is about the dysfunctional bromance between two men, one who thinks he has found Truth, one who admits there IS no Truth.

Freddie is never turned fully. He remains alcoholic, intemperate, unpredictable. He starts to doubt the Master’s powers. As do some of his followers. Peggy wants Freddie gone. And then one day – he is.

The Master gives him an “exercise” on a motorbike and a flat plain – drive like the devil toward a distant point. Then come back. Freddie doesn’t come back. The smile fades on the Master’s face. Long walk back to town…

One critic says that Paul Thomas Anderson’s predilection for ending his movies in the middle of a sentence stems from presenting a life, just a man’s life, where there is nothing so cut and dried as a first act, middle act and denouement.

After the Master tries to cajole Freddie back into the fold – “We are connected” and other spiritual bulldung – and Freddie refuses, we realize the movie is showing us a new animal. All media assaults us with the idea that characters like Freddie (weak-willed, directionless, down on their luck) are the type prone to tilt toward cults and religions and EVP and AA, etc. But Paul Thomas Anderson begs to differ, and seems to be emulating Woody Allen in ending his movies where we feel there should be a beginning.

No harm in emulating a real Master…