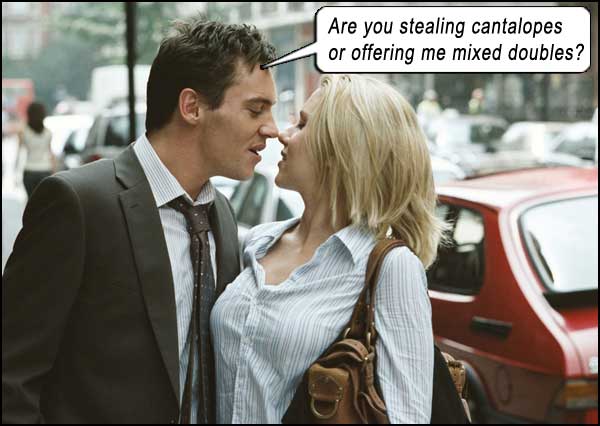 There is such a brilliant hook in Woody Allen‘s MATCH POINT that to say anything about it would ruin its impact.

So I’m going to anyway. It’s the woman in me.

Writer-director Allen leans so heavily on the tennis idiom (from opening the film with a tennis analogy dependent on luck – a ball nicking the top edge of the net – to the lead character being an ex-tennis pro, to the title of the film itself) that he hooks us wholeheartedly into the idea that any ball that nicks the net needs to go over the net to win. 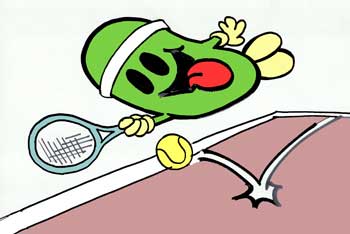 Then the movie does exactly the opposite. To say any more would be far too feminine…

Chris Wilton (Jonathan Rhys Meyers) is that ex-tennis pro turned instructor at an exclusive London club, where – as luck would have it – he befriends a painfully upper-class British tennis student, Tom Hewett (Matthew Goode), who invites him to an opera, where his sister Chloe (Emily Mortimer) then falls for Chris. And like any good friend, Chris promptly falls for Tom’s fiancé, Nola (Scarlett Johansson).

In a situation which might have easily degenerated into a tiresome love-quadrangle farce, MATCH POINT instead adopts a stance contrary to that of any given formulaic “American” Love Story. In other words, it is not a complete waste of time, brain cells, funding, resources and talent.

How Woody Allen, a steadfast New Yorker, managed to capture the upper-class British idiom so concisely is a wonder. Sure, employing British actors helps, but the writing seems inherently British from the outset. For example, when Nola comments on her fiancé Tom being handsome and asks whether Chris also finds him handsome, without any hesitation, embarrassment, or sophomoric gay innuendo, Chris replies, “Very.” Decidedly NOT an American response.

Further, in crafting the film on location in London, the censorious MPAA (Motion Picture Association of America) seem to exert less of a stranglehold on “injurious” themes, especially their insulting edict, “no crime shall go unpunished.” When unpunished crime, abortion or infidelity arise in MATCH POINT, there is no moralism attached, no proselytizing or justification. Whereas wide-release American movies have reached a point where they must explain or justify every action for their dim-witted, lazy demographic (thereby becoming a collective insult to their own audiences by their very pandering existence), this movie floats free of those strictures, and is crisper, more mature and infinitely more powerful for it. 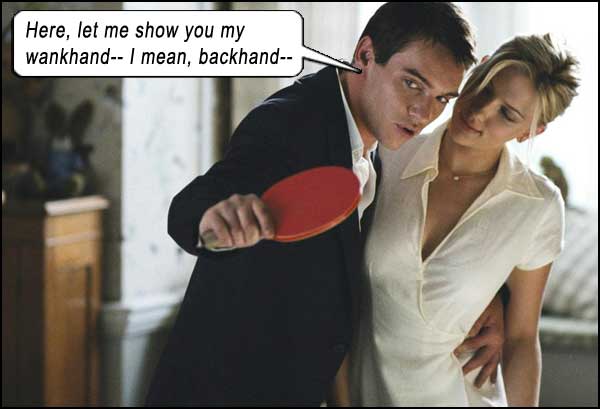 Realizing that operatic themes were nothing more than the pulp fiction of their day, Allen slyly uses the melodrama of opera as a backdrop, enabling him to push the pulp envelope. When Chris Wilton is forced into deciding which woman he wants to retain in his life, the faux-operatic extremities he takes are congruent with the opera soundtrack enhancing the surrealism. Like Mozart’s Don Giovanni, Chris remains unrepentant; like Verdi’s La Traviata, his lover is a whore, and like Eastwood’s HIGH PLAINS DRIFTER he’s going to resolve the problem in very stylish pants.

In true European idiom, Chris thankfully does not assess which woman he “loves” more; he assesses his future – and acts accordingly. At last: Truth in a movie! Though the American Teen Power Phrase “Do you love her?” was brought into play for the Great Unwashed to sink their blunted teeth into, it is never dwelt upon, this story intelligently illustrating how codifying or measuring “love” does not resolve harsh realities. Unlike the formulaic drivel that informs ninety-percent of character motivation in films, Chris’ final, fateful decision is not made because he feared losing love, but because he feared losing his enablement.

Like a more intense Ewan McGregor, Rhys Meyers’ aloof intensity is something that American actors must work hard to attain (excepting Clint Eastwood). His reptilian charm defines the term “smooth criminal.” We discover how smooth in the film’s final frames.

The UK cast – down to the smallest bit parts – are flawless, including Brian Cox and Penelope Wilton as Chris’ in-laws, Ewen Bremner and James Nesbitt as flustered detectives and Rupert Penry-Jones as a tennis pro friend and Margaret Tyzack as a doddering neighbor. 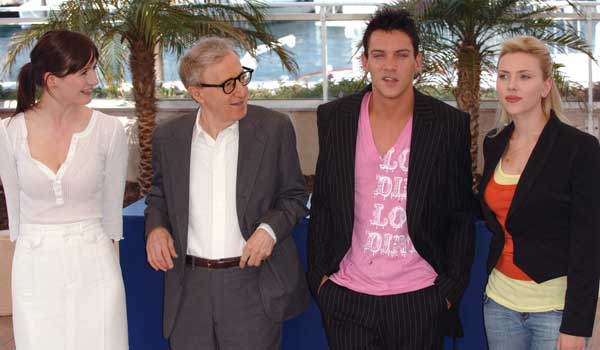 Scarlett Johansson is almost not ready to be placed amongst this cast, as her jarring American acting training clashes irreconcilably with the fluid ease of the UK ensemble. Satirizing Shatner has become passé, for what comedian Kevin Pollak termed his “pause acting,” yet Shatner merely accentuated a certain American Method. In American movies featuring American actors all purveying this Method in varying degrees, it goes unnoticed. Held against the naturalistic European Method, it is virtually unwatchable, Johansson’s most irritating Shatner occurring during the scene where she opens up to Rhys Meyers after a failed audition, Rhys Meyers’ potent, uninflected replies colliding with her heavily inflected “acting” responses. Though she shines with a flirtatious, needy light in this scene, all that keeps springing to mind is, “Khaaaaan!”

Woody Allen is like Clint Eastwood – well, not in terms of Man With No Name, raptor-eyed, deadly screen presence – but as a film-maker. The older he gets, the more mature and well-made his films become. Or maybe it’s just ME getting older and able to discern the film-making process more intelligently; either way, we’re all getting scarier.

As Eastwood never shies from antisocial and politically-incorrect themes, Allen’s subtexts in this movie are hilarious for their blackness:

As soon as Chris’ wife Chloe makes “getting pregnant” her raison d’etre and as soon as his lover Nola actually gets pregnant, they both become insufferable. With his wife, mechanical, passionless sex, with his mistress, maddening whining and threats, to the point where no amount of bra-less t-shirt-wearing will save her. It is unlikely that women will ever glean the subtext: that it is not sex, marriage or infidelity that drives a man to madness – it is anything to do with pregnancy. Then there is the deeper irony which Woman will refuse to see as long as the species must procreate: that the very thing which she believes seals her future with her mate – pregnancy – in actuality rends his psyche from hers irreconcilably.

Via Woody Allen’s magnificent art, that’s coming straight from the Man in all of us…