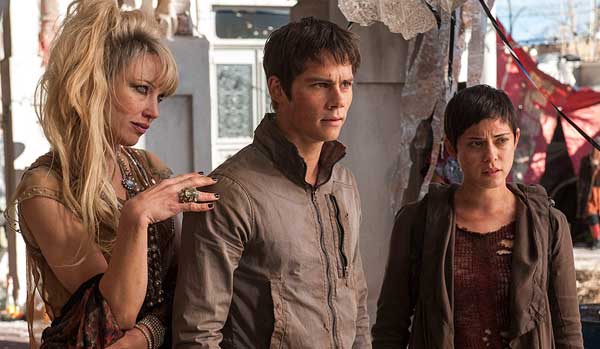 When lesbian hairstyles threaten the Apocalypse, pray the sluts fight back.

Out of the maze, and out of ideas.

Well, there’s no maze, no scorch and no trials. Why then, is this movie called MAZE RUNNER: THE SCORCH TRIALS?

This movie’s predecessor, THE MAZE RUNNER (2014), had an interesting hook – the Maze itself, which held our heroes trapped within it; the all-consuming sinister element of the story. In this sequel, the Young Adults imperiled by the maze have conquered it – doing so at the end of the last movie – so that dynamic is totally lost, and the writers have tried to shift the sinister element to that of the amorphous “scorch” i.e. outdoors. Oh, scary. Considering the kids were already living outdoors in their evergreen Glade, this rewrite of Earth’s atmospheric conditions just stinks of desperate Making It Up As You Go Along storytelling.

Movie opens exactly where MAZE RUNNER left off – no introduction to characters, no fleshing out of roles, no exposition – just a bunch of kids “rescued” by some shady organization that puts them through the old interview-in-a locked-room process. Well, at least they’re not in the clutches of WCKD anymore. (I discovered that WCKD stands for World in Catastrophe Killzone Department. Jesus, they’re joking, right? Who thought up that name, a twelve-year-old Harry Potter fan wearing spandex?) To the kids’ surprise, they discover the sinister old tart running the place (Aidan Gillen) is actually working for WCKD– wait, I can’t say that with a straight face– because All Adults Are Bad, right? — and this “haven” is harvesting and experimenting on Young Adult Masturbation Fantasies like themselves (like THE ISLAND, or CLONUS: THE PARTS HORROR). So they escape, using the cunning method of Air Ducts Big Enough For Elephants… and go outside.

The principals from MAZE RUNNER all reprise their “Glader” roles: Dylan O’Brien as Thomas Sexy Leader, Ki Hong Lee as Minho Asian Demo, Kaya Scodelario as Teresa Kristen Stewart, Thomas Brodie-Sangster as Newt British Brain, Dexter Darden as Frypan Token Black, and Alexander Flores as Winston The Expendable (who gets to over-emote in a death scene which I’m sure is now on his sizzle reel).

“You might have survived the Maze – but you’ll never survive the Scorch.” Really? Looks like just another sunny day in LA. This is no blasted, radioactive, ultraviolet sun beating down and mutating human DNA. It’s beach weather. As they plod along talking about teen stuff, the only danger seems to be the threat of dying of boredom. And the only “trials” these kids experience is running from The Man: for seven kids, the harvesting facility (overlorded by Patricia Clarkson, reprising her role as witch granny) thinks nothing of blowing its budget on helicopters, soldiers, weapons, ammunition… What the hell for? There are hundreds of kids still in the facility to conduct hellish experiments on. Why are you wasting all these resources chasing seven nondescript ones into the Scorch? No one – in the story or, apparently, in the audience – ever stops to consider the concept of diminishing returns.

And then – zombies. And the movie falls down and can’t get up again.

It doesn’t matter what they’re calling these “inhumans,” “irradiated people,” “cranks” – we all know what the market research says about this most soporific and unimaginative of predatory devices. The teen demo can’t get enough of them – so these jerky, undead things come foaming after our heroes at regular intervals to remind us how soporific and unimaginative the writers are.

These kids sure say “shit” a lot. I guess that’s the preferred swear word of Young Adults. Or at least, what the censors say it is.

To aid in their [snigger] “trials,” first there’s Giancarlo Esposito (like Gus Fring, always looking to cut a deal, “Who are you, and how can I profit from you?”); Alan Tudyk as a pansexual nightclub owner (who gives Thomas some bad acid whereupon he almost has sex, but then thinks better of doing something interesting and just wakes up); and Barry Pepper and Lily Taylor, dressed like road warriors looking for gasoline.

By the end, we discover that Nothing Happening for most of the movie was Just The Beginning, as Thomas vows he’s going to Do Some Stuff to someone but he’s gonna do it in the Next Movie.

The trial of waiting for another sequel where nothing happens has begun.