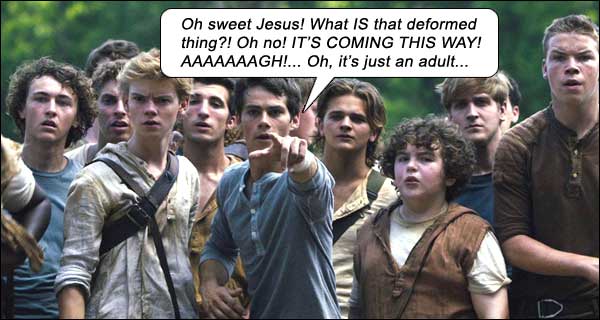 This is how we Pac Man now.

THE MAZE RUNNER strands a teen dream amongst a community of other teen dreams and watches him cause havoc amongst the hierarchy with his plans to escape this perfectly well-regulated nature community.

Dylan O’Brien is teen dream Thomas, who wakes up one day in a rickety steel elevator, rising up to be greeted by a group of other teen boys in a closed off wooded community called The Glade. Cue exposition by Alby The Racist Dragon. (Aml Ameen plays Alby, and he’s not really a racist dragon, but all I can think of when I hear that name is the FLIGHT OF THE CONCHORDS song.)

Glade surrounded by high walls; beyond the walls – a maze! Supplies sent up once a month with a “greenie” (a new person); memory erased, male, teen dream. About 60 boys here, each assigned a task to keep life well-rounded in this entrapped society. “Runners” venture out every day to find a way through the maze (which changes every night!); beware the mysterious Grievers. No one knows who is responsible for the boys’ plight. And no one has found a way through the Maze…

Thus setting up what author James Dashner hopes will be his modern analog to The Lord Of The Flies. Lifted from the book series of the same name, THE MAZE RUNNER is a simplistic baby-brained version of William Golding’s 1954 award-winning sociological godhammer. Shallow, homogenized pap, with no grasp of compelling story structure, that gets only one thing right – its diversity casting.

Pandering most egregiously to the new movie genre called “young adult” (that encapsulates series like TWILIGHT, THE HUNGER GAMES, I AM NUMBER FOUR, DIVERGENT, et al – whatever happened to just calling them “teen” movies?), movie is filled with sprinting and fighting and loud soundtrack, and I guess that’s why the only girl in this sausage-fest looks like Kristen Stewart.

Ki Hong Lee is Minho, a Runner who would be won over by the tenacity of Thomas’s searching soul, and the smoothness of his teen buttock. Thomas Brodie-Sangster is Newt, the British brains of the outfit, who oversees the Glade with an embroidered fist. And Will Poulter, recently the annoying kid in Narnia, now all grown up as the muscle, Gally, a stickler for the Glade Rulebook, who takes a dislike to Thomas because he turns his nose up at the Rulebook (which was a lucky coincidence because his nose was already so cutely upturned. Am I right, ladies?).

We hear the Grievers’ plaintive screams in the night; chilling, mysterious. But then they’re revealed as giant CGI bio-mechanical spiders (a la HARRY POTTER, THE LORD OF THE RINGS, KING KONG 2005). Over half my interest – lost. When a Glader is stung by a Griever, they go through painful physical changes. They call this The Changing. (Hmm, a condition where you change that’s called The Changing. I guess they left the naming of that process to one of the younger boys who failed creative writing.) Although, once you see the marauding, steel-toothed death machines, you will seriously wonder how they manage to only sting someone without ripping off half their torso in the process. Whatever. It gets very Darwinian for anyone suffering – snigger – The Changing, as they are cattle-prodded into the maze to meet their death.

Being trapped in the maze overnight one must not only fear annoying special effects, but the shifting walls; luckily, the maze changes shape at the speed of a teen dream running.

Movie is set up very obviously for a second installment, with very annoying loud and thoughtless plot developments. I call those parts The Annoying.

Kaya Scodelario is Teresa, the one female character sent up to the Glade by the mysterious “They.” With a note saying she is the last. Ever. She’s got inexplicable memories of Thomas, she’s got untapped hidden knowledge of They, and she’s got those – and that!

And if the movie was doing nothing for you up to that point, to a teen boy, it’s suddenly watchable; to anyone older, it falls apart. Because the annoying thing is not that the girl is thrown into the mix, but the REACTION to the girl: It’s like testosterone doesn’t exist!

My first thought: “Ah, They want procreation, hence repopulation for all the boys who have died tragically. Here come the primal mating rituals and battle for panty. Shit’s about ta get rayl!” But Teresa might as well be a boy for all the loins she’s stirring.

Newcomers made this movie (director Wes Ball and writers Noah Oppenheim, Grant Pierce Myers and T.S. Nowlin, from the books of Dashner), and it seems they’re newcomers to the human race as well, as they possess a complete lack of awareness of human nature.

These are teenage boys, fer chrissakes! – their alpha and omega of existence is to Fuck Girl. And not one of them seems discombobulated that there’s a prime specimen thrown into their midst. Not one of them is even JELLY that Thomas seems to be making the most headway with her. No peacocking, no primal screaming, no chest-beating, not even any skeevy exposing of genitalia. No providing extra food for the girl, no wayward escape plans to impress her – nothing to win the favor of this real life vagina! Maybe they DO think she’s a boy. I guess that’s why she looks like Kristen Stewart.

You can fill your movie with roaring spiders, closing walls, mechanical mystery, but there are humans at the heart of the story, and humans – when pared down to their basic needs – are about Food/Shelter/Sex. That’s it. A human can live their whole lifetime in a Glade as beneficent as this one, which provides fertile land for crops, lumber for shelters, and the taut asses of 60 young boys. Oh, you mean you want the other sex…Well, heeeeere’s Teresa! Hooray! Now we NEVER have to leave! Once we procreate with her, we’re all young enough to procreate with her offspring and soon we’ll have a community and call it Alabama.

In a community as devoid of conflict as this one, one wonders why they don’t just settle in. If they have no memories, what do they think they’re missing that solving the maze will restore? Have they already flensed the violent and avaricious aspects out of this community, or were they ever written in to begin with? There are makeshift jails, but no one criminal enough to put in them. There are assigned tasks for the whole community, but no one is lazy enough to shirk them. There are wrestling matches, but no one is angry enough to fight harder than being touched up by a bum in an alley. There’s no telling the alpha from the bottom bitch. It’s a community of homogenized automatons with no personalities. You know: Young Adults.

And when the population gets too large from all the Teresa-spawn, well, we can always build a ladder…