So Much Effort, So Little Movie.

Jim Carrey in another 10-star performance. Alas, for a mere 6-star movie. 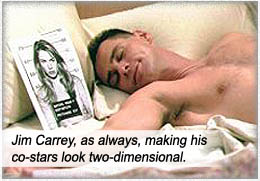 Where one has come to expect simply another mugging, scenery-chewing turn from Jim Carrey, in ME, MYSELF AND IRENE he surprises elegantly with his controlled portrayal of amiable Charlie Baileygates, a disrespected Rhode Island police officer whose retention of insults, barbs, put-downs and slurs over the years causes a flamboyant, narcissistic, violent alter-ego to emerge – “Hank.”

While helping a fugitive (Renée Zellweger) flee corrupt police, Charlie inadvertently keeps reverting to Hank whenever adversity surfaces. At first, the two characters inhabit Charlie’s body exclusively one at a time, but as the stakes ramp up towards the chase finale, the two personalities battle one another for supremacy.

Carrey’s acting skills are never more apparent than in his constant, convincing switching from, as the slogans say, “gentle to mental.” The wealth of nuance and detail with which Carrey fleshes out these disparate personalities is a wonder to behold.

But then… everyone has their own two cents’…

With the Farrelly Brothers helming this project, one can safely say it is not for a family audience, with savage forays into the realm of bad taste, black humor and political incorrectness.
Leonard Maltin, At The Movies.

This movie warrants an ‘R’ rating for its portrayal of harm to minors and animals. The movie requires extensive rewriting, which should see actor Carrey reconciling his recklessness with moral rectitude. We are not concerned with the comedic element, which would, of course, be adversely affected by this rewrite; we are only concerned about saving our children from dangerous cinema which could lead to heroin and dancing.
Bernard Siedelman, MPAA.

I am outraged that the MPAA allowed this movie to pass muster, with its insouciant approach to violence, swearing, adultery, sexual aids, murder, animal mutilation and child-accosting. This film defines the Farrelly Brothers as men of deplorable moral standing. I pray that one day they will look upon the face of Our Lord and Savior Jesus Christ and beg forgiveness.
Oral Roberts, evangelist.

In a world…
where the law makes its own rules…
and justice…
is a two-faced enemy…
one man…
finds that two faces…
are twice the problem.
Jim Carrey…
in a role which will astound you…
in a quest…
to fight for the girl he loves…
against the man he is.
Don LaFontaine, The Voiceover Guy.

Many times have I felt the same black vitriol towards those of flesh color, when they ceaselessly cajole and taunt me for my lack of pigmentation. In this age of tolerance, I am shocked that my people are represented in such a disrespectful manner in this film. When Hank meets Casper and calls him Milky, I nearly wrote a letter to the MPAA, asking for the banning of this movie. We only lack skin pigmentation, not feelings.
David Spangler, Albino Americans Monthly.

At last, a movie that goes against all stereotypes and repreZENTS the black brothers as the brain niggas dey so obfuscatinly IS – Lemme tell you, girlfrayn, dem homies playin’ at Charlie’s boys were de ILLEST, bustin’ Einstein moves like no nigga never done befo, getting’ all cerebral CORtex up in this mofo – Know-wahm-sayin?
Moyesha Jackson, Black Entertainment Television.

This movie kicks My Pet Goat to the curb. It proves Americans are truly dirty and sick and should suffer the wrath of Allah, preferably on September 11, 2001.
Osama bin Laden, Son Of Islam.

This movie kicks ass. It proves Americans are free to be as dirty or as sick as they wanna be.
Dennis Rodman, NBA.

What can I say? I gave Jim Carrey talents which he is using to their fullest potential, while some of you I made as dumb as a bag of hammers. Speaking of which, I have never, ever spoken to George W. Bush.
God (Christian chapter).

The Farrelly Brothers seem to have no knack for creating beige movies. Somehow they find a way to make even the most nondescript scenes “pop.” Their movies never flow with a boring grace that accentuates their underlying lack of storyline and uninteresting characters, like my movies.
John Hughes, director.

I am extremely happy with the way the chauffeur is represented in this movie. For too long, we have struggled against the inherent disrespect of our fellow humans, who call us midgets, dwarves, elves, little people – everything except the right term, which is “human.” At last, a movie that does not differentiate between size, strength and sexual prowess. When Jim Carrey gets a nun-chuk beating from Tony Cox (one of the heroes of our little person’s community), I wanted to write the Farrelly Brothers congratulating them on assigning such a powerful role to such a small person. The fact that Cox stole away Carrey’s new bride, and was a chartered member of MENSA, like myself, gave me enough confidence to try out for the role of the teenage Darth Vader in Star Wars Part Two. Unfortunately, the part went to that whiteboy who couldn’t act.
Samuel K. Washington, S.M.A.L.L. (Small Men’s American League Lobby)

I am in love. Like sunshine on a cloudy day, the birds swooping and warbling, even as the night comes to rest on whispered eaves. Her taut stomach peeking from beneath glad-wrapped t-shirt and cream-cheese bobbin-breasts aching for my silky touch upon her white, bare back and shoulders, pouting lips so full and insatiable, as the stars shine with renewed vigor, anointing mine eyes with the vision of her pale cheeks nuzzling a warm hand emplaced there in hungered affection. Oh Renée, how dost thou hold the moonlight in thy dark eyes, blond tresses unashamedly flowing like waterfall honey upon thy girl-shoulders; oh, Renée: to touch, to dream, perchance to stroke firm skin heated by the furnace of desire, tongue-slick on thy silken neck, jeweled casket lined with slippery buds, accepting, unrelenting, steam-piston propelling, driving, eighteen-wheeled, nerves of steel, diesel fuel – super cruel – Oh God! My pants! –
Poffy The Cucumber, Rebel Newsboy.