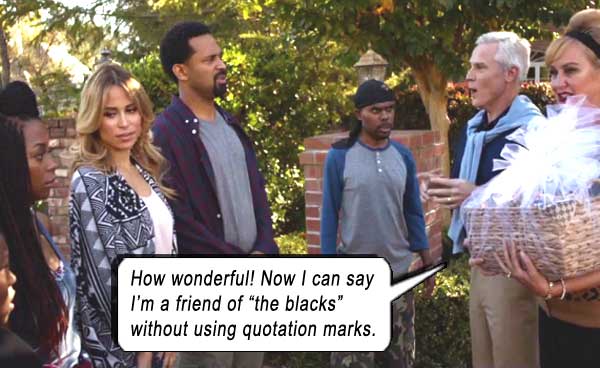 If you haven’t seen the murderous 2013 thriller THE PURGE, then the premise of the screwball comedy MEET THE BLACKS will be even less funny than it already is.

A nuveau-riche African-American family from the mean streets of Chicago moves into a snotty white neighborhood in Beverly Hills, just as the annual Purge takes place.

THE PURGE – the movie about the not-too-distant American future where all crime is legal, including murder, for one night per year – has gained notoriety in our fractured, divisive society where it actually seems like a pretty good idea. Banking on that movie’s cult popularity, MEET THE BLACKS brazenly throws our protagonists into a fish-out-of-water situation while that other movie’s premise underscores the plot. The audacity!

With a lengthy backstory narration prologue that almost strangles the comedy in the crib, we glean that Carl Black (Mike Epps) made off with his drug dealer’s cash during a bust, and – like Jed Clampett – moved to Beverly Hills, bought a mansion and started a new life. (This in itself is a conceit the movie hopes we’ll accept, because you can’t buy a mansion in Beverly Hills with simply a suitcase of cash. Let’s not even discuss the legal formalities and red tape; the movie implies that the wodges of cash Carl surreptitiously gloats over in his small wall safe is what remains of that stolen drug money. But you need literal TONS more than that if you hope to reside in the 90210. Gene Simmons can boast about purchasing his mansion with a suitcase full of cash, but he’s got continual income from innumerable sources after the purchase of the house. When Carl Black’s piddling amount in the wall safe runs out – he’s back on the streets! Onward…)

Carl’s family consist of the usual clichés, not so much to comply with Hollywood thriller protocol, but to match it to the dynamic in THE PURGE – the hot wife (Zulay Henao), the boy-crazy teen daughter (Bresha Webb), the eccentric son (Alex Henderson), and the daughter’s boyfriend (Andrew Bachelor) who tries to gun down her father during The Purge.

Carl meets the white neighbors (including Phil Austin and Kate Enggren), who will do what the neighbors in THE PURGE do – smile to the protagonist’s face and then try to murder him during the Purge – but this time, it won’t be over fiduciary or monetary matters, this time it’s just plain racism.

Carl doesn’t believe that the Purge will encroach on his new life in Beverly Hills, so doesn’t take any precautions – until all the denizens of his Chicago ‘hood come a-calling on him for his past sins. Not to mention, all the white neighbors, for being Black and Too Nearby.

Co-written and directed by Deon Taylor, and made after the second PURGE movie hit theaters (THE PURGE: ANARCHY, 2014), MEET THE BLACKS boasts many great lines and zingers flying all the way through the movie, with Epps’s easy style coaxing laughter from his manner alone, let alone his delivery. But one-liners do not hold a movie together. Most of the other actors turn in dodgy performances, especially Lil Duval as Black’s ex-con friend and a subdued Charlie Murphy as the drug dealer (in his last filmic role, before his death in April 2017). George Lopez is President El Bama signaling the start of the Purge on TV, Mike Tyson’s cameo as a professional clown only proves he is a professional clown, and Snoop Dogg’s cameo as a white guy named Todd is hilarious.

Being stuck with the Blacks in their mansion, while the Purge throws all manner of killer against them, is Purge-atory.