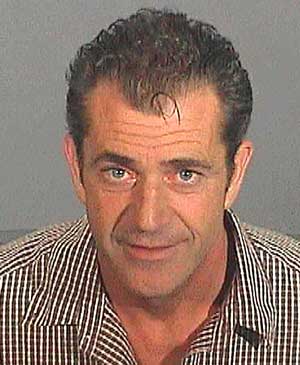 WHAT WOMEN WANT.
Even Mel’s mugshot looks better than my passport, my license and my glamor shots with Bob Guccione combined.

n his last day on Earth, Jesus mouthed off at the Jews sharing his table (Peter and Judas and the cast of extras), calling them ignorant and greedy and the cause of all ills. He was drunk. 1,973 years later, Mel Gibson did the same thing. Look what happened to Jesus.

I’ve been following the Mel Gibson faux pas about as closely as the average cucumber, meaning, I haven’t followed it at all – it follows me. Everywhere I turn, there half-smiles Mel’s Mona Lisa-like smug mug, accompanying splash-text bombarding me with those ludicrous asterisks denoting the letters “u,” “c,” and “k.” Sure, he was outa line; sure, he should have exercised his right to remain silent; sure, his butt looks good in those pants – but in the resulting furor over his asterisked comments, Mel at least has the last laugh as he definitively proves the point he was trying to make through blurred vision and slurred religious slurs:

The Jews will crucify anyone.

But I come not to bury or praise Mel – there is enough media doing both – I come to draw attention to the strident HYPOCRISY of the people maligning and defending him. Because they do so for all the wrong reasons (see above comment concerning butt).

From the public’s insensate puling, it would seem that Gibson has committed a bigger “sin” by speaking his mind than by breaking the law.

In a society where the drunk-driving issue ranks in the top three of shoved-down-our-throats lobbying agendas (along with second-hand smoke and child-molesting teachers), shouldn’t that society be more outraged that Gibson was arrested and then allowed to “walk” for a bail amount which is less than a piss in the ocean for him ($5,000 – which he probably pulled from his back pocket, and still had cash left over for more beer), instead of being incensed over inane, juvenile comments he spouted while inebriated? All we hear about this incident is Jews Jews Jews, invariably accompanied by yet another needless plug for Gibson’s film about some surfer dude from the Bible. Yet it’s not like Gibson rationally composed a manifesto against Jews and published it to worldwide sales; this is no Mein Jewish Kampf. Seems all it takes to get Jewish leaders in an irreconcilable huff is an unthinking drunken tirade (which would have remained a private matter between the arresting officer and Gibson had it not been for the sensationalistic media). Is it any wonder those self-proclaimed “chosen people” have been warring, ostracized, enslaved or ridiculed without respite over the last 3,000 years?

In essence, the United States of (I-defend-your-right-to-an-opinion) America is crucifying Gibson not for breaking the law, but for his FREE SPEECH.

The terrorists must be winning.

I am not defending Gibson, but his comments, though inexcusable, have nothing to do with breaking the law.

And I further believe Gibson made those remarks precisely because of his film about that Judean hippy. Who can honestly know what Mel must have experienced over the past two years from Jewish factions and individual zealots constantly reproving him in public, ostracizing him from social circles, denouncing him in print, refusing him service in restaurants, etc.? The list of indecencies and public condemnation must be endless. In his drunken fervor, he probably erroneously perceived the arresting police as not treating him like a celebrity because they too were part of that now all-too-familiar Jewish backlash. He probably made those comments along the lines of “Not you people and your religious denunciations again!” (That may be why he asked the officer whether he was a Jew. Maybe Mel is the victim of reverse-bigotry.) His comments were idiotic and inflammatory, but ultimately, taken out of context – out of context of Mel’s previous two years of Sheol on Earth.

Producer Arnon Milchan speaks for a vast majority when he whines: “To make all of your money from Jews in Hollywood, and then have a few drinks and say you hate Jews, is shocking.” Milchan’s asinine comment should take into account that 90 percent of people who work for the Hollywood system criticize it every day; Mel voiced what that 90 percent would probably say if they were rich enough to be sure of their bedrock status within the system.

I’m not implying Mel had balls, or that it was a bravehearted stance he took in proclaiming Jewish contempt. He was just drunk. Being drunk, he believed – like we all do when we’re drunk – that he was untouchable, immortal. In his insular, enabled world where his swag for simply appearing at celebrity events totals more than the average wage-earner’s annual income, he is probably right on that count most of the time. Most of the time.

I hope they throw the book at him for his DUI, as they would throw it at you or me. And I am outraged in advance that they won’t. You see, my rancor is aimed at a bigotry that is so ingrained in our species that it is not even regarded as such. Mel Gibson is of the class of people for whom we bend over the couch and grease our sphincters, affording them all the courtesy, kindness and insincere, vicarious love we hypocritically pretend towards all humankind – the rich. Even if he was to suffer the same fiscal or cellblock fate as one of us, all things being relative, it would affect him less adversely. The courts have our records; they have easy access to our taxable earnings, yet when they ascribe a fine of $5,000 to a person making $30,000 a year, why isn’t the SAME PERCENTAGE of fiscal adversity visited upon perpetrators of the same crimes who make $3 million a year? Mel Gibson will be penalized by a system from which his money can buy him immunity. His hearing judge and defending attorney probably sensually spank each other during lunch hour. The legal system (which has nothing at all to do with Justice) will rationalize its leniency towards wealth with lawspeak, but the fact remains – the penal system is designed to keep the rich rich and scapegoat the poor into prison. White-collar crime – by its very moniker – illustrates George Orwell’s portentous saw, “Some animals are more equal than others.”

In the aftermath, Gibson (a devout Catholic; read as “obsessive to the point of gaga”) has had to proclaim he has “battled” alcoholism all his life and that he has entered rehab – using the public’s own idiocy against itself – palliating his Jesus-freak cohorts who believe that only God can stop their drinking. (Apparently God is not powerful enough to stop them from starting in the first place…) As the Bloody Mary episode of SOUTH PARK so succinctly put it: to avoid being drunk, don’t drink. Discipline comes from within, not from some “higher power.” By declaring he is prone to the alcoholic’s “disease,” Mel effectively quells the drunk-driving lobbyists. Now to see about those asterisked Jews.

Gibson apologizes. In print, on TV, wearing those butt-hugging pants – but not everyone is as forgiving as Catholics. Matter of fact, neither are Catholics. The Jews are just doing what every religion has done since time immemorial – trying to kill someone who disagrees with them. In publicly decrying Gibson, they lash their vitriol at all those whose mouths have been stitched shut through “tolerance.” Repress anything long enough and eventually a critical mass will be reached where the smallest incident will spark a nuclear reaction. Just ask married people.

Isn’t it amusing that one of the most powerful factions on Earth (claiming “the Jews run Hollywood” is not far from the truth) is so insecure that one drunken tirade can send them into such a tizzy? Which again proves that we live in a country as timid and hypocritical about its tenets on freedom as it is gutless about having those tenets questioned or tested.

In the United States of (I-defend-your-right-to-an-opinion-as-long-as-it’s-mine) America, Mel Gibson has become, like Jesus, a scapegoat.

And the question remains: will Hollywood ostracize Mel?

In an industry where snide backstabbing is the greatest compliment you can ever hope to receive, where everyone despises everyone through loose gossip and looser ethics, where you are only as hot as your last success, where the bottom-line is the only religion, we need only two words to describe Mel: 600. Million. (Worldwide gross of Gibson’s last film. Note that nowhere in this piece have I mentioned that “last film” by name, yet every single reader knows what I am referring to. If that’s not an indication of Mel’s sine qua non, Hollywood is not an industry of soul-stealing whores.) Add one word: APOCALYPTO. (Slated for late 2006 release, like his last movie, fully subtitled; unlike his last movie, looks quite interesting.) Add two letters: PR. (This rash of fortuitous pseudo-controversy catapults Mel Gibson’s Apocalypto into free publicity mode.) Mel, in any religious denomination, spells money. He may see himself as a Prophet, but the “Jews who run Hollywood” see him only as a Profit.

To answer the ostracism question with a question: What Jew can resist that kind of bankability?

On July 28, 2006, actor Mel Gibson was arrested for drunk driving. He didn’t go quietly. Yet he didn’t speak out using plain English either. Apparently, his utterances consisted of syntactically meaningless syllables, comprised of three asterisks sprinkled liberally amongst his words, like some kind of The Artist symbology (such as f***ing and c***) – some Christian experts call this Glossolalia, or speaking in tongues, and is congruent with Gibson’s effusive piousness. Others believe it’s simply The Word Formerly Known As Fucking.
— by Jon Dunmore © 8 Aug 2006.