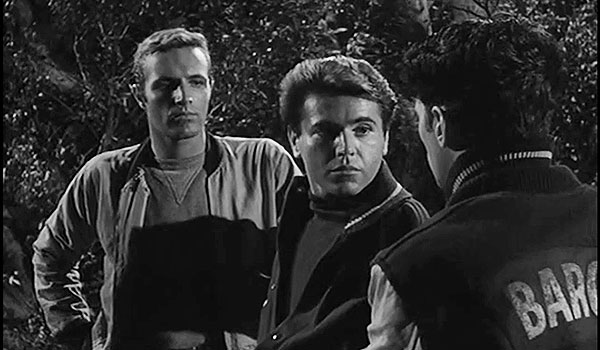 Insipid take on an Ellison classic.

MEMO FROM PURGATORY is a slice-of-life tale (from the 1961 Harlan Ellison novel Memos From Purgatory) about running with a savage Brooklyn street gang. Memos was written after Ellison actually infiltrated a gang called The Barons when he was 19 – for the research! – adopting the alias Phil Beldone, surviving their initiation, taking one of their “Debs” as his mate, rising to be their war counselor, and eventually after ten weeks, disappearing from their existence during a lethal rumble with a rival gang.

And captures NONE of the visceral horror and hovering death that permeated Ellison’s tale!

James Caan (younger than barely legal) plays Jay Shaw (analog for Ellison), adopting the same fake name here, Beldone, and joining the Barons, who are led by a semi-reasonable thug named Tiger (an even younger Walter Koenig, a thick head of hair combed sideways, ironically making him resemble Ellison as a young man). 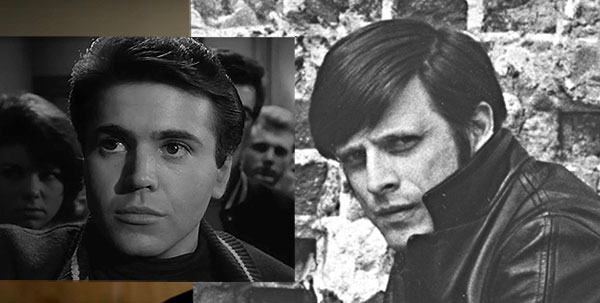 Young Punks: one has spent his life on a starship weaving tales of wonder; the other is Walter Koenig.

The episode deviates from Ellison’s story by watering down the TV presentation until the “violence” resembles any black-and-white teen-sploitation film of the 50s or 60s, where the worst injury is a scrape on the bicep, and the worst insult is “You crummy fink!” All the scenes of “brutal” initiation and small-time crime don’t stir us modern viewers in the least. It’s too dated to be compelling anymore, and even Ellison would write in one of the later edition Forewords of his book that street kids have become a very different species since his go-around. But it’s not only the changing times – it’s the movie not staying true to the book in the worst of ways, leaching the horror of the desolation and the constant threat of imminent death and turning it into overacting sexyboys with blades. Harlan himself writes the teleplay, and admits the finished product is “a vastly changed and fictionalized version of this book.”

The episode’s 48 minutes fly by – powered by the music of Lalo Schifrin, no less! – and it never steps back to examine the bigger picture of what creates street gangs – poverty and low education. It’s a simple, linear account of what happens to Phil Beldone, who is eventually discovered. And while his girlfriend is being accidentally stabbed to death, the police are rounding up his “teen” cohorts… uh, nice wrap. (In the book, Beldone is never found out and manages to extricate himself from the Barons without the Hollywood ending.) Viewed through a modern lens, the film is a corny attempt at thug life, whereas in the book, the depiction of Ellison’s fragile existence through those undercover weeks is blood-curdling.

James Caan, in his first starring role, exhibits the intensity that would win him the role of Sonny Corleone a decade later and shoot him to fame, but it’s not enough to carry this weak attempt at social commentary on juvenile delinquents.