The Film That Stares Into Space.

Your tax dollars at work.

A few years ago, I read about the U.S. military exploring “paranormal combat techniques” in George W. Bush’s Fake War On Terror: using goats as test subjects, the Amerikan Military were trying to train soldiers to kill terrorists by staring at them to psychically stop their hearts. 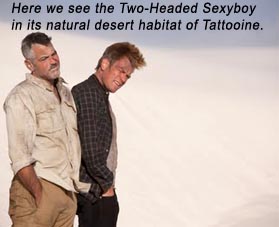 No, it’s not a Python sketch called Twit Of The Year.

Well, I had my impotent surge of outrage over how stupidity knew no bounds and promptly thought no more of it… and now – the movie of the stupidity! THE MEN WHO STARE AT GOATS, about the New Earth Army, formed in the late 70s by The Dude, who claimed his troop had mastered invisibility, walking through walls, “cloud-bursting” (dispersing clouds with their minds), and killing goats by staring at them.

All would be well were this merely a fictional military comedy (and it does provide a few titters), but keep reminding yourself that Jon Ronson’s 2004 book of the same name is a roman a clef on how your tax dollars were misappropriated by the George W. Bush administration to make the Fake War On Terror even faker.

The opening title card informs/warns us: “More of this is true than you would believe.” It should have said: “Caution: Unmitigated Morons At Work.”

THE MEN WHO STARE AT GOATS follows reporter Bob Wilton (Ewan McGregor) as he tags along with a member of the disbanded “psychic” New Earth Army, Lyn Cassady (George Clooney), into the heart of a 2003 Kuwaiti conflict he only wanted to be embedded in to impress his ex-girlfriend who ran off with a guy with a prosthetic arm. (Now we’ve skipped past Python and gone straight to Coen Brothers.)

Cassady tells Wilton how he was trained in the ’80s at Fort Bragg “under a secret initiative, code-named Project Jedi”; that he was a super soldier, a Jedi warrior.

“What’s a Jedi Warrior?” asks Obiwan Kenobi with a straight face. Though director Grant Heslov (he was the young Arab spy in TRUE LIES) assures us it was pure coincidence casting McGregor as Wilton, this inadvertent winking at the audience is distracting, for there are so many references to Jedi in this movie it’s a wonder Lucas didn’t sue. (Wilton/McGregor: “When my wife left me, I was like a blond farmboy on a distant planet…” Oh really, and are these the droids you’re looking for?)

Through flashbacks we meet the pot-smoking, acid-dropping instigator of the New Earth Army, Bill Django (Jeff Bridges, playing The Dude in camo), who apparently coined the slogan “Be all you can be” as a hippie prerogative. He teaches his troops how to dance, expand their consciousness, spread Peace Not War, and stop goats’ hearts with their minds, which Cassady supposedly succeeded in doing a couple of times. Since the Bush admin cooked the books on all war expenditures, not only is there no evidence of the heart-stopping, there is not even evidence that your money was wasted on that propaganda sautéed with lies. Just hearsay. The Amerikan Military might as well call themselves a religion and be done with it.

Screenplayed by Peter Straughan and directed by Heslov without any disrespect to the military, without any irony and, unfortunately, without any point. At first it seems the stupidity of the military is the focus, but the psychs end up being the heroes, when Cassady and Wilton stumble onto a secret desert military facility where they run into Django and a former member of the hippie army, Larry Hooper (Kevin Spacey), who is using the military’s “psychic” powers for War Not Peace; Django promptly spikes everyone’s water with LSD, and he, Wilton and Cassady go about freeing all the goats being used as test subjects. In the process, they also free a group of orange-jumpsuited Arab detainees.

Waitaminute! So this story about futile psychic experiments resolves with doping a whole garrison and freeing goats? The story arrives nowhere: Cassady and Django never do arc to the realization that they were pursuing something faker than George W. Bush’s tears over downed servicemen; Wilton doesn’t really attain any “redemption” (he frees some goats and prisoners – his Psychic Combat story completely derailed at that point); Spacey is characteristically ominous – until he gets doped and then disappears from the story; and there are apparently no repercussions after a whole garrison trips out and goes mentally AWOL for a day and rides tanks through fences and loses all their detainees.

You lost me at Silence of The Goats.

Y’know, the American government has the boneheadedness to try these magic stunts, then is surprised when someone like moron Republican Christine “I’m not a witch!” O’Donnell embarrasses America with her ignorance. If you subscribe to magic and supernatural phenomena – trying to walk through walls and see into the future – then how can you laugh at a woman who is simply the product of that fevered stupidity?

The paranormal department was apparently instigated because the United States heard reports of Russians starting psi-research first. And the Russians only supposedly started it because they thought the Americans were doing it. So Russia has rednecks too!

A scene in the movie mirrors this double-edged stupidity: two merc Amerikan security companies come face to face in a Kuwaiti street; both start firing on each other, both claiming they were fired on first by Iraqis. Ha ha, a comedy of errors and ignorance and small-dick insecurities – you know, your average war.

THE MEN WHO STARE AT GOATS is a funny movie, with solid satirical performances, especially from Clooney and Bridges, and it puts Boston’s More Than a Feeling to good use, but again, here’s the rub, taxpayers: these kooky military guys did all this with YOUR money; funds that were allocated to the military to supposedly “keep us safe,” funds that could have gone to schools and universities (you know, those places that educate people) that were cut in favor of military spending. Is it really any wonder how these dangerous, ignorant imbeciles prosecuted two wars of choice with no exit strategies?

Yet in the final scene, when Wilton DOES run through a wall, we realize our tax dollars ARE being put to good use – in training magical Jedi!