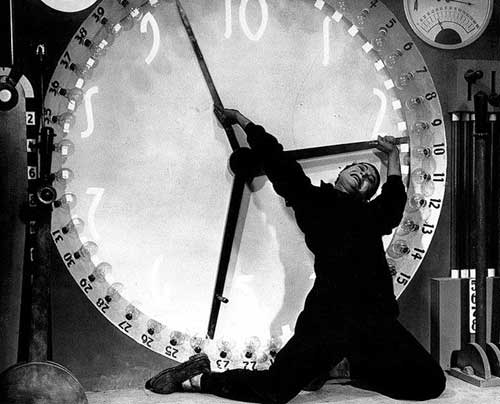 Isn’t it about time for a Kit Kat?

Fritz Lang and Karl Marx had a nightmare-child…

METROPOLIS, Fritz Lang’s stunning 1927 masterpiece on class warfare, is an ancient German expressionist film set in the future – but its message is as current as bank bailouts destroying the world economy.

As soon as mankind aggregated into social groups, class warfare arose, and continues – from hunter-gatherers to Utopian futures – no matter the cognizance of the lower classes of their plight, no matter the platitudes of the ruling classes on balancing the scales, no matter the parties in unbalanced power or the peons being power-driven into cheap graves… We need look no further back than the 2012 American presidential election to see the modern analogue to METROPOLIS – poor little rich idiot, Mitt Romney.

Metropolis is a thrumming factory-state – skyscrapers climb to the clouds, elevated trains thread through them, planes flying between buildings (funny how they don’t “bank” when flying around corners, but just turn like cars!), a seething hive of industrialism, created with matte paintings and process shots, with some intense physical sets. It could be construed as Utopia – but there is a horrifying secret that keeps Metropolis running, buried in its depths… Overlooking the throng like a dictator surveying his kills – Mitt Romney’s father, George Romney (played with elitist brio by Alfred Abel as Joh Frederson). And here’s idiotboy Mitt (played by Gustav Fröhlich as Freder); like the real life Mitten Romney, born into wealth, unable to conceive of how anyone would have the bad taste to not be rich and insular like him.

Soon enough, we are made privy to Metropolis’s horrifying secret – the underground working classes, who keep the city running (yet another version of the Morlocks and Eloi from H.G. Wells’ The Time Machine, 1895); totally isolated physically and mentally from the upper classes. Like today. Like always. The depiction of these workers is where METROPOLIS hits its scariest stride. We see scores of same-looking men, sunken-chested and hollow-faced, filing regimented, heads down, into elevators descending into the bowels of Metropolis, to labor at gigantic machines, most notably the “heart machine” (run by Grot) and the “clock operator” (named 11811). 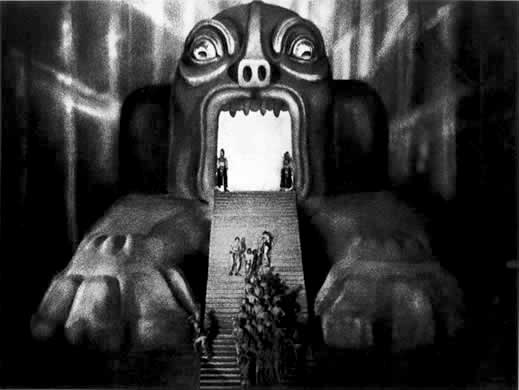 The MGM Grand when it was more fun.

Mitt Freder inadvertently finds his way underground and sees a worker suffer from exhaustion, causing his machine to explode, causing deaths. A new experience to the naïf Mitt – actual work, exhaustion and death. He reports like an ingénue to dada.

George Romney chastises his right-hand drogue, “Why is it, Josephat, that I hear of the explosion from my son and not from you?” Josephat is sacked by Romney (“I love to be able to fire people!”) and banished to work in the depths with the other peons.

Now unlike the real Mitten, young Mitt Freder is curious on how the other half lives. “I just wanted to look into the faces of my brothers and sisters, of those who built the city.” He asks father Romney, “Where are they, those who built this shining city that you are the brain of?” who answers, “Where they belong – in the depths!” Unbeknownst to his father, Freder then travels to the depths and switches clothes with the clock operator named 11811, taking on his job. But his pasty Washington muscles cannot keep up the pace…

METROPOLIS suffers from a lengthy story with strange plot holes and even stranger motivations (e.g. George Romney’s plot to make the workers revolt – ?), created in a time when movie storytelling structure had not yet been invented, yet Fritz Lang hits his grand messages home with iconic vignettes and imagery.

Rise of the Fembots. 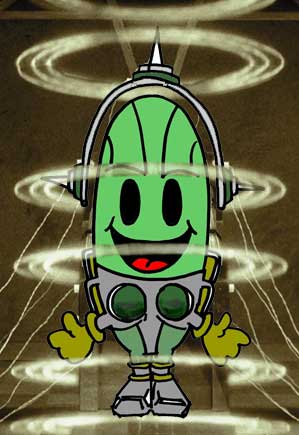 Title card: “In the middle of Metropolis, in a house overlooked by time, Rotwang the inventor.” (Dont you love the name?!) He has everything it takes to be a mad scientist: a midget assistant (probably named Igor), a bionic hand, and a machine that goes bzzz.

Rotwang (Rudolf Klein-Rogge) recreates Hel (the dead wife of George Romney), whom Rotwang was also in love with. This is the iconic female robot (the second ever robot in cinema, after Houdini’s nemesis in THE MASTER MYSTERY, 1919) that is the face of Metropolis in all media. The title cards state it is a “machine man,” even though she’s got a nice pair of rotating harmonic balancers. (Something got in the way of translation, because the real term for her is Maschinenmensch, “machine-human.”) Rotwang tells Romney, “Give me another 24 hours and you won’t be able to tell a machine-man from a mortal.” The metaphor is terrifying. At our juncture of technology, we usually associate “machine-man” with a Terminator-type robot – but think back to the context of METROPOLIS. Rotwang’s dialogue alludes to the men working the machines being turned into machines themselves, i.e. brainless automatons in perpetual slavery to the state.

Brigitte Helm is the robot-woman, turned from steel to flesh with Rotwang’s machine that goes bzzz. She also plays the workers’ gentle princess, Maria, who preaches of the coming of a mediator that will unite the classes. It is an incredibly taxing dual role that accentuates the Madonna/Whore dichotomy. Helm is a good-looking woman even at today’s standards and Mitt Freder falls in love with Maria, while the licentious machine-woman (sent by George Romney) does a naked, pasty-nipple dance worthy of the Whore of Babylon to incite the workers to violence, so that Romney will be justified in using violence against them. She resembles Maria so that the bitter, horny hordes will heed her, as she provokes them to let the machines of Metropolis grind to a halt to start a revolution. 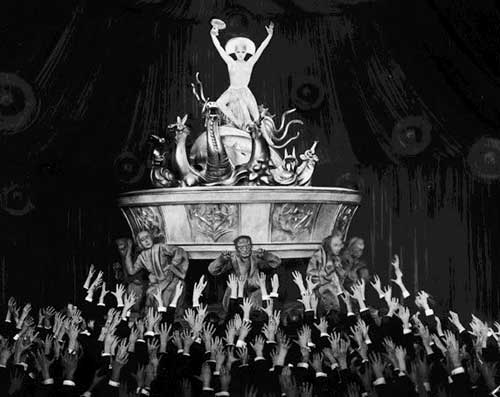 Conjuring a Babel-licious resonance, the machine-woman stands atop the towering “heart machine” hell-raising its shutdown, while Grot tries to explain that a shutdown will destroy the city. (Hmm, sound familiar? Someone cajoling the city to act against its better interests. METROPOLIS has not dated: in 2013, the moron Republicans shut down the United States government, destroying the economy for a little while longer. Cajoling their mindless worker hordes to Vote against raising the debt limit, Vote against health care, Vote against raising the minimum wage, Vote against food and water regulation…)

If the 2nd act was intermezzo, the 3rd act is furioso, as Metropolis explodes in deluge. The Revelation of St. John is cited; the machine-woman runs rampant in scenes that conjure Hieronymus Bosch hallucinogenics; the Seven Deadly Sins come to life; Rotwang appears looking like Ozzy Osbourne, trying to accost the pure-hearted Maria, while the whoring machine-woman is captured and burned. 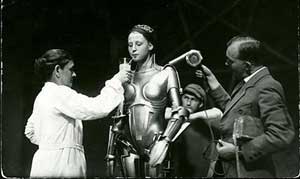 The talented Brigitte Helm, who plays over 10 roles, getting metal-sexy as the iconic ”machine-human.”

In the aftermath, Maria brings a message of hope to Metropolis – which is frankly a surprise. After the film’s dark vision, I did not foresee Fritz Lang (and co-writer/wife Thea von Harbou) aiming at any kind of redemption, but at a scathing cautionary lesson. And Maria’s message is demonstrably bunkum: “Head and hands want to join together but don’t have the heart to do it. The mediator between head and hands must be the heart.” Meaning that son Mitt (who fell for Maria, the working class) intercedes with his elitist, out-of-touch dad to help him empathize with the workers of his city. And they all live happily ever aft—

Like that’s gonna happen! Firstly, Romney Senior is on another plane of experience, cynicism, capitalism; nothing will make him empathize with the lower classes. Even if he becomes their pal for a few short moments while they get the machines up and running again, he’ll eventually revert to out-of-touch boss again, because that’s how people are. Secondly – there IS no resolution to class struggle; there never can be! No business model exists where everyone is a leader and everyone is equal. Not even in communism or socialism, not hippie communes or Alcoholics Anonymous. Even that numb-brained slogan An Army of One is a blatant LIE – you still have to answer to a higher command. There will ALWAYS be shepherds and sheep, leaders and followers.

(I do not discount that in a movie as epic as METROPOLIS, the message might be more nuanced: In a society so disjointed and insular, where the bosses don’t know how to run the machines and the workers don’t know how to rule themselves, is Maria trying to unite the knowledge of the classes, for a better understanding of how society works?…Maybe si? Maybe no.)

And lastly, what audacity for Lang’s wife to write a movie so sympathetic to the lower classes, considering she joined the Nazi Party in 1932, which led to Lang divorcing her!

In the words of Lemmy (Metropolis):
“Metropolis, the worlds collide,
Ain’t nobody on the other side,
I don’t care, I’m not there…”