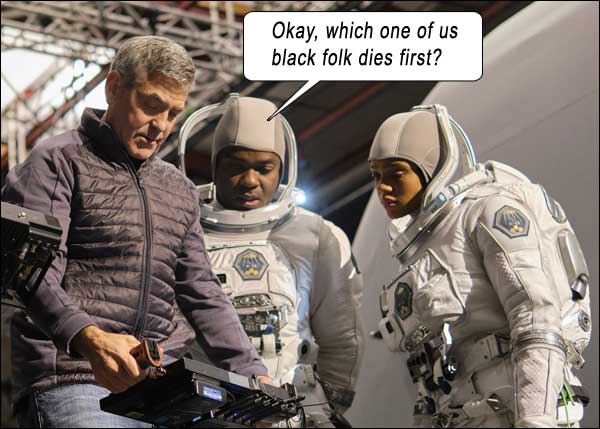 THE MIDNIGHT SKY is indecisive on whether to be a human drama set in space, or a science fiction film loaded with human drama. It ends up sacrificing both genres to George Clooney’s beard.

A worldwide catastrophe has made the Earth’s surface uninhabitable – something to do with republiKKKans blocking climate change legislation, I’m guessing – and whoever’s not dead or republiKKKan is fleeing to underground bunkers. As his scientific arctic outpost evacuates, Augustine (George Clooney) – an astrophysicist dying of cancer – decides to stay. He finds purpose when he realizes he must signal a returning spaceship, from one of Jupiter’s moons, to tell the crew they can’t land because the whole Earth is now shithole countries.

In the process, Augustine finds redemption for his lonely life, caring for a young mute girl named Iris, left behind during the evacuation. And the crew of the spaceship finds that the habitable moon they just explored will be their salvation. Here’s why both these redemptions are garbage.

THE MIDNIGHT SKY, is “inspired” by Lily Brooks-Dalton’s book, Good Morning Midnight, which is a study of loss and regret; in the movie, screenwriter Mark L. Smith allows the protagonist to find a spiritual redemption, but the bigger picture is: there’s no redemption for the human species if the Earth’s only interstellar space ship is turned back around to Jupiter with only 2 humans onboard.

I gotta say, Clooney does an exceptional acting job; bearded like Santa Claus on christmas eve, he looks and feels old, showing off his Tragic Face #3 all the way to Tragic Face #9. He’s got The Movie Cancer – which makes him cough sometimes and throw up neatly in the toilet – and his waking-up scenes sell his dishevelment – we learned the importance of Waking Up Scenes from Tony Soprano – to make us feel the question, “Why am I still here?”

Onboard the Jupiter ship called Aether, this film rewrites all the book’s characters, writing Felicity Jones’s real-life pregnancy into her character Sully, and making her married to the captain (David Oyelowo as Adewole). There’s Kyle Chandler as the Something Space Guy, Demian Bichir as the Other Something Space Guy and a black chick that dies first (Tiffany Boone as Maya). Their mission was to reconnoiter a Jupiter moon called K23 that Augustine himself discovered might harbor life. They are bringing back confirmation he was right.

Movie doesn’t quite successfully flit back and forth between the crew onboard the spaceship and Augustine’s life at the outpost, further diluting our interest when it flashbacks to young Augustine (Ethan Peck) and the woman who shared his bed (Sophie Rundle).

Young Augustine is indifferent while his girlfriend nags that while he tries to find life on other worlds, his own life is slipping away… It’s that old axiom that SEEMS like it’s true – but it’s not! [sigh] It’s just another trope of the dedicated scientist and the dreamkiller girlfriend; what she means is: HER life is slipping away bothering him to pay more attention to HER, while HE is using his life to its fullest potential. She tells him tearfully she is not pregnant. He is serene about it, which only makes her weep harder. Phew, “high maintenance!” Later, after they’ve separated, from afar he sees her daughter. He knows he dodged a bullet – only to have it come back at him with the screenplay— oh I get it, the little girl is the surrogate daughter he never met. And she’s also the device that allows him to explain his plans out loud: “We have to get to a bigger antenna.” You mean: We have to get to bigger human drama. 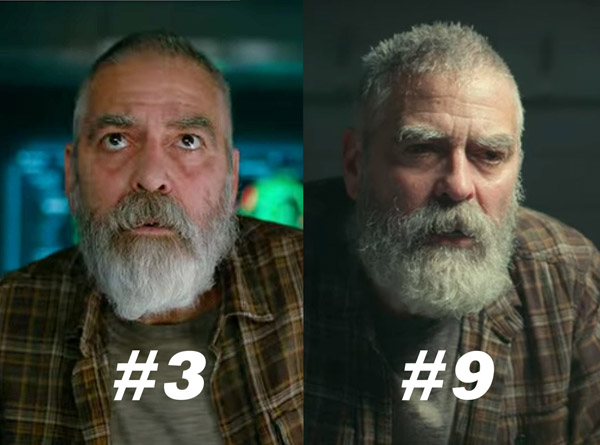 In space, it seems writers can’t come up with anything other than meteor showers as adversity – so – unless space debris is used in starkly new visual ways – as in GRAVITY or the new LOST IN SPACE series – it ends up just the same old boogeyman; there’s the spacewalk to fix the antenna – and during the spacewalk – more unoriginality – I mean, more debris while they’re on EVA – see, you’ve heard ALL these tropes before! After the debris storm, Maya discovers she’s bleeding inside her suit – instead of rushing to get her inside they have a dramatic moment outside first because, Earth may not be able to hear them – but Oscar is always listening.

And it’s the same unoriginal baloney with Augustine trekking through the arctic wasteland – he and Iris discover a plane wreck, escape a sinking ice floe, caught in a snowstorm, arctic wolves – stop me if I say anything original!

Clooney is also director. I commend him for his style and elegance through each vignette; the cinematography is beautiful to look at, and I especially like the interior of the ship, crafted like the pneumatized bones of birds with criss-crossing struts for strength and stability. Problem is, it also falls to the director to stitch all this beauty together into a cohesive narrative. Whenever Clooney switches between vignettes, we live in them so long we forget where we are. Even when Augustine makes contact with Aether, intertwining their fates, the stakes are so amorphous we still feel like someone has cut our tether and we’re just adrift between Jupiter and Give-A-Shit.

You’d think the first thing Augustine would tell Aether is the science behind the planetwide catastrophe – instead, he opens with: “I’m afraid we didn’t do a very good job of looking after the place while you were away.” Really? Jesus christ they’re astronauts, not landlords – they need the atmospheric and ground-based logistics so as to work the problem. This is not the time for rhetoric!

Here’s the annoying part: Sully asks him, “Do you have information on the transmission blackout” and he does answer, but we the audience don’t get to hear any technical talk due to him cutting out with static, but in reality, the filmmakers are keeping this information from us because they don’t want it to intrude on the human emotion bullshit!

Even Sully talks in riddles: Maya “suffered an accident during the flight” – tell him she’s dead. He’s a technician, not a priest. This is what I mean by the human drama intruding on the science fiction.

Kyle The Space Whatever views Earth from a satellite – it’s covered in yellow icky stuff. And Augustine advises the Aether to slingshot back to K23. Then the ASTRONAUTS on the ship use civilian language to explain it to each other because apparently some of them didn’t finish astronaut school.

Kyle and Demian The Other Space Whatever take one of the landers to return to Earth,  while pregnant Sully and her Captain return to K23 – BUT – if two of these guys can make it back to Earth – why not all of them? They’re not implying it’s a suicide mission – they’re going back to a) find Kyle’s family and b) return dead Maya to her homeland – but has anyone considered these two giant tasks? First, they’ll land in the water, and without a pickup from NASA, how do they get to shore? This isn’t a boat, it’s got no paddles. Also, the Earth is toxic so obviously they’ve got to wear their suits as if they’re on an alien planet, which means they’ve got to have their own supply of food and water… then Kyle takes off for his family in a bunker somewhere – how? In a stolen car? Leaving Demian to drag Maya’s casket to her home by himself? Where is her home? Everyone’s underground! Is he also going to steal a car, or is he going to call Uber? When survival is paramount, is it really worth all this effort guys?

Now, I understand THE MIDNIGHT SKY is dealing in symbolism – and that these two returning to Earth symbolize “hope” – but hope is oversold as something real when it’s actually the absence of something real, and the spaceship symbolizes a new beginning for Mankind – but how do you restart the human race with two people and a baby? Are Sully and her husband planning on incesting their children to start society again? They’re all gonna die there, so why not land on Earth and maybe give your kid the chance to spawn another generation with someone in a bunker? Another generation who might find a way to get an actual society up to K23 in that last ever solar system spaceship.

In making the movie symbolic, they’ve pared down the roles and dialogue and science to their barest bones; in doing so, sacrificing science for insufferable Oscar moments.

As he gazes at the midnight sky knowing Aether is leaving, Augustine at last realizes that Sully is his daughter Iris, and that his mute Iris is an hallucination! It is implied that Augustine has subsumed his loneliness all these years in never having met her, and is at least redeemed in being able to save her from Earth’s republiKKKans. BUT – if he didn’t spend his life researching K23, he would never have been able to save her life this way. Which means the high maintenance girlfriend was wrong – his life didn’t slip away – he found life on other worlds to give life to his daughter. See? You were sad that he wasted his life without his daughter. But now you’re weeping for the opposite beautiful reason – that his life did have meaning.

In the end THE MIDNIGHT SKY would appeal to weepy romanticists, but it only holds a lot of potential as a great science fiction tale – and potential is also the absence of something real.