Midway between “average” and “annoying crap.”

MIDWAY opens with a title card: “This is the way it was. The story of the battle that was the turning point of the war in the Pacific. Told wherever possible with actual film shot in combat. It exemplifies the combination of planning, courage, error and pure chance by which great events are often decided.” 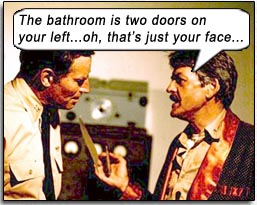 Translation: “This is the way jingoistic Americans perceived the battle that was the turning point of the war in the Pacific; so parochially that even the Japanese speak in swank American accents (and the ones whose accents were too… uh, “foreign,” were insultingly dubbed). Told wherever possible with actual film shot in combat because we were too cheap to create our own battle scenes, and too lazy to even match the models of the planes in combat footage with the same models we used in establishing shots. It exemplifies the combination of Fonda, Mitchum, Coburn and pure Heston by which great events are often decided.”

Henry Fonda narrated a 1942 documentary short called THE BATTLE OF MIDWAY. In this overwrought movie that often reads like a documentary, white-haired Fonda plays the commanding Admiral Nimitz behind the American forces at Midway. Robert Wagner is his young, smartly-combed aide. James Coburn cameos as a captain who tries to advise fogey Fonda and fails. Hal Holbrook is a kind of hippie intelligence officer who decodes the Japanese orders to attack Midway. (“Hippie” in those days meant wearing a bathrobe over your uniform and sipping tea arrogantly.) Charlton Heston is a captain, whose military training to be stoic, clinical and emotionless obviously didn’t affect his overacting; Robert Mitchum, who plays a bedridden admiral with itchy skin, also failed those same classes. Glenn Ford takes command of Mitchum’s aircraft carrier and they share a buddy-buddy scene in the hospital that I’m sure opened a new door for gay porno setups: “I wanna thank you for recommending me to take your task force to sea. Now I have a question for you: Did that itch go to your head?” Cue wocka-chicka music, as we insert new additional dialogue for Mitchum: “Well, why don’t you come over here and see for yourself, sailor!” or “Well, would you like to scratch it?” or “My task force is itching to be taken to sea, captain”…

Midway Island, as its name suggests, was a point midway between good roles for all these actors…

In June 1942, six months after Pearl Harbor’s “surprise” attack (Dec 1941), the Japanese set their sights on the strategic atoll of Midway, smack in the middle of the Pacific Ocean, trying to stage another attack which would really be a surprise. The surprise is that in this supposed action film, much of it is spent by the Americans and Japanese alike standing around map tables conjecturing over how many ships are where and how many planes can go attack them.

The same Japanese admiral who presided over Pearl Harbor’s attack leads Midway’s attack – Isoroku Yamamoto, played by the regal Toshiro Mifune, with a constant puss on his face. I don’t blame him. Not only was he set in his ways, having to sift through advice from his younger, more cautious officers who felt the Japanese forces were stretched too thin, but the mindless filmmakers dubbed his voice with Paul Frees, a guy famous for doing cartoon characters – so Kurosawa’s warhorse and one of the greatest living Japanese actors sounds like Boris Badenov.

Heston’s son (Edward Albert, son of GREEN ACRES Eddie) is a whipped prettyboy with a Japanese love interest (Christina Kokubo). So soon after Pearl Harbor, that sits about as well as a white woman announcing on September 12, 2001, that she is marrying a nice Arab man. This lachrymose love story is inserted sideways into the meat of MIDWAY and is more distracting than Pat Morita’s accent. Not only that, Kokubo is one of the worst actors in history, let alone in this movie. I especially like her line-read: “Dammit, I’m an American!”

High marks must go to the film for its dialogue-driven focus on the political and tactical struggles between all the belligerent brains on either side of the skirmish – and there are some interesting insights into the logistics of war, as when the low-on-fuel Japanese planes are returning to their carrier and the Admiral must make the decision on whether to let them land or sacrifice them to the sea to allow another squadron to immediately launch an attack on an American carrier – but when MIDWAY reverts to action, as moviegoers we expect to see something that will make our hot dogs fly into the bra of the lady next to us, not stock footage badly married to bad acting and editing.

Apparently, much of the combat footage is ripped from TORA! TORA! TORA! And they expect us to squint real hard when they’re trying to match their shots of planes in formation or on studio sets (with constant “clouds” drifting by) with the grainy action shots of planes in real war. Example: the Brits attack in planes that look like Hellcats; you don’t need to know the plane model, just observe their squared wing shape. When one of these Hellcats is shot down, we clearly see the characteristic rounded wings of a Spitfire going down. Later we see an American square-winged fighter squadron – suddenly in the midst of battle we see a gull-winged Corsair fighter– I mean, what the–? Do they even care?

Then there’s the problem of the Japanese fighter planes, the Zeroes. Stock footage of Zeroes going down must be rare because once again a lot of Spitfires take the fall for these Zeroes. Let’s hope no one notices. Especially not those military or naval viewers – hell! if they’re watching this movie at all, it means they’re back from the war and they’ve got PTSD anyway!

Amidst the Hellcats and Spitfires at Midway Island – suddenly a Flying Fortress lands on one wing-wheel. It’s an intense piece of action; it’s gritty, it’s heroic, it’s exciting. And it’s from TORA! TORA! TORA!. It has no connection to anything, no characters are affected by it, no plot line is involved. It’s just there. No context.

Director Jack Smight has a TV movie on his hands that he believes will be fleshed out by his “movie stars,” again underestimating the intelligence of his audience by thinking he could sell it as a feature film simply because Fonda has strode across the screen that way in so many classics and Chuck Heston is making those big screen constipation faces.

Funniest moment: Hero Chuck takes a plane out to go bomb the last Japanese carrier. Dabney Coleman is his backseat second. Their plane gets shot up in the process. Heston tries to land with the crippled plane onboard his friend Glenn Ford’s carrier, but crashes. During his “thrilling” approach, we never see Dabney’s reaction; he has just been excised from the movie while sitting in the seat behind Heston! It’s just closeups of Chuck battling the plane during a bout of constipation. And when the plane explodes on impact, no one seems to care that Dabney just fried as well. Now here’s the funniest moment: Upon seeing the fiery death of his friend, the look on Glenn Ford’s face is like he just ate some cheesecake too fast and needs to burp.

Coincidentally, after you watch MIDWAY, you’ll have that same look on your face.

There is an insidious disrespect dichotomy at work in MIDWAY. The first part of this disrespect is manifested, ironically, in all the American and Japanese actors not displaying one jot of racism towards each other, even at the common soldiery level. The American megastars, we surmise, didn’t want to sully their movie star status by appearing racist, and the Japanese were only reciting lines of an American writer, who we presume was kept on a short leash. It’s almost like the filmmakers were making it too obvious that they were not being racist so that they could get away with racism in a more insidious grassroots manner that no one would even notice. And they seem to have succeeded:

You see, most war movies afford nominal respect to their non-American combatants by allowing them to speak their native language with English subtitles. In MIDWAY, did the filmmakers really think that the Japanese speaking English during war councils contained a shred of authenticity? This not only insults the Japanese, it also glaringly insults the American public, in underestimating their intelligence by taking it for granted they don’t have the capacity to read subtitles. (And the Japanese officer with the swankiest American accent? Pat Morita! Yes, ironically, the person whom we are most used to hearing as the stereotypical Japanese Arnold on HAPPY DAYS is speaking with a John Wayne drawl!) And Japanese charts are all marked in the Japanese language – with convenient English translations right next to the Japanese text on the actual maps. In other words, MIDWAY might not contain one verbal racial slur, but in homogenizing and simplifying the alien Japanese culture, they are not “humanizing” the Japanese, but “Americanizing” them. And is that not the most racist act of all?

MIDWAY will make you question how American cinema ever survived this Dark Age of Ignorance. (Some may opine it never did. I’m inclined to agree, upon viewing any movie starring Rob Schneider or Jennifer Lopez, until I recall movies directed by Christopher Nolan, Martin Scorcese or Clint Eastwood that remind me hope floats).