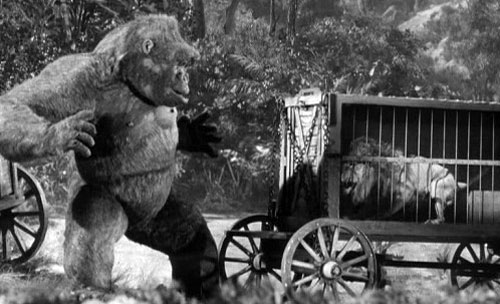 If KING KONG and Disney had a deformed baby…

Ever seen one of those tragic movies that you loved but just wished wished wished it could’ve ended differently? Like SCARFACE or KING KONG or ROMEO AND JULIET?

Well, if you wondered how KING KONG might’ve looked with a happy ending, look no further than MIGHTY JOE YOUNG. Produced by the same filmmakers who made KONG in 1933, writers Ruth Rose and Merian C. Cooper, and director Ernest B. Schoedsack remake their pioneering movie using an ape with a different name, and a different name with a same actor, and think audiences are too dumb to see past the plasticine…

It’s the exact story, Movie Maniacs: an entrepreneur asshole discovers a large gorilla in an isolated jungle, takes it to “civilization” and displays it for cash; ape runs wild, asshole learns a lesson. Matter of fact, the entrepreneur is none other than Robert Armstrong (the same asshole who kidnapped Kong from Skull Island and got him killed at the Empire State), here under a different name, with the same swishy delivery and same motivation as his Carl Denham character from KONG. Armstrong has less shame than a John Boehner Republican, and less acting talent than a plasticine ape.

They’ve tweaked the story slightly by making Kong– I mean, Joe the property of an underage slip of a girl, Jill (Terry Moore), whose overly-innocent delivery is an invitation for mandingo rape, who speaks to the natives in her jungle home like they’re retarded versions of Whitefolk. Comedy-relief explorers, led by Asshole Armstrong, stumble on her paradise, and Armstrong cajoles her into contracting Joe to a Hollywood nightclub. Joe proves much more docile than Kong, actually chalking up 17 weeks of shows before finally going bonkers – and only due to some drunks who ply him with alcohol and cigar-burn him backstage.

Acting is across-the-board theatrical flourish, with everyone talking faster than an Abbott and Costello sketch – except for the slow-witted doofus cowboy and inexplicable love interest (Ben Johnson, a cross between John Wayne and Lenny from Of Mice And Men).

The ape, Mighty Joe Young, is – like his predecessor Kong – a stop-motion masterpiece. Though he was created and supervised by stop-motion pioneer Willis O’Brien (who brought Kong alive in 1933), most of the animation was done by O’Brien’s padawan and soon-to-be successor to his crown, Ray Harryhausen. Joe is not as tall as Kong (about 10 feet tall), but he’s more expressive, and therefore more poignant a character. And the “humanity” he displays in the climax might just wring a tear.

Instead of killing people and being killed in return, Joe rescues some children from a burning orphanage and is sent home to the jungle in peace. Cough-bullshit! This is where the movie departs from suspending our disbelief to Plot Convenience Dumbdown; it’s not the rescue that annoys us – by this stage, Joe has become an empathetic, thoughtful character – it’s how Asshole Armstrong is more than ready to take the blame for Joe’s rampage through his club and willingly releases Joe and Jill from his contract. Without once considering taking naïve Jill to the cleaners over future earnings that he’s losing, breach of contract, and residuals.

There are no dinosaurs, but Joe does tangle with lions and drunks. There is also not as overwhelming a sense of tragedy, diluted all the more with the film’s syrupy happy ending. The happy ending wasn’t the problem – it was the juvenile way the plot was handled and the terrible, terrible acting of Asshole Armstrong. You know how I wish KING KONG ended? The ape falls on Asshole and we’re all better off.