Life really did begin at 40 for Harvey Milk.

Unfortunately, it ended at 48. 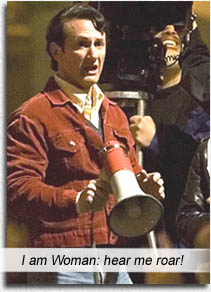 We meet Milk in the waning hours of his 39th birthday, picking up a stranger (James Franco as Scott Smith). Breakneck pacing, we see the new couple open a camera store in San Francisco’s Castro Street, a gay-tolerant neighborhood with the odd dissenter doing the usual “Man’s Law and God’s Law” rant.

Milk, who gave good megaphone, came of age in an era when police clashes with homosexuals was at its height, the late 60s.

Through a series of homophobic public incidents, the bearded and pony-tailed Milk finds his life’s calling in his early 40s, as a gay community activist – the self-proclaimed “Mayor of Castro Street.” After realizing his popularity in a local election, which he loses, he eschews the Haight-Ashbury look for the clean-shaven, three-piece suit, white-collar criminal look.

And is elected San Francisco City Supervisor in 1978.

Milk constantly butts heads with fellow politician, Dan White (Josh Brolin) over gay rights, leading us to believe that White is either Republican or secretly wants to tap Milk’s ass.

The Cuke of Tolerance

After Scott Smith has enough of the megaphoning and politics and leaves Milk, Jack Lira (Diego Luna) becomes Milk’s high maintenance bitch. Emile Hirsch (who Penn directed in INTO THE WILD, 2007) is Cleve Jones, a high-level organizer and seemingly Milk’s successor to the megaphone.

Milk’s major success stories are crammed into montages – boycotting Coors, stepping in dogshit (uh, passing a law to clean up after dogs) and passing a gay rights bill, as well as constantly campaigning for gay rights against the close-minded douchebags in power.

Affecting the local politics, the national voice: singer and god-whore, Anita Bryant leads a startlingly-white organized campaign against homosexuality, claiming she can’t read the bible with gays around. Not surprisingly, America listens.

Eventually, Dan White can’t keep it in his pants any longer and, using a gun in lieu of a dick, pumps Milk full of hot lead.

No compelling reasons are shown on how White the Politician tipped into the frame of mind to become White the Assassin – I think we can all agree every politician is a latent felon. White would be released after five years in prison, on the “Twinkie Defense,” his lawyers arguing that overeating junk food made him premeditate murder.

Makes you wanna shoot someone, doesn’t it?

Sean Penn loses himself completely in the character of Harvey Milk; from his body language to his speech inflections, his gaiety is flawless, and we cannot see one trace of the barnstorming politician and roaring public speaker he played as Huey Long in ALL THE KING’S MEN (2006). Matter of fact, the performances of all these straight men is invisible – they do not over-fruit it, yet give every indication they crave meat in the seat. In 2009, after the lauded BROKEBACK MOUNTAIN (2005) audiences won’t stand for anything less.

Ironically, I suspect that from this point, there will be less tolerance for “brave” yet timid films like PHILADELPHIA (1993), which brought the issue of homosexual AIDS into A-List cinema (ten years too late, I might add), yet with nil chemistry and minimal necking between the leading man and his lover (Tom Hanks and Antonio Banderas).

In MILK, it is heartening to see a film where men kissing seems as natural and emotionally satisfying as seeing any hetero couple making out. These actors are so committed, we never question how challenging it might have been for them to imbue their intimate moments with such passion.

All “serious” films about gay rights in America seem to be regarded by straight tolerant people and the gay community with the same sanctity that anti-gay fundamentalists regard holy writ against homosexuality. Truthfully, there should be nothing special about these movies – or about these people, as brave as they might have been. All those protests and riots that America endured during the 60s and 70s does not reflect the braveness of the rioters or the dissenters, as much as the ignorance of American society. It needed to be told truths already outlined in its Constitution, yet that were obscured by malefactors; it needed to be wounded by its own kind to heal itself.

As politicians have realized in 2009, “gay” is now only an issue with voters over thirty. A new breed of hippie (as in “hip”) has been birthed, a new movement of dissenters and anti-authoritarians who couldn’t give a Brokeback over whether people are gay or straight or anywhere in between.

They’re called kids – ironically, the demographic that anti-gay people are trying to protect from gays. In reality, they’re trying to protect THEMSELVES from the kids who are going to vote them out of power some day. That day cannot come soon enough…

Milk saw something deeper than ephemeral personal gain in holding political office, “I’m not a candidate. I’m part of a movement. The Movement is the candidate.”